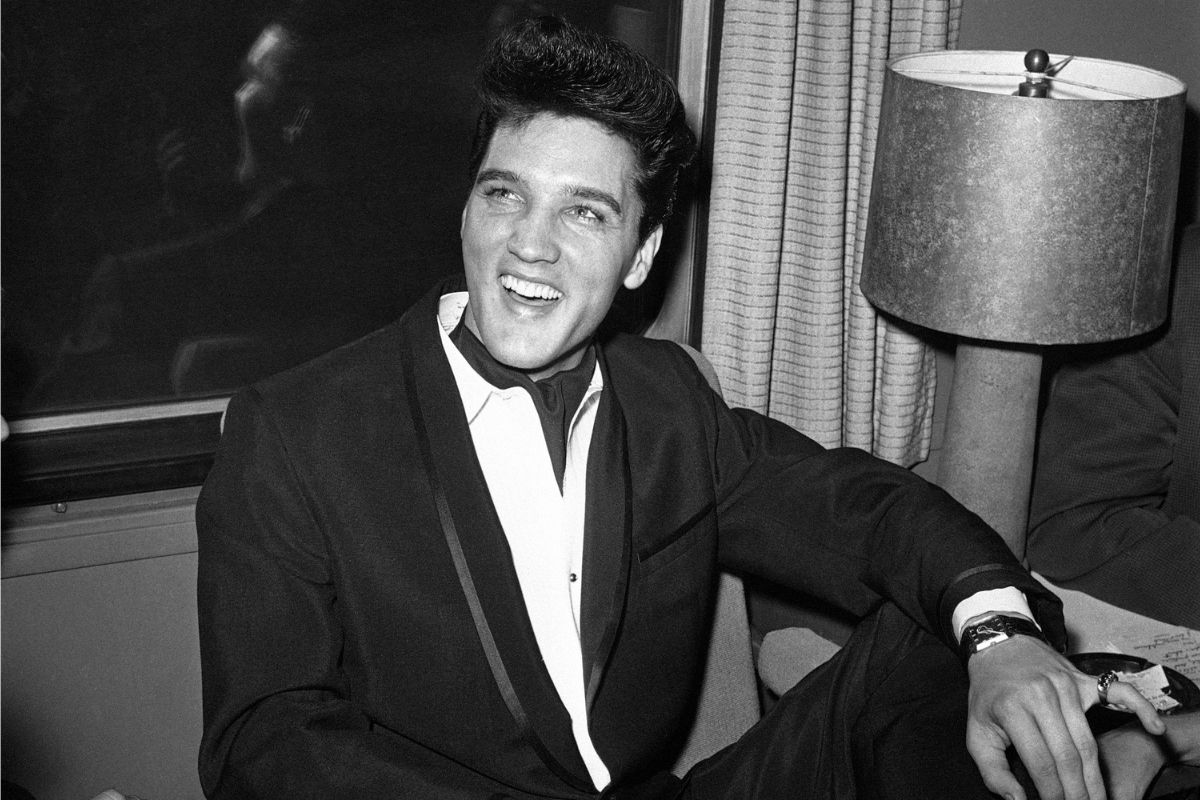 The year was 1956: Dwight D. Eisenhower was competing for reelection, Grace Kelley was a princess, James Dean was the rebel without a cause, Ed Sullivan ruled Sunday night primetime, and all the teenagers were hanging out listening to ?Heartbreak Hotel.? Elvis Presley’s first RCA single was an instant #1 hit that made Elvis a household name. In September of that year, capitalizing off the mania, Ed Sullivan took a chance by booking this controversial guest ? and the two of them made television history.

America was ready for Elvis. His career took off during a decade that?s now synonymous with the rise of the American teenager. Following World War II, the baby boom was in full swing, schools were integrating, and white flight was flooding the suburbs. The image of the nuclear family was born, and with it, a recognition for that tricky adolescent unit: the teenager. Experiencing comfortable middle-class wealth for the first time, many families spent disposable income on televisions, kitchen appliances, and automobiles. Teenagers started to drive their own cars. And when teenagers drive their own cars, they play their own music. That?s where Elvis came in.

Borrowing heavily from gospel, country, and African-American blues artists, Elvis occupied a space between genres that eventually came to be known as… rock ?n? roll. Straddling different categories and transcending class, the quirky rock sound had wide appeal. Elvis? unusual twang and moaning voice tugged on new listeners? ears. What is he even saying? Many people wondered. But the unique sound was here to stay. John Lennon described hearing ?Heartbreak Hotel? the first time, ?and having my hair stand on end. We’d never heard American voices singing like that. They always sang like Sinatra…? A few months after the release of ?Heartbreak Hotel,? Elvis recorded ?Hound Dog,? another roaring success. At a time when so many Americans were attempting to succeed through convention, Elvis? meteoric rise seemed to embody a new, alternate version of the American dream.

Before the counterculture of the 60?s, the 50?s carried its own social breakdown: subculture. The teenage subculture set the tone for the rise of fresh art, and in turn arose from the spread of art itself. In 1957, Jack Kerouac’s On the Road would be published and define existential fantasy for the average young American. Of course, not everyone so pleased with these breakthroughs. Many conservative figures worried about the corruption of the youth, especially when it came to rock ?n? roll. Elvis? (iconic) gyrating hips were not helping the cause.

It was a tough decision for Ed Sullivan to decide to feature Elvis Presley during that fateful fall of 1956. Elvis had already appeared on The Milton Berle Show on NBC to sing ?Hound Dog,? a performance which Ed Sullivan called ?dirty and vulgar.? That?s no surprise; Ed Sullivan?s popular variety show was a cornerstone of early television and was not attempting to challenge any typical ?family values.? But on the other hand, Elvis? appearance would promise The Ed Sullivan Show vast viewership and mass publicity during an ongoing ratings war with Steve Allen’s tv show on NBC, which featured Elvis in July of that year. Eventually, the decision was made. CBS would pay Elvis a whopping $50,000 for three scheduled appearances. Elvis, who was on break from filming his first movie, Love Me Tender, would fly to Los Angeles for the first appearance on September 9, 1956.

During the televised performance, Ed Sullivan actually did not appear due to a life-threatening car accident. The British actor Charles Laughton took his place in New York City and introduced Elvis, via satellite, with the following famous words: ?And now, away to Hollywood to meet Elvis Presley.? Elvis sang ?Love Me Tender,? from his upcoming film, ?Don?t Be Cruel,? “Hound Dog,? and “Ready Teddy? by Little Richard. While performing ?Hound Dog,? the camera famously cut to film Elvis waist up only to avoid any hip gyrations making their way into impressionable eyes of Americans everywhere. (Thanks, CBS.) Check out the editing below.

The episode garnered 60,000,000 viewers; 82.5% of people who watched television that evening were watching Elvis. (Take that, Steve Allen!) But the ratings explosion denoted more than a commercial triumph for The Ed Sullivan Show ? or Elvis Presley, for that matter. As the most recognized host in America, Ed Sullivan was something of a gatekeeper to polite society. This idea was satirized in Bye Bye Birdie, the 1963 musical based on the phenomenon of Elvis Presley.

Following the first performance, Ed Sullivan called Elvis “a fine boy” and eagerly promote Elvis’ upcoming second and third appearances. With the $50,000 CBS deal, new spectators were invited into the world, and legend, of Elvis Presley: the man who would not only mainstream rock and roll but rock the standard state of pop music. For years to follow, the two dueling genres would be one and the same. Elvis? appearance on The Ed Sullivan Show marks that shift, not just in American musical life, but worldwide.

The Death and Decline of Elvis Presley

Elvis Presley?s initial appearance on Ed Sullivan, apart from boosting his own career, paved the way for new talented acts to access key demographics. Among the big names: The Beatles, The Supremes, The Doors, Buddy Holly and the Crickets, and the Rolling Stones, although most of those show appearances also sparked controversy. Meanwhile, the king of rock ‘n’ roll continued his musical reign, experiencing countless highs and lows over the next twenty years. There were so many more hits, like ?Suspicious Minds, ?Can?t Help Falling in Love,? ?Jailhouse Rock,? to name only a slim fear. And a lucrative career in film. There was his marriage to Priscilla Presley and the birth of Lisa Marie Presley. The divorce from Priscilla Presley. The prescription drug abuse and weight gain. Then there also was the comeback special and Live from Memphis and a string of profitable Las Vegas concerts. But none of it was enough to save Elvis, who died in 1977 at the age of 43. He had a heart attack while at home in his Graceland estate. And yes, he was actually using the bathroom at the time.

However, less was understood at the time about the extent and effects of Elvis? drug use. Elvis? personal physician, ?Dr. Nick? liberally prescribed Elvis opioids known to cause ?savage constipation.? In 1980, Dr. Nick was indicted for overprescribing both Elvis and Jerry Lee Lewis, but acquitted. In 1995, his medical license was finally revoked. But the damage was done. As Dr. Howard Markel so eloquently put it in his medically minded column for PBS: ?In the end, he died a lonely man whose ornate home became the embodiment of ?Heartbreak Hotel.?