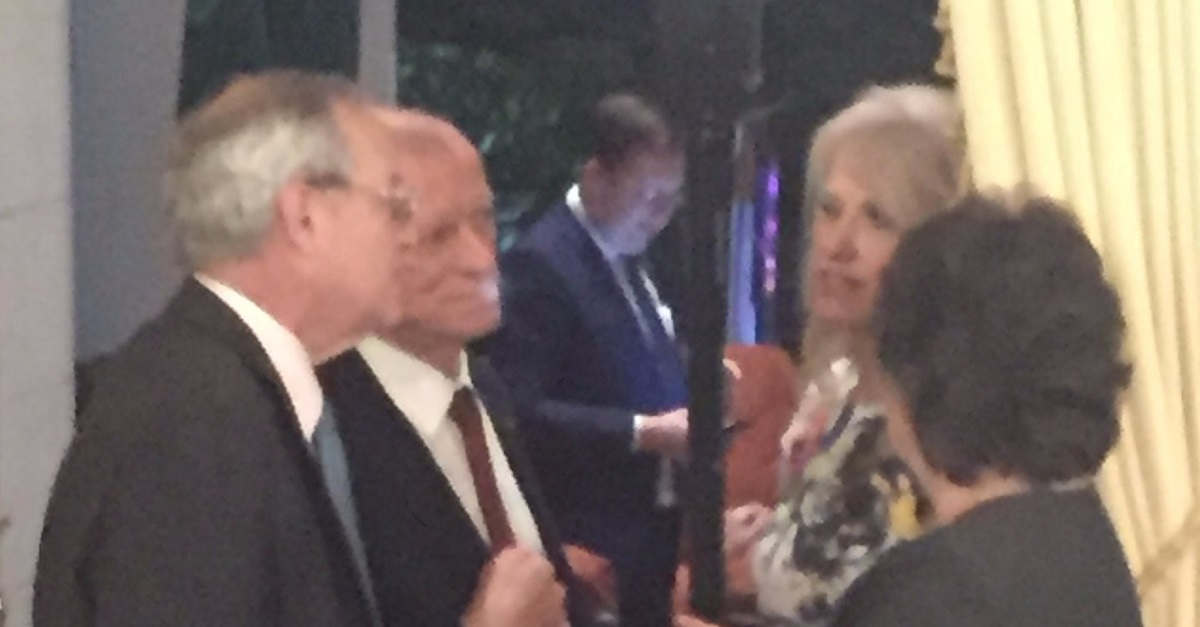 A guest at a party on the night of Friday, June 9, claims to have seen and heard White House Counselor to the President Kellyanne Conway spilling information to members of the press, including reporters for the Washington Post.

RELATED: President Trump speaks out after allegations that he leaked classified intel to the Russians light up Washington D.C.

She held court for an hour or so as folks cycled in/out of her circle. She said Trump gave her a line to talk about "the tapes" to press 2/

She said Trump told her to say "Jim Comey will have to wait and see about the tapes"; she added "I chose to convert that to 'no comment'" 3/

…and laughed. Here's where she put those "no comments" and "I can't comment on that" in action: https://t.co/HBzRiIkvtV

She also reportedly told stories about other White House staffers, including Chief of Staff Reince Priebus (“He should just be honest: ‘I’m upset because there’s someone working on a story who pronounces it RAYNSE instead of REINCE'”); White House Director of Legislative Affairs Marc Short (“Honestly, what the fuck does Marc Short do all day?”); and another unnamed staffer who reportedly “says ‘dude’ a lot.”

She had a good/cruel riff mocking @Reince45 in WH staff meetings.
"No leaks guuuys" she said, mimicking him in a dopey voice. "Seriously" 5/

"He should just be honest: 'I'm upset because there's someone working on a story who pronounces it RAYNSE instead of REINCE.'" 6/

Before some WaPo folks joined her, she was talking about recent weeks in the WH to some other party guests. This expression was telling. 7/ pic.twitter.com/pR8KIuZSsF

The unnamed party guest writes that Conway was likely talking to Washington Post reporters “off-the-record,” meaning that if the details of the conversation were reported, her name would not be used.

I should mention that @KellyannePolls was probably talking OTR to @costareports @danbalz and @PhilipRucker — but loudly, at a DC party.