Straight out of a comic book, this real-life “Joker” is in custody after the cops didn’t get his punch line 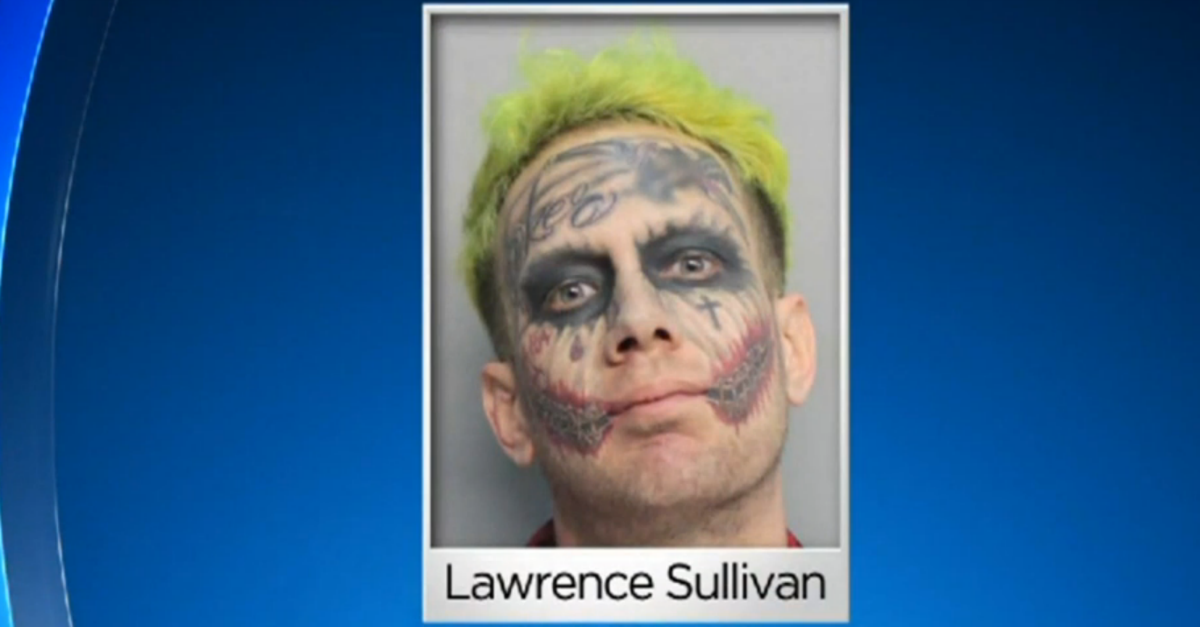 Most critics agreed that the movie “Suicide Squad” was a disappointment, but don’t tell that to Lawrence Sullivan, a 29-year-old Miami man who is in custody after he was arrested on Tuesday evening in Miami. Sullivan has dyed his hair green and covered himself in tattoos reminiscent of the “Joker” character from “Suicide Squad” and, of course, the “Batman” comics.

RELATED: Woman accused of inviting a man over to rob him at gunpoint had a mugshot we’ll never forget

CBS Miami reported that police were called to an area in southwest Miami at 6:30 p.m. on Tuesday after they received reports of a man “pointing a gun at passing cars,” but they probably weren’t expecting the Joker. Law enforcement officials found Sullivan wandering by the gates of an apartment complex, and after questioning the would-be supervillain, they patted him down and discovered a Smith & Wesson .380 in his pockets — six rounds were in the magazine. He was then arrested and charged with carrying a concealed weapon.

Sullivan has put a lot of time into his look in hopes of resembling his fictional hero. The tattoos around his mouth resemble the scars from Heath Ledger’s character in “Batman,” and the word “Joker” is tattooed on his forehead. Another tattoo, on the right side of his forehead, features the Batman logo pierced by a knife with the words “fuck Batman” scrolled across the wings. There are also a few anti-Christian decorations, including the numbers “666” and an upside-down cross.

RELATED: This Portland man wasn’t about to take his mugshot without his fine-feathered friend right beside him

In a court video released by NBC, Sullivan declined the services of a public defender, saying, “I’m trying to get bonded out.” The presiding judge noted in setting Sullivan’s bond that he has been arrested before, in 2006 and 2013, for possession of marijuana. The judge set bail at $5,000, a standard for a first-time offense on a firearms charge.

NBC reported that Sullivan’s occupation was listed as “tattoo model” on the arrest report.