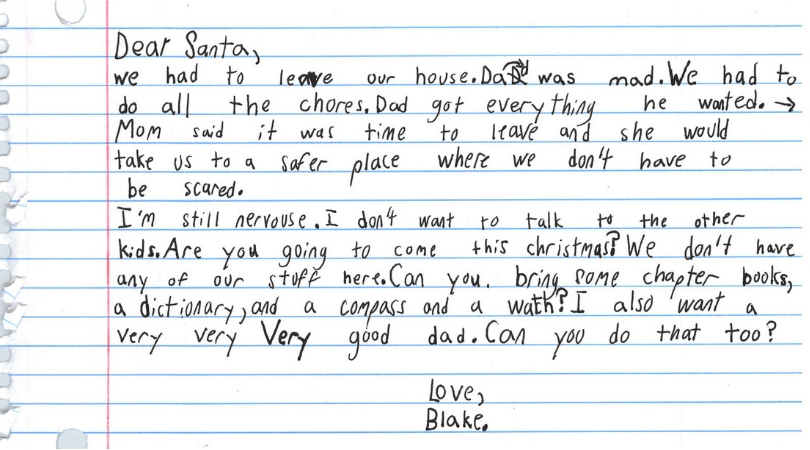 The boy, named Blake, asked St. Nick to bring him a “very, very, good dad” for the holidays. Blake’s letter read, “Dear Santa, We had to leave our house. Dad was mad. We had to do all the chores. Dad got everything he wanted. Mom said it was time to leave and she would take us to a safer place where we don’t have to be scared.”

Blake and his mother arrived at the shelter just before Thanksgiving. According to Micah Thompson, the organization’s Director of Marketing, the boy’s mother found the letter a few weeks ago in the young boys backpack. It read:

“I’m still nervous. I don’t want to talk to the other kids. Are you going to come this Christmas? We don’t have any of our stuff here. Can you bring some chapter books, a dictionary, and a compass and a watch? I also want a very very very good dad. Can you do that too?”

Thompson stated that staff members often find similar notes from other kids as well, but chose to post this one on social media to show what children go through. They believe the letter was an emotional mix of a normal a child asking Santa for Christmas gifts, but also explaining what it is like to be a child who is far away from his home, and in a “scary place for the holidays.”

While these domestic violence victims may not be in their own homes this holiday season, the North Texas nonprofit facilitates programs and events to ensure children feel the holiday cheer. One program called “Santa’s Sack,” asks residents from the county to donate several gifts for the children. Then, the organization creates a makeshift “toy shop” where the mothers can shop for free presents.

Luckily, thanks to donations, Blake will have his Christmas requests this holiday. The organization received more than 10,000 donated gifts, where staff also set a store in the shelter where the children can shop for their moms. Thompson stated the shelter has more children than moms, as women sometimes bring multiple children with them.

Around 1,400 children and women came through SafeHaven of Tarrant County’s shelters in 2018. She stated, “We have babies who are born while a mom is staying in a shelter, so we have newborn all the way up to 18 years old staying with mom.” If you know or suspect that someone is a victim of domestic violence, you can call the National Domestic Violence Hotline 1-800-799-7233.