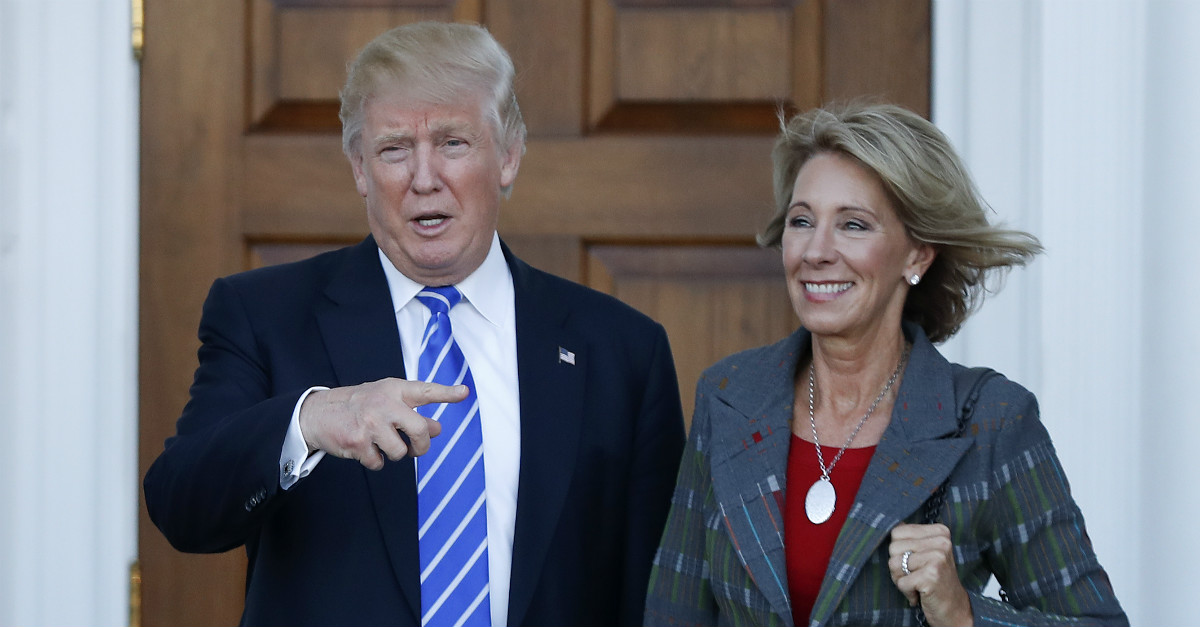 It’s no secret that President Donald Trump has nominated some questionable candidates for Cabinet positions – Rick Perry for secretary of energy and Ben Carson for secretary of housing and urban development to name just two. But the controversy surrounding another of his nominees is surprising given her decades of experience in her field: Betsy DeVos for secretary of education.

Yesterday, two Republican senators announced that they would vote against DeVos’ confirmation, calling her unqualified and paving the way for a possible tiebreaker vote by Vice President Mike Pence. If one more GOP senator defects, DeVos’ nomination could be in peril.

These developments are odd considering that DeVos has been a trailblazer in education reform for decades as trustee of numerous school choice organizations, including the Foundation for Excellence in Education, the American Federation for Children and the Alliance for School Choice.

The fact that DeVos’ long list of qualifications would be called into question demonstrates the purchase that teachers’ unions have over public education. But the scaremongering over DeVos’ yearning for “privatization” should ring hollow after watching her testimony.

DeVos repeatedly called for the Department of Education (ED) to play a passive role under the Trump administration, allowing state and local education agencies to experiment with many types of education reform — public, charter, and vouchers, to name just three.

RELATED: With Betsy DeVos in the hot seat, Democrats act as lapdogs for the teachers’ unions

In fact, DeVos was asked directly whether ED would mandate any sort of national school choice policy. Her answer was a no, pointing out that legislation would be necessary for such a major change.

The fact of the matter is that public education is largely a function of the states. In fact, for most of U.S. history, the federal government had no role whatsoever in its administration. It wasn’t until 1965 that the feds started playing a grant-making role with the passage of the Elementary and Secondary Education Act, which gave away funding for underprivileged students known today as “Title I.” ED itself wasn’t founded until 1979.

One would think that such an influx of money and resources from the federal government would have improved educational outcomes. But, to the contrary, student achievement as measured by the National Assessment for Educational Progress (also known as the “Nation’s Report Card”) has flatlined while funding has skyrocketed adjusted for inflation, as shown by the Cato Institute’s excellent chart below.

Simply put, ED’s performance has been horrendous given the amount of time and monetary resources it’s had to get its act together. If a well-meaning and well-qualified education reformer like DeVos cannot be confirmed, then President Trump should threaten to abolish the department completely.

Such an action would not be as radical as you might think. In fact, abolishing ED was in the official GOP party platform every year between 1980 and 2000. President Trump, for better or for worse, has already shown himself to be a man of his word when it comes to executive orders. Perhaps the threat of a departmental dismantling could be the final push to get DeVos through.

And, if not, President Trump does not need to bluff. By eliminating ED, the feds can let a hundred flowers bloom — or, rather, 50 — as the states experiment with education reform for the betterment of America’s children.