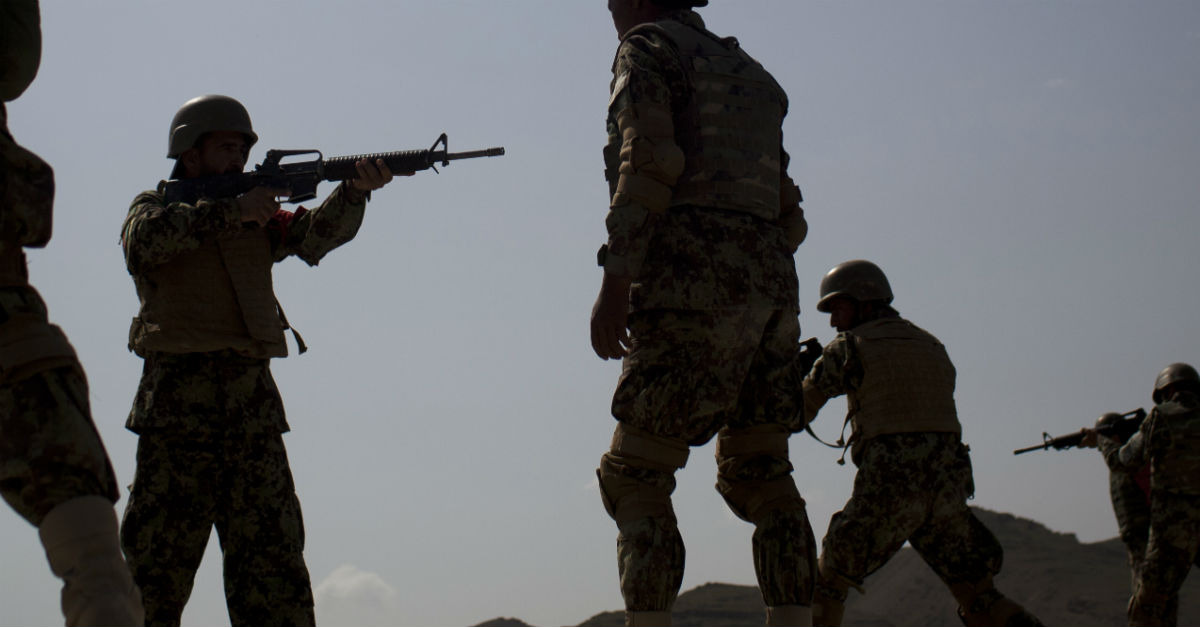 (AP Photo/Anja Niedringhaus)
In this Wednesday, May 16, 2012 photo, Afghan National Army soldiers train with their M16 rifle at a firing range at the 203 Thunder Corps base in Gardez, Paktia province, Afghanistan. A disturbingly high number of so-called "green-on-blue" attacks, a U.S. military term for Afghan soldiers killing their NATO counterparts, has resulted in 35 deaths in 2011 and 22 so far in mid 2012. Col. Asif Khan Saburi, in charge of training army recruits in five provinces, said the increase in attacks prompted a ban on international soldiers being at firing ranges. In May 2011, a U.S. Army team led by a behavioral scientist released a 70-page survey that revealed both Afghans and American soldiers hold disturbingly negative perceptions of the other. (AP Photo/Anja Niedringhaus)

Since the 1990s, military officers and enlisted men have been carrying an M4, and it has been the primary weapon for infantrymen since 2015. Prior to the M4, soldiers were armed with M16s, which are still relatively common in the armed forces. However, both weapons may soon become relics as the military is eyeing bigger guns.

RELATED: U.S.Army releases the harrowing final photos taken by a combat photographer moments before her death

While there is no set timeline, Army Times reports that the new rifle could see action by 2020. The website spoke with Major Jason Bohannon, an expert in small arms who works with development, who stated that the Army has been conducting a study and surveying new weapons since 2014. One study cited the decreased effectiveness of the 5.56 bullets fired from the M4/M16 at longer ranges, specifically at distances over 300 meters. The military could be adopting larger bullets–in the 6.5mm to 7mm range–which may prove more lethal.

The M4 and M16 platform dates back almost a century to the M1 in the twenties. All servicemen are familiar with the platform, but Major Bohannon predicted that “[the Army’s] next investment will likely be in a new operating platform.” The next weapon in the series, the M27, is significantly more expensive and still uses the 5.56mm bullet. There were a number of changes between the M4 and M16, including a shorter barrel and retractable stock in the newer model.

TheBalance.com looked at some possible alternatives, including firearms by Barrett, Heckler & Koch and Colt. The United States Special Operations Command is already using small arms that fire 6.5mm rounds. While there haven’t been any definite decisions, the age of the M4 platform could finally be coming to a close.