We should absolutely shun neo-Nazis and Charlottesville white nationalist marchers 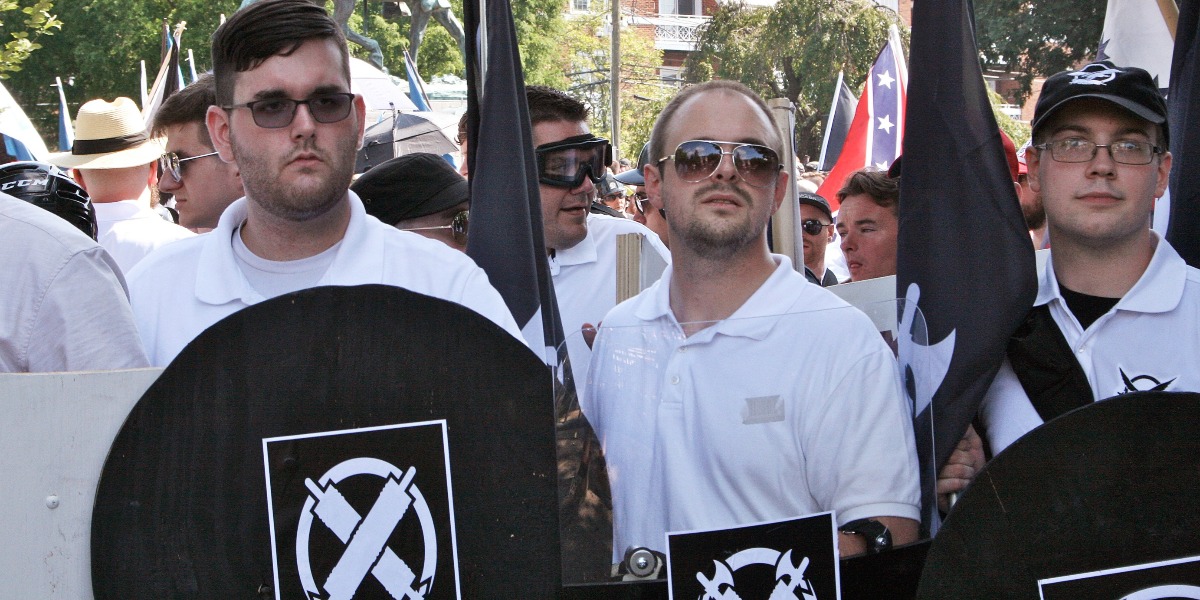 Alan Goffinski via AP
In this Saturday, Aug. 12, 2017 photo, James Alex Fields Jr., second from left, holds a black shield in Charlottesville, Va., where a white supremacist rally took place. Fields was later charged with second-degree murder and other counts after authorities say he plowed a car into a crowd of people protesting the white nationalist rally. (Alan Goffinski via AP)

?Hey! What about my freedom of speech??

We?ve all heard that before after some wannabe firebrand gets himself kicked out of a Facebook group or shouted down in a conversation. The First Amendment, this edgelord insists, not only protects his right to say stupid and hateful things but also forces you to listen to him and act as if his statements have a single thread of validity.

Not so, my friend.

Here?s a quick flowchart to help you figure out if your First Amendment rights are being violated:

Is the government silencing you by threatening you with fines, jail time or death? Congratulations, your First Amendment rights have been violated.

Is a private individual telling you to shut up or kicking you out of a privately owned space because he thinks you?re a bigot? Nope. Not a violation.

The first four words of the amendment make it clear: ?Congress shall make no law? abridging the freedom of speech.

That means Nazi LARPers get to march around with their stupid Tiki torches, but it also means it?s open season for Nazi shaming (not to be confused with the internet sensation known as ?dog shaming,? although not dissimilar in principle).

Leading the charge is the Twitter account @yesyoureracist, which has been working with other social media users to identify and publicly expose anyone who marched with the white nationalists at Charlottesville. At least four people have already been fired after their employers became aware of their participation in the rally.

But wait, getting fired from your job for attending a political rally has to be a violation of free speech, right? Wrong.

RELATED: Pathetic white nationalists go from winning to weeping as America shuns them

According to a report by MarketWatch, the Civil Rights Act protects employees from being fired for their ?race, color, religion, sex or national origin,? but not for their political activities. Even in those few states that protect employees from retaliation for political speech, the employer could still fire a Charlottesville march attendee on the legal grounds that an employee who customers knew held hateful, racist views could not properly perform his job.

If you?re part of antifa (seriously, please just change your name to ‘antifash,’ because nobody knows how to pronounce ‘antifa’), a protester or just an American concerned about the apparent resurgence of white supremacist groups, the best thing you can do is work within the bounds of law and order to expose racists for the hateful losers they are.

Attempting to silence them with violence, whether of the mob or state-sponsored variety, won?t work. These people thrive off of persecution and chaos, and ‘punching Nazis’ (a phrase I?ve been seeing all over social media) will only make them stronger.

White nationalists voted for the ‘law and order candidate’ because they saw ‘their’ country being overrun by leftist scum, and they wanted it back under control. Their uniform of khaki pants and (ill-fitting) polo shirts was an attempt to portray themselves as law-abiding, clean-cut, all-American boys in contrast to the vulgar rabble that make up antifa. They didn?t even wear masks. This march was an attempt to take white nationalism mainstream.

Thankfully, the @yesyoureracist account and several employers have refused to let that happen, and their approach is far superior to the occasionally violent histrionics of antifa. The solution is not to beat the Charlottesville marchers into submission or scream over them but to calmly and firmly tell them their ideas are not welcome in this country. Respecting the right to free speech does not mean respecting the ideas being expressed.

If you marched for white nationalism in Charlottesville, you should fully expect to be shunned by everyone outside the alt-right movement. It doesn?t matter if you?re not a Nazi. You knew they were welcome and in attendance, and you chose to march in solidarity with them, one of whom allegedly killed Heather Heyer and many of whom gave their approval to that alleged act of terrorism.

Perhaps loss of employment and isolation from family and friends will further radicalize the marchers. But maybe, just maybe, these deprivations will lead to a ?prodigal son? moment in which they finally come to their senses and realize that hate is baggage.