Rand Paul: “It would be a really rotten, no good, bad idea to have ground troops in Syria” 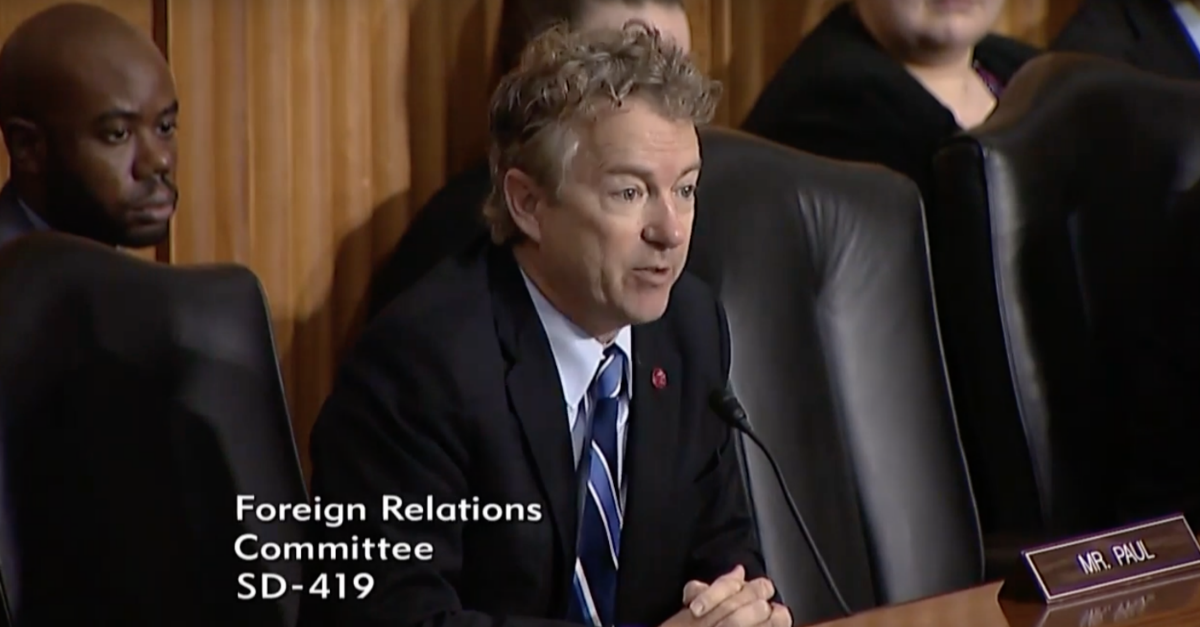 In 2015, I asked, “Why is Rand Paul the only Republican who knows our foreign policy is crazy?”

Among the crazy characteristics is the U.S.’s constant habit of intervening militarily in other nation’s civil wars.

RELATED: Why is Rand Paul the only Republican who knows our foreign policy is crazy?

The senator vehemently rejected sending American troops to Syria, “I’d like to go on record as saying that it would be a really rotten, no good, bad idea to have ground troops in Syria, and very naive to think you’re going to put 1000 troops in there, and everybody’s going to welcome us.”

“We can win any battle,” Paul said. “But when we big we usually go big, and sort of, there have been many people – the Powell Doctrine – go big or don’t go. 1000 soldiers?” Paul inquired, appearing to note that this number would not be enough should the U.S. decide to escalate our military efforts in Syria.

A year ago during the campaign, Donald Trump said he would consider sending up to 30,000 U.S. troops to Syria. Yet Trump also has stressed that the U.S. should get out of the business of nation building.

“And then the other problem […] The mantra is always ‘Stay, stay, we must stay forever,’ and if we leave, that’s our fault for leaving,” Paul said.

“There’s no exit from a situation like this” the senator said. “Let’s say we were to go in and defeat those who were there, to defeat ISIS — do you think that’s the end? No, when a big force comes, they’re going to shrink away, and they will fight ’til the end of time.”

“And they will fight against an American target if Americans are the target,” Paul said.

Watching the 2016 presidential primaries where most Republican candidates seemed eager to commit American troops abroad, with the exception of Paul and in some ways Trump, I wrote, “Our foreign policy is run by crazy people. I don’t mean legitimately insane, but politicians who insist America must do things around the world that have been empirically proven not to work — for decades — at great cost to our country’s finances, military, prestige and actual security.”

It remains true: We go out of our way to make other nation’s wars our own, usually to our own detriment.

Paul said Tuesday, “This is a war within Islam, and I think we should be supportive and try to amplify those who are trying to defeat this aberration.”

The Republican senator from Kentucky then ran down all of the other forces that could be part of anti-ISIS efforts in the region instead of the U.S. always having to take the lead. “Look, there are 200,000 Peshmerga. There are 200,000 Iraq soldiers. There’s a hundred and some odd thousand in the Syrian army. There are 600,000 in the Turks’,” Paul said, “and there are 15,000 ISIS, and we have to go over there to defeat them?”

Donald Trump won the election saying sane things about the futility of the Iraq war and the folly of nation building, combined with some less sane and belligerent things. But at a Senate Foreign Relations Committee hearing this week, we were reminded that among the nation’s entrenched foreign policy elite, nothing has really changed. They still possess the same interventionist mentality.

The only person on that committee who seemed to outraged over the idea of sending 1000 Americans men and women to Syria — particularly based on everything we have learned about ill-advised interventions from the Iraq war forward — was Sen. Paul.

“I think we ought to think this thing through and think that this won’t be the end, this will be the beginning,” Paul said. “And I guarantee you the voices are loud and strong. Everybody says we should have stayed in Iraq. Everybody is still saying we should stay in Afghanistan.”

“Are we going to stay everywhere? Forever?” Sen. Paul asked.