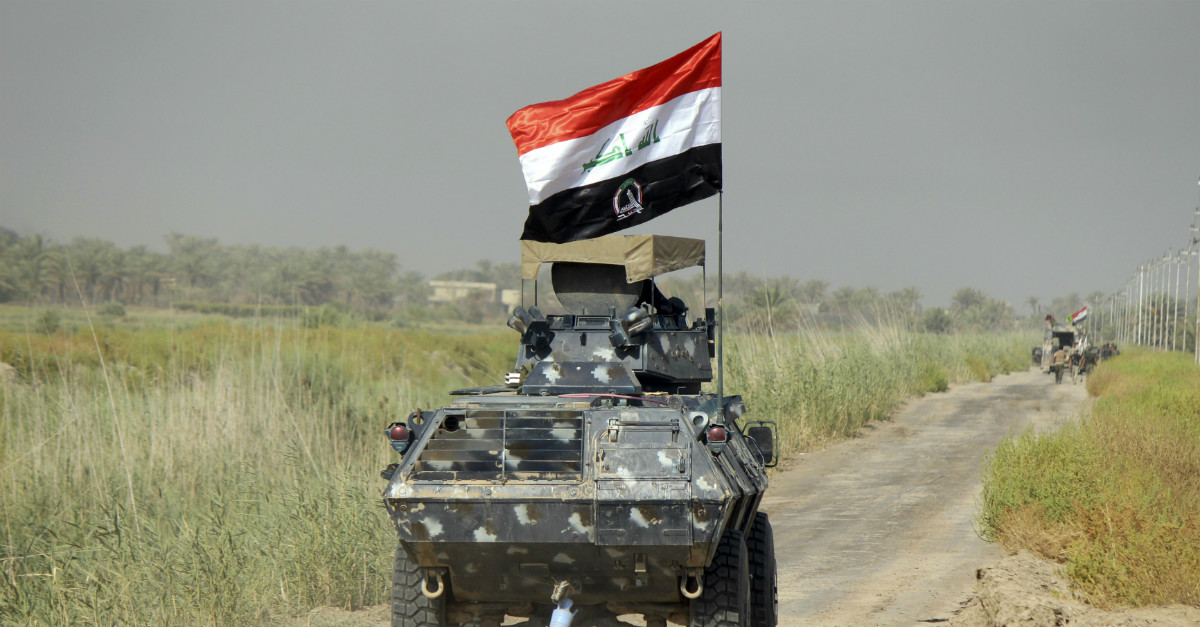 We never seem to get much time in Iraq. No sooner is one enemy dislodged than another takes hold, often more dangerous than the first, as the crushing pendulum of sectarianism hurtles back and forth between the Sunnis and the Shias. Now it’s about to swing again as Iraqi forces finish mopping up the last of the Islamic State in the city of Mosul. Amidst celebrations that ISIS, the deadliest Islamic terror syndicate in world history, is on the cusp of annihilation, another enemy is consolidating its power.

That reality was underscored last week by news little reported here in the West. Iranian-linked Shiite militias fighting the Islamic State, known as Popular Mobilization Units (PMUs), began sieging the town of Baaj only 40 kilometers inside Iraq from Syria. The PMUs have shrewdly focused on capturing key roads, which they’ve used to hem in Sunni communities and assert control over supply lines in northern and western Iraq. When they inevitably reach the border with Syria, they’ll be able to hook up with Shiite forces there and work with them to shore up Bashar al-Assad’s regime, Iran’s ally.

The result will be a swath of Iranian influence that extends westward through Iraq and the Syrian regime to Hezbollah in Lebanon. This is what’s often called the “Shiite Crescent,” a term coined by King Abdullah II of Jordan back in 2004 to describe the moon-shaped area that it constitutes, and fears of it are generally overblown. If anything, the Iranians are on defense in Syria, where the Assad regime has lost sway over much of the country, and the combined power of the Middle East’s Sunni nations still dwarfs anything exercised by the Shias. This is hardly an unchecked Iranian empire, as neoconservatives like to assert.

The real danger is that looming pendulum, particularly in western Iraq where the PMUs have established authoritarian control over many Sunni villages after “liberating” them from ISIS. Journalist Ramita Navai traveled to Iraq earlier this year to report for Frontline and discovered a sectarian simmer threatening to boil: Shiite gangs ruthlessly running villages, atrocities committed with abandon against Sunnis, kidnappings, mass murders, torture, Sunnis now fearing the PMUs more than the Islamic State. “After ISIS there will be a civil war,” one man warned Navai, “because blood has been spilled.”

That should sound like deja vu. Remember, the reason ISIS was able to rampage across Iraq in the first place was because it was welcomed by Sunnis weary of being abused by Shiite forces under the control of former prime minister Nouri al-Maliki. Now oppression has come to Sunni Iraq once again under the PMUs. Another violent Sunni counter-reaction seems inevitable, and then on we go.

The good news is that the PMUs are caught in the middle of a struggle for the future of Iraqi Shias. The three key figures to watch here are Maliki, back from ignominy and brandishing the PMUs that he helped create; Prime Minister Haider al-Abadi, who understands the PMUs are essential to defeating ISIS but wants to restrain them; and Moqtada al-Sadr, who’s reinvented himself as a populist with a focus on economic issues and wants to disband the PMUs entirely. Iraq is majority-Shia, but its general interpretation of Shiite Islam tends to be less extreme than Iran’s, meaning it’s possible that moderation may still prevail, either from Abadi’s good sense or Sadr’s outsider pressure. The PMUs themselves are also diverse?not all are committed to sectarian suppression.

In the meantime, this is exactly why we must resist pressure from Republican hawks to “stop overlearning the lessons of Iraq.” We cannot do that because the sectarian furies ravaging Iraq today are the same ones that were unleashed by George W. Bush’s war, and they hold warnings for the future of our foreign policy. Those who would spread this anarchy further by slamming down against the Assad regime in Syria or even bombing Iran itself should be forced to look upon the rotten fruits of their last intervention. Without Saddam Hussein, there isn’t yet a power that’s proven capable of putting Iraq back together?not the isolated and querulous parliament, not the struggling army, certainly not the United States.

Instead, there is only the pendulum, and it swings and swings.