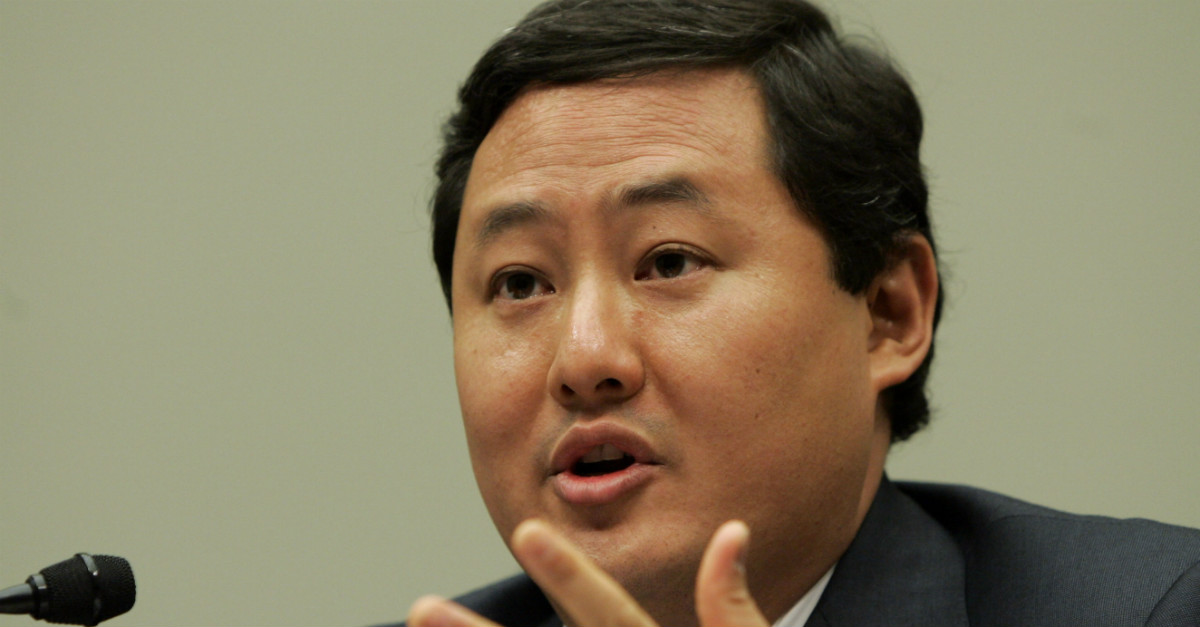 AP Photo/Susan Walsh
In this Thursday, June 26, 2008 photo, John Yoo, a law professor at the University of California at Berkeley, testifies on Capitol Hill in Washington. Former Justice Department lawyers Jay Bybee and John Yoo showed "poor judgment" but did not commit professional misconduct when they authorized CIA interrogators to use waterboarding and other harsh tactics at the height of the U.S. war on terrorism, an internal review released Friday, Feb. 19, 2010 found. (AP Photo/Susan Walsh, File)

When John Yoo, the former George W. Bush administration lawyer who singlehandedly legalized the use of torture on terrorism suspects, says that a president has gone too far, the time has come for that president to look himself in the mirror and wonder if he is being advised correctly by his attorneys.

Unfortunately for Donald Trump, he?s only three weeks into his administration, so firing a top official would look terrible. But still?.it?s John Yoo giving this advice. That really says something.

Writing in the New York Times yesterday in a piece titled ?Executive Power Run Amok,? Yoo makes the case that President Trump doesn?t seem to understand the separation of powers under the U.S. Constitution. According to Yoo, Trump is overlooking the fact that many of his policy proposals ? funding a wall along the U.S.-Mexican border and slapping a tariff on Mexico to pay for it ? would be unconstitutional if Congress refused to approve. Trump’s executive order on Muslim immigration could be justified on constitutional grounds, except that Rudy Giuliani already said that the order is designed to keep members of a specific religion out of the United States.

RELATED: This election is why libertarians are always harping on about executive power

But it?s this quote from Yoo that really takes the cake:

In his Inaugural Address, Mr. Trump did not acknowledge that his highest responsibility, as demanded by his oath of office, is to ?preserve, protect and defend the Constitution.? Instead, he declared his duty to represent the wishes of the people and end ?American carnage,? seemingly without any constitutional restraint.

Let?s talk about “constitutional restraint” for a moment. It’s a funny term coming from a man who wrote some of the most extreme legal documents ever produced by the Bush White House. Here?s a very brief primer:

The U.S. Supreme Court would eventually tear up these legal interpretations in two cases, one that allowed enemy combatants the right to common Article 3 protections and the other that provided detainees at Guantanamo the right to challenge their detentions. The Office of Legal Counsel, the same that Yoo worked for, later tossed most of his opinions in the garbage.

Over a decade after those opinions were written and used by the Bush White House as legal cover for an unprecedented expansion of executive power, John Yoo is now lecturing the current commander-in-chief to be careful about stepping over his constitutional boundaries. Perhaps if Yoo had distanced himself from his past stint in government, we could take him seriously. But to this day, he remains confident that his legal judgments were perfectly reasonable ? that waterboarding, stuffing human beings into small boxes for hours, slapping prisoners to get their attention, and hanging them from the ceiling, were interrogation tactics on the right side the law.

Instead of lecturing Trump, Yoo should keep quiet, stay in his Ivory Tower as a law professor, and stop insulting our intelligence.