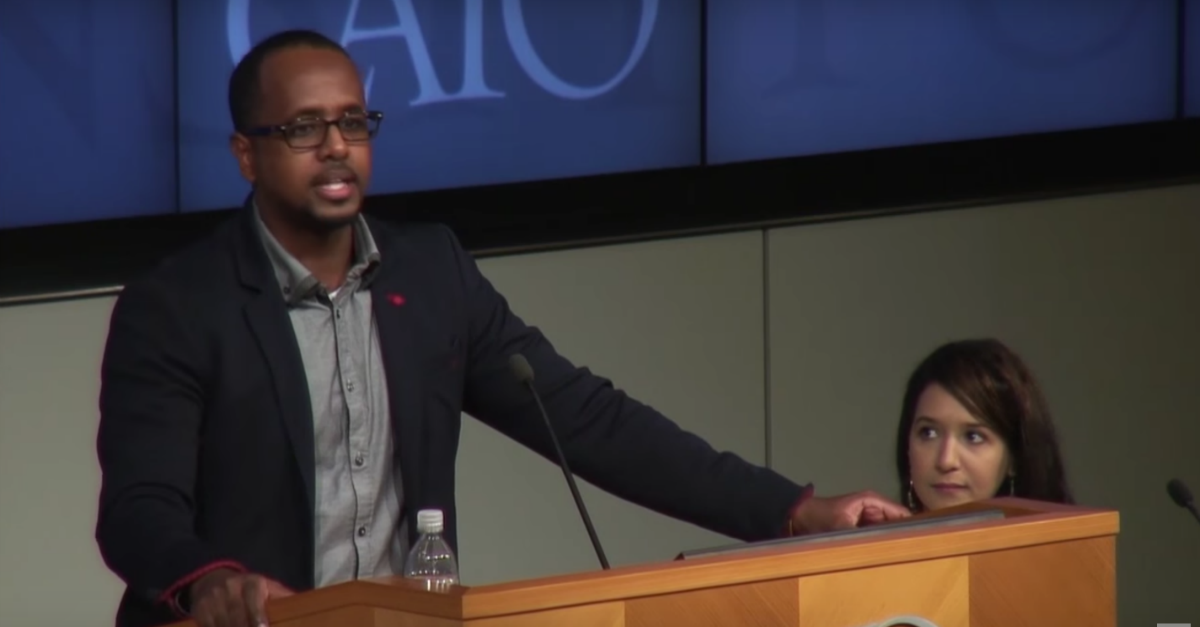 Amir Ahmad Nasr is a journalist and speaker whose work has been featured in The New York Times, The Wall Street Journal, The Atlantic, The Guardian, The Daily Beast, The Weekly Standard and Bloomberg, among other prominent publications.

In 2013 Nasr published the book “My Islam: How Fundamentalism Stole My Mind?and Doubt Freed My Soul.” Foreign Policy magazine listed it as one of the 25 books to read that year. It was exactly the kind of book anyone wanting to steer young Muslims away from extremism would want them to read.

His booked was banned throughout Malaysia, and Amir Nasr was forced to seek political asylum in Canada.

In February, Nasr was scheduled to speak at the International Students for Liberty Conference in Washington, D.C., an annual gathering of libertarian thinkers and activists, where he was to give talk on free speech.

But that was before Donald Trump issued an executive order restricting travel to the U.S. from seven countries, including Sudan ? a country Nasr is forbidden from entering.

?It?s been a rough time. Very shocking, to say the least,? Nasr told Rare in a phone interview from his home in Vancouver, Canada. ?I?m still processing it.?

?We need to protect the country, but not at the expense of core values,? he said.

?Those who here are illegally, we need to have that discussion,? Nasr said. ?But to go after people who are legal? It?s madness.?

Nasr also questioned why certain countries were not included in President Trump?s list. ?We can all kind of vetting and security measures, but if it had anything to do with security, what about Saudi Arabia? What about Pakistan??

Fifteen of the 19 9/11 hijackers came from Saudi Arabia. One of the San Bernardino, Calif., shooters who killed 14 people in 2015 was Pakistani. There have been no fatal attacks carried out by refugees in the U.S.

?I have so much love for the United States and so much concern for the U.S. Constitution,? Nasr said.

Supporters have started a petition for Nasr to allow him to speak at the D.C. libertarian conference in two weeks. Students for Liberty took a public stance against Trump?s executive order with their Director of North American Programs David Clement saying in a statement, ?Amir?s case demonstrates the utter ridiculousness of this ban. People like Amir flee oppression and seek the protection of Western democracies.?

?To deny these people entry, based on their place of birth, does nothing to enhance U.S. safety and makes good people suffer,? Clement said.

RELATED: Here?s the one thing Donald Trump could do to really make our immigration system safer

Nasr told Rare, ?America has flaws, but it has been that shining city on a hill.?

?When politicians say it?s a beacon of hope to the world, I believe in that.?

I asked Amir what he would say to Donald Trump. ?You speak the language of winning and losing, right?? Nasr replied. ?But when you come for our core values, there are no winners and everyone is a loser in some shape or form.?

?Don?t do this to the United States of America,? he added.