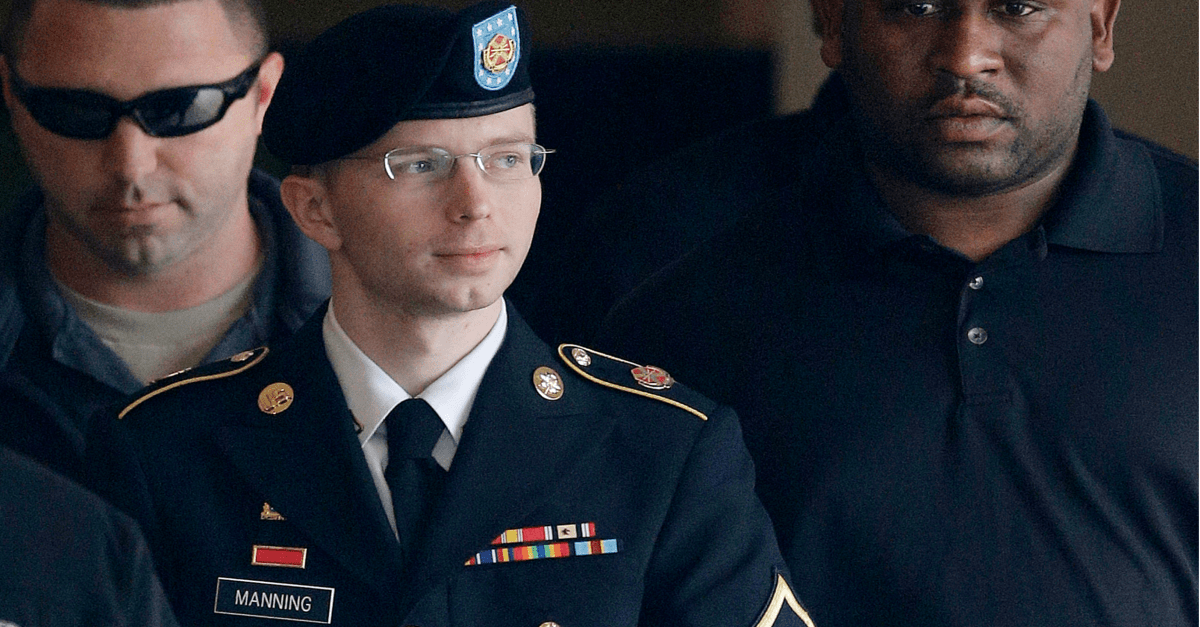 AP Photo/Patrick Semansky, File
FILE - In this Tuesday, Aug. 20, 2013, file photo, Army Pfc. Bradley Manning is escorted to a security vehicle outside a courthouse in Fort Meade, Md., after a hearing in his court martial. A northeast Kansas judge will make a final determination Wednesday, April 23, 2014, on Manning’s request to change her name from Bradley Edward Manning to Chelsea Elizabeth Manning. Manning is serving a 35-year sentence for giving reams of classified U.S. government information to the anti-secrecy website WikiLeaks. (AP Photo/Patrick Semansky, File)

After eight years of waging war on whistleblowers, and indeed, being president during former Army intelligence officer Chelsea Manning’s sentence, trial, and three years of brutal detainment before that—President Obama finally delivered some pleasant news on Tuesday. Instead of 35 years in prison for 20 charges, Manning will be out in May of this year.

A heroic whistleblower to some and a traitor to others, Manning was an Army private who leaked thousands of documents related to the Iraq and Afghan wars to WikiLeaks, which in turn shared some of those documents with various newspapers. Though U.S. officials and their most dutiful lapdogs cried out in outrage over this individualist act of light shedding, no one died because of these leaks, as some claimed. We did, however, get to see what war looks like live with the “collateral murder” video. Furthermore, Manning’s information gave us body counts for Iraq, reports of the U.S. failing to follow up on reports of torture and murder, and war crimes committed that were never prosecuted.

RELATED: President Obama commutes the sentence of one of America’s most notorious prisoners

There was all the reason in the world to assume Obama wouldn’t free Manning. His administration tried a record number of people under the espionage act. Edward Snowden fled to Russia rather than face the dubious justice that anyone unimportant would be granted for spilling government secrets. Former NSA executive Thomas Drake narrowly escaped the Espionage Act, and now works at an Apple Store, because he spoke to a reporter about privacy concerns he had with the agency, which he said was committing privacy violations worse than those which took place under Richard Nixon.

General David Petraeus could have been charged under a section of the Espionage Act for leaking classified secrets to his mistress/biographer, but he wasn’t. He pled guilty to a misdemeanor, and retired as CIA director, and that was all. Six months later, there was talk of him being in Donald Trump’s administration.

After two suicide attempts, miserable treatment, and draconian punishments for crimes such as possessing verboten books and expired toothpaste, and seven total years without freedom, Manning has five more months to go. It appears that President Trump will have no power to reverse this decision. Presidential clemency power is a beefy power indeed.

Obama, after a term and a half of being known for a dubious healthcare law, and setting exciting new precedents in drone assassinations of Americans, finally started using that power in earnest, and is now breaking records there. As of today’s news, the president had commuted the sentences of more than 1500 people, and pardoned 212 people.

Though the news of Manning’s imminent release is great, there can be at least a semi-cynical explanation. Having diluted his civil libertarian rhetoric with his, uh, actual record, Obama can now go out with a bang, one that makes even the crankiest small government fans cheer when they consider the 1500 people whose lives are improved (or in the case of the handful of people who sentences Obama changed from death to life imprisonment, saved). But he can also keep an elite credibility by saying Manning was punished already. The clemency was a surprise, but there’s a certain savvy logic to it as well.

It’s not enough for security state vampires such as National Review’s David French, who found 35 years in prison for Manning to be an unsatisfying compromise, and seven measly years and torturous solitary confinement to be an insult. French and his ilk, such as former UN Ambassador John Bolton (and the Trump of 2010), thought Manning deserved death. She could have received the death penalty if she had been charged with treason, or if she hadn’t been acquitted of the charge of aiding the enemy. Manning’s sentencing must have been a sad day for people who demand their pound of flesh, and who think that 35 years behind bars is small.

But the former could develop some proportionality and realized that seven years is a lot of life to lose. Manning was punished for trying to show the world what war looks like beyond George W. Bush and a “mission accomplished” banner, or even sanitized photos of flag-draped coffins. By freeing her, Obama gets to get back some of his civil libertarian cred, but also isn’t doing something “crazy” like pardoning Snowden. In a country that loves to punish too much (2.3 million people in prison), Obama ending his presidency with a cascade of mercy is a good thing, no matter what you think of the people whose sentences he has commuted, or the people he has freed. But it’s a shame that he didn’t have the courage to push for these things earlier. Or that he didn’t feel like risking some of the political capital that he spent on drones, Libya, and ObamaCare.

Petraeus was showing off to his mistress. Hell, Dick Cheney has been enjoying his freedom for many years now. Henry Kissinger has a Nobel Peace prize, no matter how many Cambodians he helped to melt.

They will go to war for us, and in our name. But God help anyone who wants to help the public get a picture of what those wars really resemble. No matter what Obama’s motivation was, sincere or otherwise, his freeing of Manning is a pleasant surprise, and a capper to a rocky, often-authoritarian presidency that Trump is about to inherit.