Otto Warmbier was not a “frat bro” undeserving of sympathy, he was the helpless victim of a murderous regime 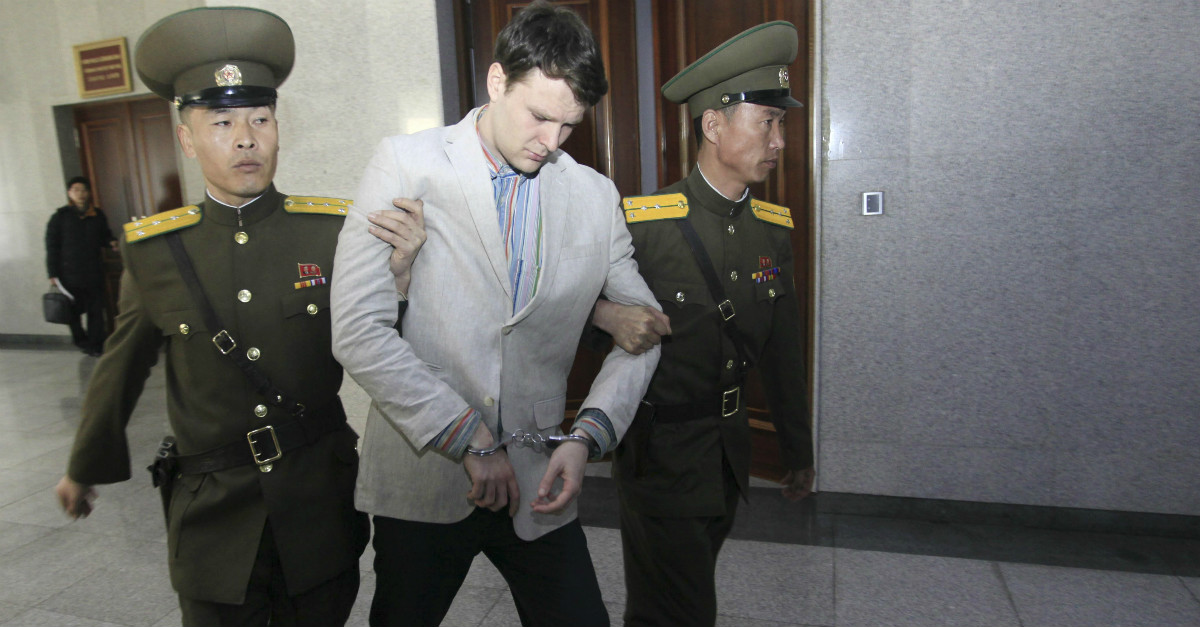 AP Photo/Jon Chol Jin
American student Otto Warmbier is escorted at the Supreme Court Wednesday, March 16, 2016, in Pyongyang, North Korea. North Korea's highest court sentenced Warmbier, a 21-year-old University of Virginia undergraduate student, from Wyoming, Ohio, to 15 years in prison with hard labor on Wednesday for subversion. He allegedly attempted to steal a propaganda banner from a restricted area of his hotel at the request of an acquaintance who wanted to hang it in her church. (AP Photo/Jon Chol Jin)

During my semester abroad in Spain, I visited the Royal Palace of Madrid. As my fellow American students and I wandered through the ornate rooms, we found ourselves alone in a throne room. The guard had stepped out, and only a low rope barrier stood between the throne and me.

For a few seconds, I was transfixed by temptation. A quick step over the rope, a brief touching of rump to seat, and I would be the King of Spain, endowed with all the wealth of South America, the spiritual authority of the Inquisition and a massive armada ready to crush Queen Elizabeth.

Just as I was about to go for it, the guard returned, and I moved to the next room. If I had been caught on the throne, however, I’d have been yelled at and probably kicked out of the palace.

RELATED: Otto Warmbier, the American student who was just released from North Korea, has died

I would not have been arrested, sentenced to 15 years of hard labor, mistreated, and then sent back to the United States in a coma after a year and a half only to die a few days later, which is exactly what North Korea did to American university student Otto Warmbier.

Warmbier was on his way to Hong Kong as part of a 2016 study abroad program when he was caught trying to steal a propaganda poster from a North Korean hotel.

Watching videos of his trial, I was almost reduced to tears. Warmbier frequently looks into the cameras, his face hollow with despair. He understands that one stupid mistake has ruined his life.

Larry Wilmore, who hosted “The Nightly Show” on Comedy Central until audiences got sick of being called racists for half an hour every night, saw the same videos I did, but dismissed Warmbier as a privileged “frat bro” and his grief as “crocodile tears.” His audience, reaching new heights of depravity, laughed at clips of Warmbier sobbing and begging for forgiveness at his trial.

Wilmore, in his haste to make the Warmbier’s plight about “frat bro privilege,” entirely missed the point.

He came close to understanding the story when he pointed out that a Nightly Show audience member had stolen a cardboard cutout of Wilmore himself from the building’s lobby a week earlier. Wilmore included security camera footage of the man walking out of the lobby, carrying it down the street, and bringing it onto the subway, all with no consequences.

If Warmbier had been Brock Turner, accused of rape in an American court, then mocking his tears over his ruined future would have been appropriate, but in this case the punishment far exceeds the crime. Stealing is wrong and illegal, obviously, but stealing a worthless piece of paper or cardboard useful only for kitschy dorm décor and bragging rights should be met with a slap on the wrist at most. And I can imagine the bragging rights. If Warmbier had made it home with the poster, he’d have been a legend. Everyone he showed the poster to would have remembered and retold the story for decades, long after they’d forgotten Warmbier’s name. Only a few seconds of daring stood between him and immortality, but instead, he found death.

Wilmore also pointed out that Warmbier may have attempted to steal the poster as part of his initiation into a secretive group at the University of Virginia. If so, Wilmore should have sympathized even more.

How many black youths in America are drawn into crime and drugs by peer pressure, and how many of them have their lives ruined for minor offenses by a justice system that may imprison as many or more people per capita than North Korea’s? I doubt Wilmore would have mocked the tears of a young black man who was incarcerated under mandatory minimum sentencing laws. Saying Warmbier deserved hard labor and death for trying to steal a poster is like saying Walter Scott deserved to be shot for having a brake light out.

As Ayn Rand wrote, “The only power any government has is the power to crack down on criminals. Well, when there aren’t enough criminals, one makes them.” These cases, and others like them, are not about keeping people safe, but about the state reminding the people that on a mere whim it can deprive us of our liberty, our property and even our lives.

The state, not the victim, is to blame.

You can help those who have suffered under North Korea’s regime by donating here.