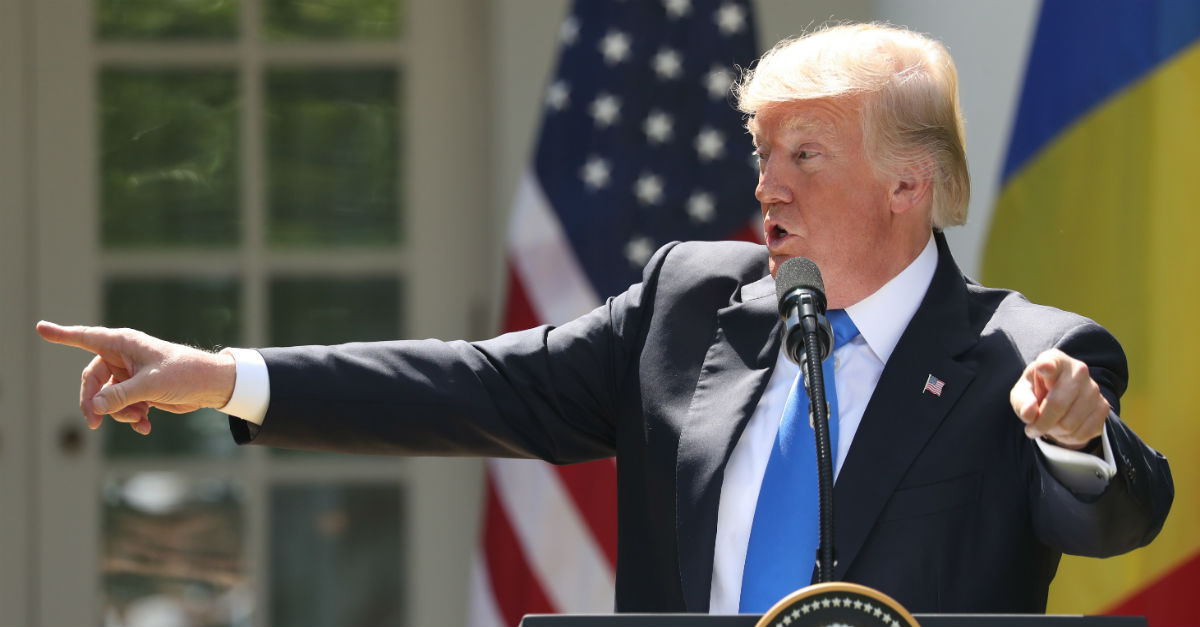 On Friday, just more than 24 hours after former FBI Director James Comey testified before the Senate Intelligence Committee, President Donald Trump appeared outside the White House to address reporters. There were a number of questions for Trump who stayed silent throughout Thursday as James Comey testified and even called the president a liar on a number of occasions.

The president returned to Twitter on Friday, saying that he was “completely vindicated” by Comey’s testimony and calling the former head of the FBI a “leaker.” During his hearing, Comey stated that he gave his memos to a friend with instructions to release them to the press.

Despite so many false statements and lies, total and complete vindication…and WOW, Comey is a leaker!

Trump appeared with Romanian President Klaus Iohannis, who he met with on Friday after his appearance at the U.S. Department of Transportation. The president began by thanking the president of Romania and said that “today we are making the important ties [between Romania and the United States] even stronger.”

Trump on possible existence of Comey tapes: "Well, I'll tell you about that maybe sometime in the near future." pic.twitter.com/NFBjV1txzQ

Trump’s first question went to Dave Boyer of the Washington Times. The reporter hit the press conference off with a bang asking about the tweet that Trump sent out on Friday morning, specifically if there are tapes of conversations with Comey. Trump laughed and quipped “I’ll tell you about that maybe sometime in the very near future;” seeming to suggest that there may be tapes of his conversations. The president also said, “Yesterday, James Comey confirmed a lot of what I said.”

Later in the press conference Trump returned to his “fake news” bashing, joking with President Iohannis “should I take a question from one of the ‘killer networks,’ who treat me so badly as fake news?” Moments later, he called on Jonathan Karl of ABC News, saying “do you remember how nice you were to me before I started running?”

RELATED: President Trump stepped away from the mic in the middle of a speech to show off his big infrastructure plans

When Karl asked about the tapes, Trump repeated his line that he’ll talk “more about that in the very near future,” noting, “you will be very disappointed when you hear the answer.”

Asked if he'd be willing to testify under oath to Robert Mueller, Trump says: "100 percent" pic.twitter.com/ejgcl8SBiQ

When Karl asked about the so-called “loyalty pledge” that Comey referred to, Trump denied that it ever occurred, saying “I hardly know the man, what kind of person would do that?” When pressed, Trump said he would be willing to testify under oath “100%” but after answering the ABC question, Trump thanked the press corps and ended the conference, returning to the White House.