Venezuela’s crackdown on protesters reminds us that liberty is precious 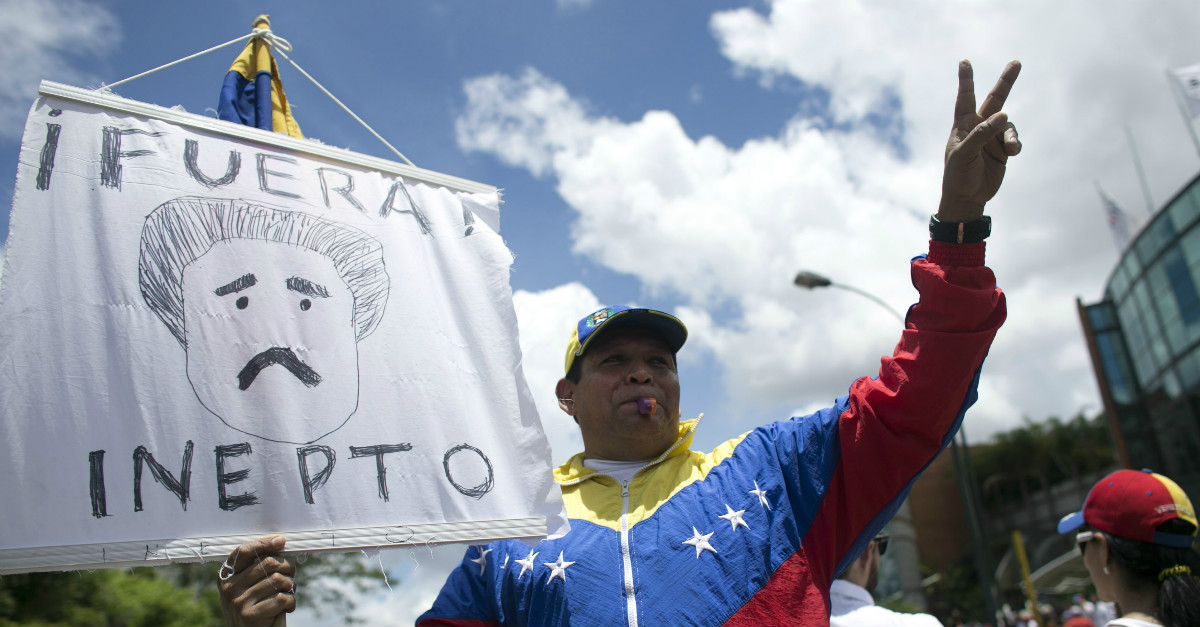 AP Photo/Ariana Cubillos
A protester holds a sign with a drawing depicting Venezuela's President Nicolas Maduro and a message that reads in Spanish; "Get out klutz" during a march in Caracas, Venezuela, Thursday, Sept. 1, 2016. Venezuela's opposition is vowing to keep up pressure on President Nicolas Maduro after flooding the streets of Caracas with demonstrators Thursday in its biggest show of force in years. Protesters filled dozens of city blocks in what was dubbed the "taking of Caracas" to pressure electoral authorities to allow a recall referendum against Maduro this year. (AP Photo/Ariana Cubillos)

Hundreds of thousands of Venezuelans took to the streets of Caracas yesterday calling for a recall referendum on President Nicolás Maduro. Opposition leaders claim that Maduro’s notoriously socialist government is stalling the democratic process amid hyperinflation, food shortages and widespread crime.

Headlines revealing what is happening in Venezuela are easy to forget since there are plenty of corrupt governments in the world and protests happen all the time. However, this one is particularly personal for many of us in the United States liberty movement.

RELATED: The DOJ was right to phase out private prisons, but there?s much more work to be done

Students For Liberty has the story: (emphasis added)

All of us at Students For Liberty were heartbroken to hear the news today that Venezuelan activist and long-time friend of SFL, Yon Goicoechea, was yesterday kidnapped by agents of the Venezuelan government. Yon has been a stalwart of the Latin American liberty movement for many years, and is one of the most outspoken advocates for freedom in Venezuela today.

The Cato Institute?s Ian Vasquez reports that the Venezuelan regime ??publicly announced that the government had arrested Yon on the bogus claim that he was carrying explosives.? The post goes on to explain that: ?In the video broadcast on national television, [Diosdado] Cabello referred to the $500,000 Friedman Prize award that Yon received as evidence that Yon was some sort of foreign-employed agent bent on terrorism.? These bare-faced falsehoods are to be expected from a corrupt and failing regime, but we must not let them stand unchallenged.

Being a libertarian in the United States is easy. Despite our government’s many flaws, at the very least, our Constitution enshrines basic free speech protections for opinions that dissent from the statist quo. It’s easy to forget how downright evil the state can be. Activists in many other countries face prison or even death for the “crime” of speaking their minds.

Let’s hope that the voice of the people triumphs over the force of the state. Liberty is not a radical idea. It is a basic human right that every individual everywhere is entitled to.

RELATED: By doing the exact opposite of Venezuela, this South American country is flourishing

With that, I cannot think of more appropriate words to end this post than those of Yon himself. After his arrest this week, The Wall Street Journal published a paragraph from a 2008 newsletter that he wrote for the Cato Institute:

Much like the student movement itself, a new Venezuela is emerging. A new Venezuela that believes that the only way forward is through liberty. Liberty unleashes the human capacity to innovate. It unleashes human creativity. The poverty that plagues Latin America cannot be solved by a dictator. It cannot be solved by a messiah. It cannot be solved by the state. The only way to get rid of this scourge and move forward is for millions of people to work and fight for their families without the interference of the state. We will not reach our goal in a month or a year, so we have to prepare ourselves for a long struggle. The true revolution in Venezuela will have happened the day we have strong and liberal institutions that defend the rights of every Venezuelan.