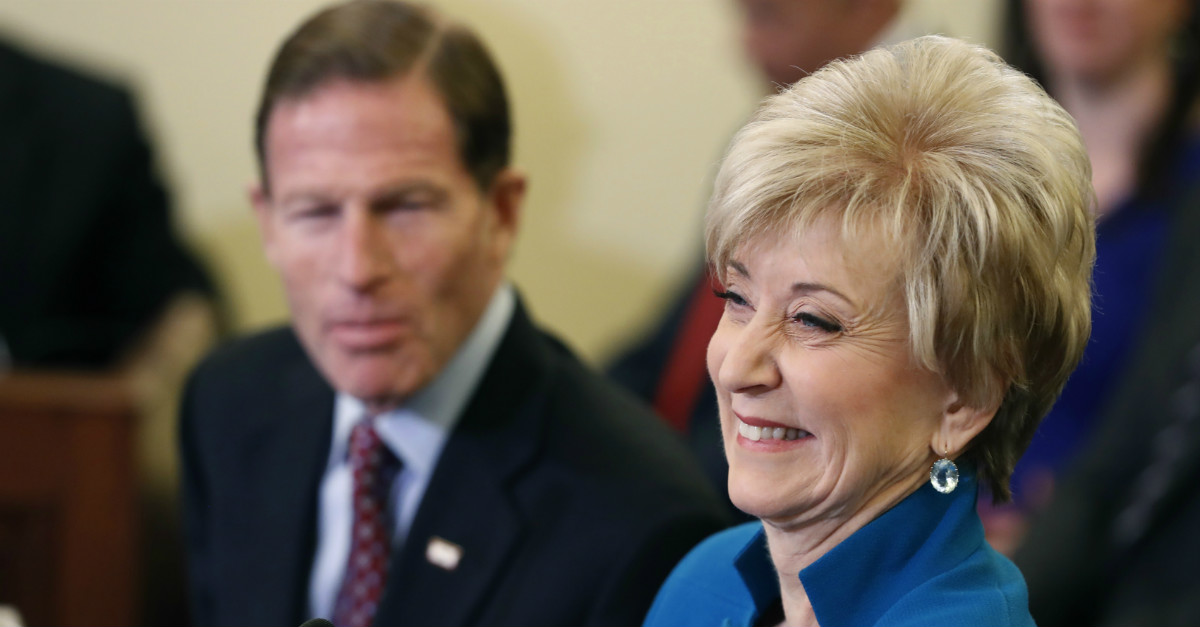 President Donald Trump’s choice of World Wrestling Entertainment co-founder Linda McMahon to head the Small Business Administration was an out of the box pick to say the least. McMahon, who has also run for the U.S. Senate twice in Connecticut, oversaw a business empire that is best known for its premiere annual event, Wrestlemania and has become a pop cultural icon to middle America. President Trump is the first U.S. president to appear in a WWE pay-per-view event and was even on the receiving end of a “Stone Cold Stunner” at Wrestlemania 23 in 2007.

The McMahon appointment makes sense because as much as some might like to sneer at the WWE, it is an American success story. Linda McMahon, along with her husband Vince, took a regional wrestling promotion and transformed into a global empire. Back when the then-World Wrestling Federation was founded in 1979, there were 30 different regional wrestling promotions who respected each other’s territory that were under the control of the National Wrestling Alliance.

The WWF withdrew from the NWA in 1983 and then worked to get their wrestling programs on syndicated TV across the United States. Eventually, the McMahons took advantage of the rise of cable TV and created the first wrestling pay-per-view event, Wrestlemania, to grow the WWF brand. The WWF also brought pro wrestling back to national network television for the first time since the 1950s and generated new streams of revenue through advertising and tape sales. In 2002 after a naming dispute with the World Wildlife Fund, the World Wrestling Federation changed its name to World Wrestling Entertainment.

Today, the WWE employs over 800 people and is listed on the New York Stock Exchange. It has become a worldwide brand generating over $658 million in revenue in 2015. Pro wrestling has become mainstream in American culture thanks to the efforts of the WWE.

Not only is Linda McMahon an American success story, but she has been a long-time supporter of helping other small businesses succeed. In December, Forbes Magazine ran a profile of McMahon’s work with small business owners, especially women owners, and her role in helping them.

McMahon seems to be most engaged in supporting women entrepreneurs. After her second run for the Senate, she helped organize Women’s Leadership Live, which fosters a network of women business leaders and presents annual conferences that combine inspiration with practical advice… McMahon is interested in helping the broadest range of women entrepreneurs…

Fran Pastore agrees. Pastore founded the Women’s Business Development Council in 1997, the first organization in Connecticut to take part in the S.B.A.’s initiative to organize and fund business counseling centers specifically for women. The Women’s Business Development Council has four offices across the state, and last year coached 700 clients — 38 percent of them of color and 44 percent low- or moderate-income. Pastore met McMahon at a fundraiser six years ago, between the campaigns. “I saw her standing there, she was by herself, so I went over to her, and told her I wanted to get her engaged in our organization,” Pastore recalls. “And she said, ‘I’d love to, here’s my card, call me.’

If Trump wanted someone that small business owners could embrace — because many already have — there are few candidates better than Linda McMahon.