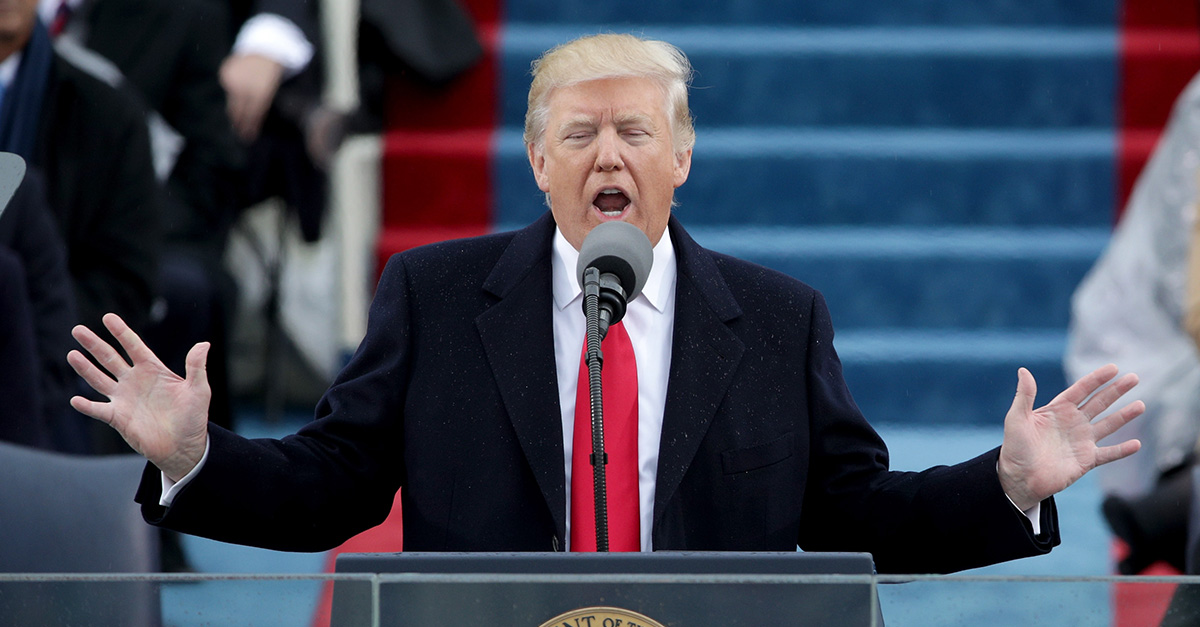 After a contentious election season, President Donald Trump gave an inaugural address dominated by a theme of nationalist unity. ?A new national pride will stir our souls, lift our sights, and heal our divisions,? he said, continuing:

It?s time to remember that old wisdom our soldiers will never forget, that whether we are black or brown or white, we all bleed the same red blood of patriots. We all enjoy the same glorious freedoms and we all salute the same great American flag.

And whether a child is born in the urban sprawl of Detroit or the wind-swept plains of Nebraska, they look up at the same night sky, they fill their heart with the same dreams, and they are infused with the breath of life by the same almighty creator.

Though I am willing to ascribe to Trump good intentions?and to allow for the expected dose of inaugural unrealism?the rhetoric here is too soaring and myopic all at once. In those failings, it encapsulates the deep and, to my mind, insurmountable differences between Trump?s nationalism and libertarianism broadly understood.

First, Trump?s words are too comprehensive: In practice, it is not the case that all Americans enjoy the same freedoms and share the same dreams.

If the last three years of national conversation about criminal justice reform have demonstrated anything, it is that poor and minority Americans cannot expect the same protections from the law as their richer and whiter counterparts. The evidence is overwhelming that black people in particular have good reason to feel that they are not safe in America, that they must guard their children against police brutality, that their lives are not equally valued by our legal system.

And as for dreams, decades of government-enforced segregation and discrimination have left those same communities at an even further disadvantage. ?It was not a vague white society that created ghettos but government,? explains Richard Rothstein of the left-of-center Economic Policy Institute, a government ?that employed explicitly racial laws, policies, and regulations to ensure that black Americans would live impoverished, and separately from whites.?

With that history in mind, it is hardly credible that a child ?born in the urban sprawl of Detroit? has the same dreams as one in ?the wind-swept plains of Nebraska.? The child of Detroit Trump?s speech envisions is born amid a mess of historically institutionalized racism he must first overcome.

Our new president likes to alternate between ignoring these disparities, as in his inaugural address, or using them as crude props for his own political gain, as when he declared on the campaign trail that black communities are ?absolutely in the worst shape that they’ve ever been in before? and African-Americans have ?nothing to lose? in giving him their votes.

Though these remarks may have been meant as sympathy, they were met with understandable indignation thanks to their combination of historical ignorance?are modern inner cities really worse than the brutality of slavery or Jim Crow??and apparent disinterest in the complaints black Americans themselves express about their government today. Comments like that and the too-broad rhetoric of the inaugural address contribute to charges that Trump?s nationalism is white nationalism.

The second failing in Trump?s speech is, paradoxically, that its moral imagination is too small. ?So small,? notes Conor Friedersdorf, ?that it doesn?t seem to have occurred to him that Syrian refugees bleed the same red blood that fills the veins of American patriots, that illegal immigrants about to cross the border with Mexico look up at the same night sky, that Chinese factory workers are infused with the breath of life by the same Almighty Creator.?

If the points of humanity Trump lists are our basis for unity, there is no room for the nationalism he describes. If our value as people comes from our Creator?and I believe it does?then it applies equally no matter where we happen to be born in relation to human-drawn national borders. If, as Friedersdorf concludes, Trump?s address lists ?sound reasons for lifting our sights and healing our divisions, then Trump?s inward-looking, zero sum approach to the world is all wrong.?

It is also inimical to libertarianism. As expressed here, anyway, Trump?s perspective is anti-Washington and anti-globalist, but it is not anti-government and it is certainly not pro-liberty. There may be a more positive form of nationalism or a nationalism with liberty-friendly results, but it is not Trump?s. His dismissal of government-sponsored injustices past and present and his insistence that national identity is our most important attribute together make it impossible for Trump to honor libertarianism?s most central, primary commitment to the worth, rights, and liberty of the individual.