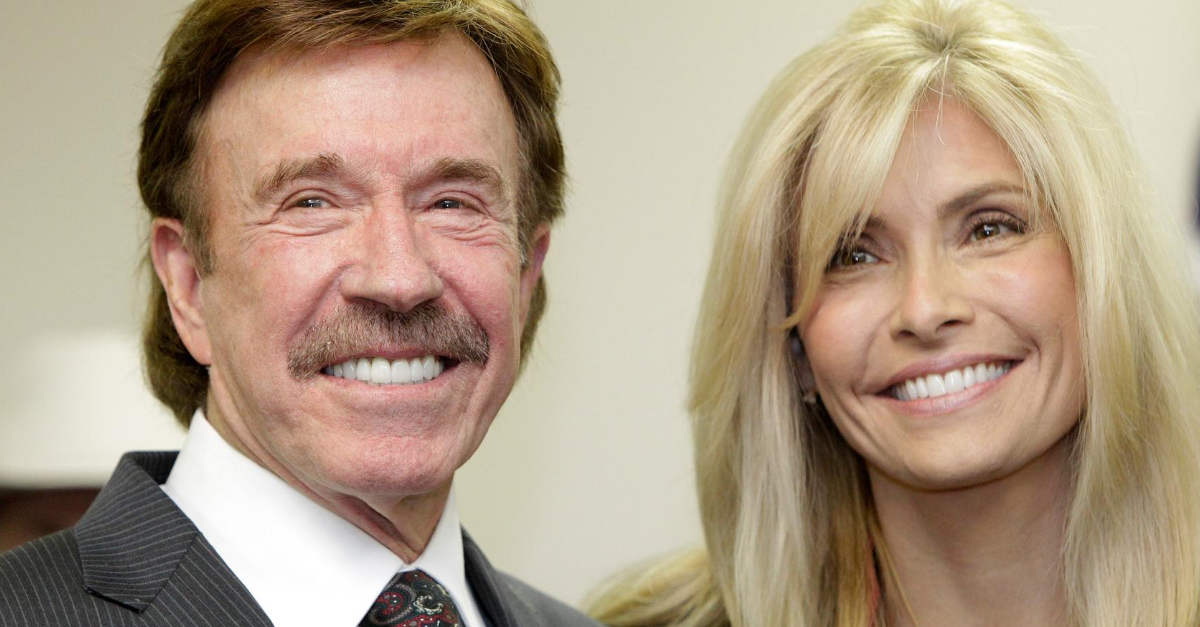 Chuck Norris is known for playing Walker, Texas Ranger for years. His real name is Carlos Ray “Chuck” Norris, which is a fact unknown to most. Not only is he an actor and martial artist, but he’s also a producer and screenwriter. He served in the United States Airforce and has won martial arts championships — he is a black belt, after all! He’s acted alongside Bruce Lee and worked with Steve McQueen! Oh, and he hails from Oklahoma, not Texas.

Chuck Norris’s wife, Gena O’Kelley, is not an actress, but she still has made a name for herself in Hollywood. She was a model, born in 1963 to Annette M. O’Kelley and Alan Gordon O’Kelley and found modeling work walking in runway shows. She did have a few television appearances on Hannity and Yes, Dear. She and husband Norris have worked on many projects over the years.

The two met in Dallas, Texas, while Norris was actually on a date with someone else. The two have quite a big age difference between them — a whopping twenty-three years. But the two quickly fell for each other and married in November 1998. This wasn’t the Walker, Texas Ranger’s first marriage. The first was to Dianne Holechek. They were married for 30 years and had two sons.

Chuck Norris’ first son from his marriage before Gena O’Kelley with Dianne is Mike Norris. Mike is an actor like his father, having been in 30 films. He also directs. Two of his directorial efforts, in which he also starred, are Armerigeddon and I Am Gabriel. Mike and his wife Valerie own their entertainment group, Wnd Fiddle Entertainment Film Studio. They have three children.

When Norris had an affair with a woman named Joanna, his daughter Dina was born. Like many men who have children from an affair, he didn’t know that he’d had a daughter. Conflicting claims from both parties say that she knew him when she was 26 years old (his side of the story) and when she was 16 years old (her side of the story). So, only God knows what’s right here. But, they did eventually meet, in just enough time for her son, Dante DioCiolli, to become a model.

Son number two to Dianne Holechek and the martial artist was Eric. He became a Hollywood stuntman and later a stunt coordinator, and he is now a director. He is also a father of 4. His kids are Camryn, Chloe, Chantz, and Cash.

The twins were born to present wife, Gena. Dakota Alan is an act like his father. He was in Yes Dear with his sister, mother, and father. Danielle was in Yes Dear, as well. She also starred in the Walker, Texas Ranger: Trial By Fire. She played Walker’s daughter.