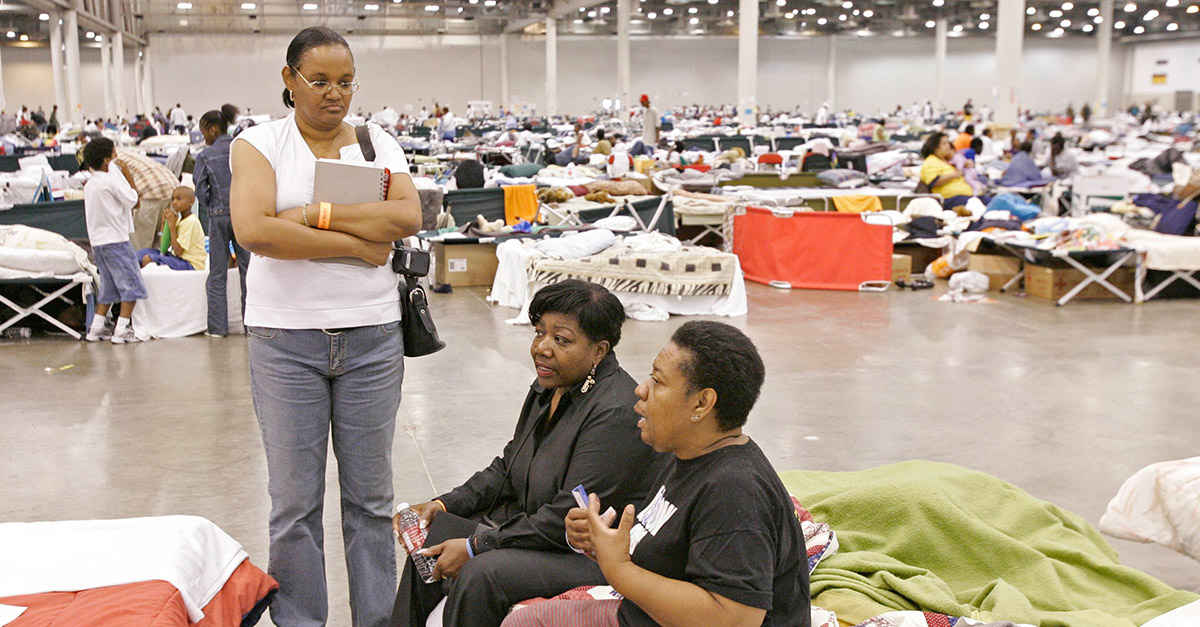 Photo by Craig Hartley/Getty Images
HOUSTON - SEPTEMBER 9: (L-R) Cynthia Wiggins of the New Orleans Housing Authority and Mass state rep. Gloria Fox talk with Dorothy P. Franklin about her evacuation from the Superdome as they visit evacuees from New Orleans at Reliant Center on September 9, 2005 in Houston, Texas. (Photo by Craig Hartley/Getty Images)

As Texas enters the fifth day of inundation by Harvey, thousands of people across the state have been evacuated to shelters.

According to officials, around 30,000 people may be forced to leave their homes, and with so many people looking for a place to stay any and every building that can be converted into a shelter probably has people staying in it. Depending on the severity of flood damage to their homes, people may be there for weeks into the future. Possibly even months, according to the Washington Post.

RELATED: Houstonians Flooding to Social Media for Assistance During Harvey

Shelter sites range from churches and gyms to massive buildings like the George R. Brown Convention Center. Even furniture stores have been converted into makeshift shelters for the displaced. As of Monday, over 3,000 people were already at the convention center, with more arriving.

Organizations like the Red Cross as well as civilian volunteers have stepped up to help hand out food and make sure people find space at shelters. People there pass the time watching the news and thinking about when they’ll be able to get back home. The Post article detailed people in Batman costumes at one shelter trying to bring a bit of happiness to the people there.

Some smaller shelters grew overcrowded and undersupplied because so many people had to be rescued. As floodwaters receded in some areas on Monday, some struck out on their own. Donations continue to come in to bridge the gaps as people remain stranded by the storm.