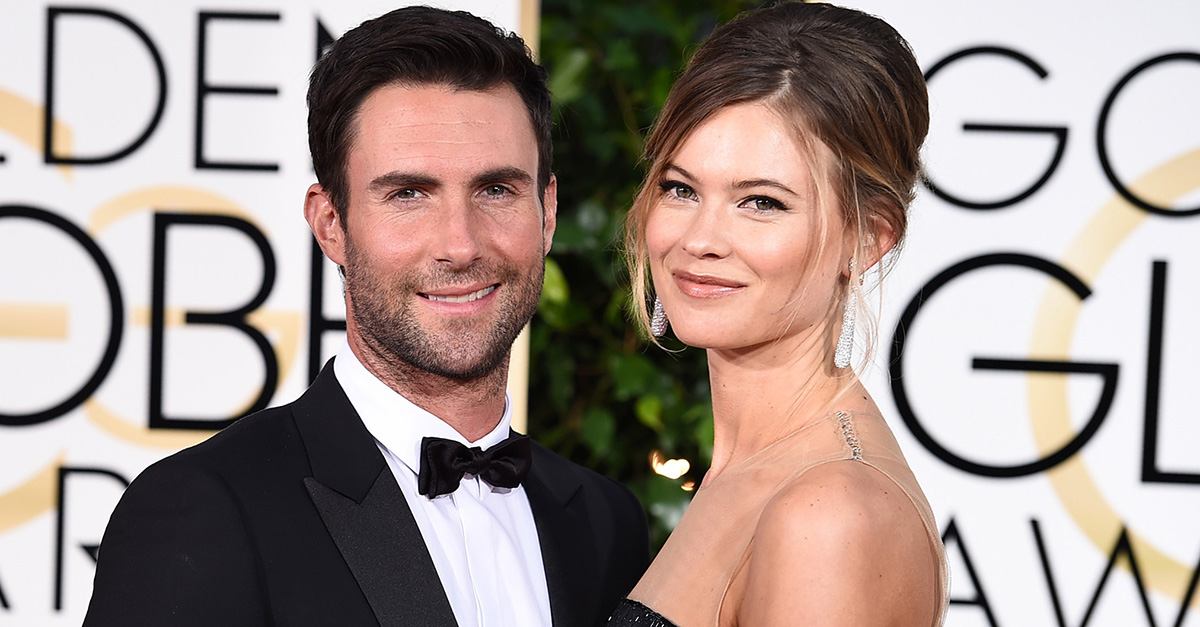 Photo by Jordan Strauss/Invision/AP, File
FILE - In this Jan. 11, 2015 file photo, Adam Levine, left, and Behati Prinsloo arrive at the 72nd annual Golden Globe Awards in Beverly Hills, Calif. A spokeswoman for "The Voice" coach says Levine and the Victoria's Secret model welcomed a daughter named Dusty Rose Levine. No other details were provided. The frontman for the band Maroon 5 and Prinsloo have been married since 2014. (Photo by Jordan Strauss/Invision/AP, File)

It’s another girl for “The Voice” coach Adam Levine and wife Behati Prinsloo!!

Levine stopped by “The Ellen DeGeneres Show” Tuesday and dished about Prinsloo’s pregnancy. Levine gushed about his model wife, calling her a “champion” and saying that he can barely tell she’s seven months pregnant already!

“No! She does not look like she is,” DeGeneres agreed as photos of a bikini-clad Prinsloo appeared. “Look at that. Seven months pregnant. That’s what I look like now.”

The proud papa gushed about his daughter, Dusty Rose (who DeGeneres named, btw), saying that the little one is so calm despite her parents being “maniacs.” But, the pressure is on for DeGeneres, as Levine said he now expects her to come up with a name for his next child.

“Do you know if it’s a boy or a girl?” DeGeneres asked.

“It’s a girl. We are having another girl,” Levine confirmed as the audience cheered. As for the name, Levine said, “We’re already working on it. It’s going. It’s happening.”

“It would be really great!” DeGeneres said.

Levine revealed that he and Prinsloo have big plans to expand their family over the years.

Levine and Prinsloo welcomed daughter Dusty Rose on September 21, 2016. Almost immediately after bringing their first child into the world, the couple gushed about the possibility of adding more babies to their brood.

“Behati and Adam are home with Dusty and they are completely attached to her,? a source told E! News last September. ?Family and close friends come over to see Dusty. Behati loves being a mom and can?t wait to eventually expand the family more.?

In September of this year, the couple announced they are expecting baby number 2. Prinsloo shared a bikini selfie on Instagram with her full bump on display.

“ROUND 2…” she captioned the shot.

The couple tied the knot in a 2014 San Jose del Cabo, Mexico ceremony.