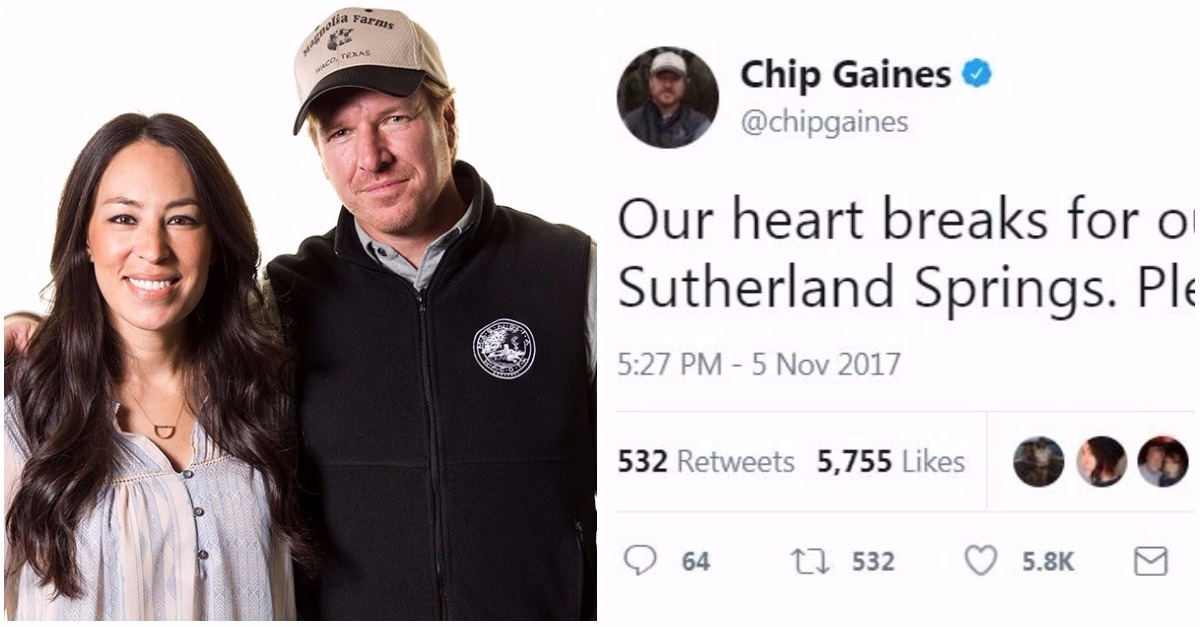 Chip Gaines had a heavy heart on Sunday night following the news of the mass shooting at a Sutherland Springs, Texas, church that left 27 dead — including the shooter — and another estimated 20 wounded.

Gaines, who lives in Waco, Texas, about three hours from Sutherland Springs, tweeted his condolences to the victims and the families late Sunday night.

“Our heart breaks for our neighbors down in Sutherland Springs. Please #prayForTexas,” he wrote.

Our heart breaks for our neighbors down in Sutherland Springs. Please #prayForTexas

RELATED: The first victim of the church shooting in Texas has been identified

Gaines wasn’t the only celebrity to post tributes to the victims. He was joined by several other big names in Hollywood, including Britney Spears, first daughter Ivanka Trump, Ellen DeGeneres and “Bachelor” alum Sean Lowe, also shared their heartbreak on social media following the news.

God bless the people of Sutherland Springs, TX. Our country’s hearts are breaking for the victims & their families. We love & are with you!

The world can feel hopeless, but it’s not. We have each other. We have the power to act, for Texas, for Las Vegas, for Orlando. For us all.

My heart breaks for the lives lost in the Texas shooting today. Praying for their families and everyone affected by another senseless act.

Our hearts break for our brothers and sisters in Christ in Sutherland Springs, Texas. We are praying for you.

I am absolutely devastated to hear the horrific news about my home state. I truly feel sick. My whole heart is with you, Texas.

Our hearts are with #Texas

My heart breaks…thoughts and prayers go out to those hurting and suffering. Mass shooting in Texas… love now! Life is short!

I am absolutely heartbroken over the shooting today in #SutherlandSprings Texas. 💔 #PrayForTexas #EnoughIsEnough #StopGunViolence pic.twitter.com/g42789PiBq

My heart hurts for the people of Sutherland Springs, Texas. This has to stop.

My heart hurts for all those affected by the tragedy in Sutherland Springs. Sending my love from your brother in Christ.

When will this madness end? How many more innocent people must die?

Some stars took the political route when they shared their outrage on social media. Chelsea Handler, Billy Eichner and “Silicon Valley” star  Kumail Nanjiani called for gun control in their tweets Sunday night.

Handler came under fire after she placed blame on Republicans, writing, “Innocent people go to church on Sunday to honor their God, and while doing so, get shot and killed. What country? America. Why? Republicans.”

Innocent people go to church on Sunday to honor their God, and while doing so, get shot in killed. What country? America. Why? Republicans.

Where's the next mass shooting gonna be? Any guesses? Should we try to do anything we can to prevent it? No? Ok cool. Good luck out there!