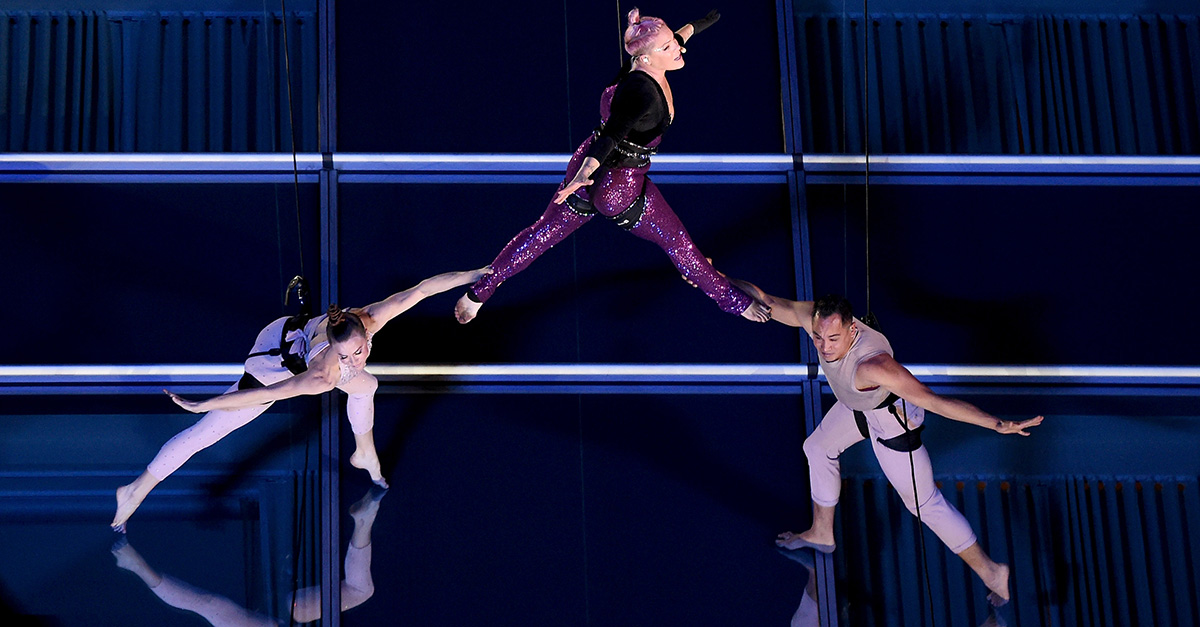 Photo by Kevin Winter/Getty Images
LOS ANGELES, CA - NOVEMBER 17: Pink performs on the side of the JW Marriott Los Angeles L.A. LIVE during the 2017 American Music Awards at Microsoft Theater on November 16, 2017 in Los Angeles, California. This was a pre-tape which aired as part of the 2017 American Music Awards. (Photo by Kevin Winter/Getty Images)

Pink has done it again!

On Nov. 19, the singer slayed the American Music Awards with this death-defying performance. For her song “Beautiful Trauma,” Pink didn’t take to the traditional stage. Nope. Instead, she performed the entire song on the side of the J.W. Marriott hotel in Los Angeles!

Pink took to the side of the building with her backup dancers as she flowed and danced on the building. A few lucky hotel guests even looked out their windows to see the singer’s performance.

Fans (including some of the most famous faces) were quick to take to social media, applauding the performance.

Just when you think you’ve seen it all, @Pink outdoes herself. Wow. #AMAs #PINKxAMAs

@Pink I️ don’t even know what to say. Seriously beautiful and amazing performance. And she did that while delivering a perfect vocal. Damn

.@Pink has just outdone herself!!!!! Singing 100% live and scaling down a highrise! Your faves COULD NEVER!! #AMAs

SHES FLYING, THIS IS WHAT WE WANT TO SEE.
QUEEN OF LIVE PERFORMANCES. #AMAs @Pink pic.twitter.com/1Nl8k6Qv7U

. @Pink's performance on the side of a building tonight is HANDS DOWN the most legendary thing I've ever seen. THAT is a true artist 😍👏🏼💖 #AMAs

The song is the title track of her newest album, which also features her other hit, “What About Us?.” She wasn’t nominated for an award last night, but does it really matter? She totally stole the show!