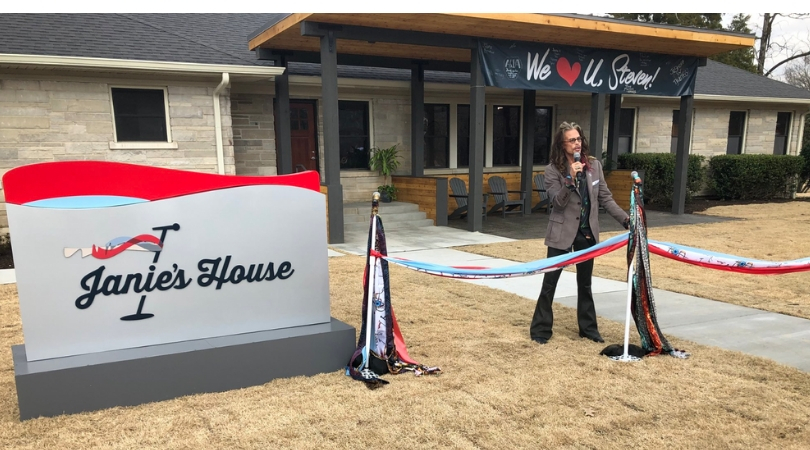 I don’t know about you, but I grew up with Aerosmith songs playing from every speaker around my house. There I was, a 6-year-old singing “Dream On” and “Livin’ on the Edge”, despite not knowing the meaning behind them. Safe to say, as I grew older, their songs made an impact in my life, and Aerosmith has become one of my all time favorite bands. So, after finding out that Steven Tyler is still going strong and continues to give back to others despite all these years, is really heartwarming. Especially for cases like these.

What is the Aerosmith frontman up to these days? Steven Tyler has announced he is opening Janie’s House, which is a home for abused and neglected girls. Yes, the rock star not only created the safe haven but also donated $500,000 to renovate the 82-acre home which is located on the Youth Villages Bartlett Campus, just outside of Memphis. Tyler attended a “scarf-cutting” dedication to officially open the home, explaining his motive behind Janie’s House, which was named after Aerosmith’s 1989 hit song “Janie’s Got a Gun”. In case you’re unfamiliar with the song, it tells the story of a girl who was abused by her father, and later takes revenge on him after years of suffering.

The singer explained how the inspiration for the song came to him when he began to deal with his own addiction problems. While in his treatment center for co-dependency, he met several young women who had been abused both emotionally and physically. As an effort to help these women overcome their problems, the singer decided to pour his emotions into the song in their honor. Wanting to help them find a safe place to run to, he decided to partner up with Youth Villages, which operates facilities and programs for children across the country.

Which is how Janie’s House was born.

The home’s main goal is to bring awareness to the issue of neglect and abuse, generating financial support to ensure girls receive the most effective services available to help them overcome any pain of abuse or trauma. The home fosters 14 girls at a time, around 26-30 annually, creating a safe space for them to stay as long as they need to. Tyler also created a fund, called Janie’s Fund, which has raised $4 million dollars in total since it first opened. The first center opened in Atlanta in 2017, and a third home is expected to open in Las Vegas later this year.