The Ross Sisters: Whatever Happened to the Famous Texas Trio? 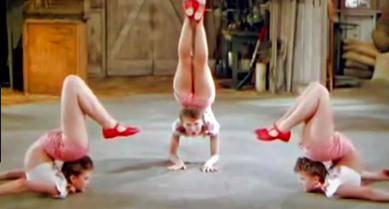 The Ross Sisters were a popular 3-part harmony trio performing music and acrobatics in the mid-1940s. The sisters, Betsy Ann Ross, Veda Victoria Ross, and Dixie Jewell Ross assumed the stage names Aggie, Maggie, and Elmira and performed three-part harmonies and contortionism. While their Hollywood stardom rose and burned out pretty fast, they managed to make a few high-profile appearances along the way.

Hailing from West Texas, the Ross sisters first made headlines in 1942 on Billboard after appearing on the show, Count Me In. The following year they found themselves at the Diamond Horseshoe Nightclub in New York City. In 1944, they were featured in the MGM musical film Broadway Rhythm performing “Solid Potato Salad.” They continued to perform in night clubs around the United States.

In 1946, the Ross sisters performed at the London Palladium. They arrived on the Queen Mary ship for the Royal Variety Performance, where they were to perform for Queen Elizabeth and King George VI. The sisters ran into a little trouble when boarding. The two youngest sisters were too young to board the ship, so they each used then the name of the older sister so they were old enough to board. Strangely enough, a few of them continued to live by the other’s name!

By 1950, three years down the line, each of the sisters had married. Which was the end of the Ross sisters as the world knew them. The short version of their post 15 minutes of fame is honestly a little bleak. But since you asked, it goes like this.

Betsy Ross is known also as Betsy Ann Ross, Dorothy Jean Ross, and “Aggie”. The latter is the name of her older sister who died an infant. She used her name to travel, so her younger sister who was too young to travel could use her name. When she stopped performing with her sisters, she married Burnice C. Hightower, an American dancer, in 1947. He was noted to be an alcoholic schizophrenic who beat her. After ten years of marriage, they divorced. Her next marriage, to Hieronymus “Rony” Abagi, resulted in two daughters, but unfortunately, they quickly divorced. After that, she went back to Hightower. It didn’t last long again because he died the following year. She died in 1996.

Veda Victoria Ross, known also as Eva Vicki Ross and Maggie Ross, married ventriloquist Robert Lamouret in 1950 in Paris. He appeared on the Ed Sullivan Show with his act. They had two daughters, as well. In 1957, Maggie Ross appeared on What’s My Line as a guest. When her husband died in 1959, she re-married but later divorced. She died in Florida in 2002.

Dixie Jewell Ross, the youngest Ross sister, was also known as Veda Victoria Ross and Elmira Ross. She married Dickie Henderson, an English entertainer, under her sisters birth name (Veda Victoria Ross) in 1948. Together they had a daughter and a son. Dixie died on July 10, 1963, on her wedding anniversary, overdosing on barbiturates. She is buried in Gunnersbury Cemetery, in Acton.

The footage from Broadway Rhythm was used in a 1994 compilation film called “That’s Entertainment III”, reminding the world of their skills. The American singers will forever be remembered as the young harmonic trio that took the world by storm for a short, but highly entertaining time.

Watch: The Haunting Legend Behind The “Black-Eyed Children”