The Haunting Legend Behind The “Black-Eyed Children” 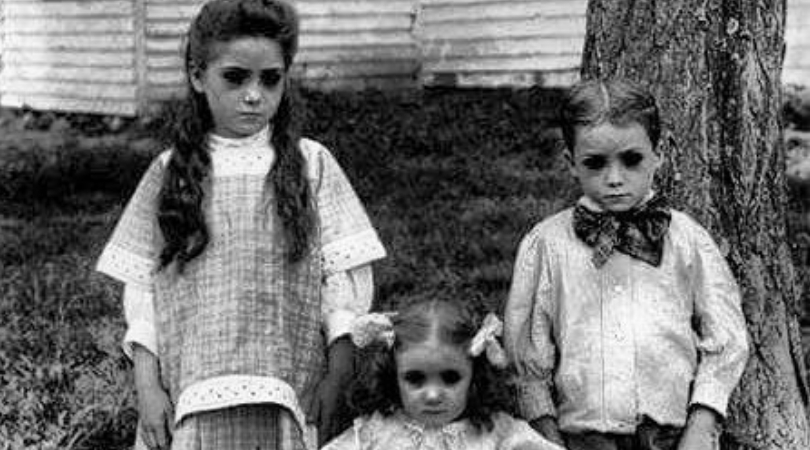 Welcome back to another segment of “scary legends with Rare”, with yours truly. I hope you guys enjoy reading the paranormal content because I literally have the scariest screenshots on my laptop and I am gonna be sleeping with my lights on for the next few nights, maybe weeks. But, I’ve never been one to back down from a challenge, so here you go. Hope you sleep better than I do.

Today’s urban legend/ghost story hails from the city of Abilene, Texas. Some claim it’s a hoax while others clamored for paranormal investigators to debunk it. You can decide for yourself what you think. Perhaps you’ve even heard of this one, they’re called “The Black Eyed Children.” They’re of no relation to the band Black Eyed Peas, by the way, so skip that Google search.

Who are The Black Eyed Children

The Black Eyed Children also called “black-eyed kids” are mysterious beings that look to be of kids between the ages of 6-16-year-old. They only appear at night and to unsuspecting adults alone in parking lots or in their homes. The kids come in groups of two or more and often ask for favors. The favor could be to make a phone call, to get a ride home, to come in a get something to eat or to use the bathroom. The few people who have had interactions with the black-eyed kids express feeling unexplainable fear when the children are near. No one really knows where they come from. Extraterrestrial, UFO’s, vampires, and of course, demons are a number of the assumptions around the kids.

Brian Bethel was one of the first people to document having met black-eyed children in real life. He published a transcription of the event on his blog back in 1998. The following is part of his story.

It was around 9:30 p.m. on January 16, 1998. and Brian left his apartment in Abilene, Texas for the Dropbox to pay his internet bill. On the way, he stopped at the dollar movie theater next to his service provider’s building to use the glow of the marquee as light to make out his check. As he did this, there was a knock on the window and saw two young boys. He placed them between ten and fourteen years old. He describes the boys as:

“Boy No. 1 was slightly taller than his companion, wearing a pull-over, hooded shirt with a sort of gray checked pattern and jeans. I couldn’t see his shoes. His skin was olive-colored and had curly, medium-length brown hair. He exuded an air of quiet confidence.

Boy No. 2 had pale skin with a trace of freckles. His primary characteristic seemed to be looking around nervously. He was dressed in a similar manner to his companion, but his pull-over was a light green color. His hair was a sort of pale orange.

They didn’t appear to be related, at least directly.”

Almost immediately he knew something was up and felt a sense of fear. The first boy began to tell Bethel that they need his help. They wanted to see the new Mortal Kombat movie but forgot their money. Instead of asking for the money itself, the boy asks for a lift to their house to retrieve it. Our narrator is nervous and hesitant as the first boy continued to try to coax him saying things like, “C’mon, mister… We just want to go to our house. And we’re just two little boys” and “C’mon, mister. Let us in. We can’t get in your car until you do, you know…Just let us in, and we’ll be gone before you know it. We’ll go to our mother’s house.”

Brian Bethel found himself unlocking the door, without realizing and as if instructed by the “child” to do so. After catching his hands he looks back at the kids with a fresh perspective. That’s when he realized that the kids’ eyes were solid black. No sclera. No iris. No pupil.

All the stories of people meeting Black Eyed Kids claim that once you realize their eyes are all black, things get dangerous. The second boy continued to stand there completely silent while the first boy threatens him saying, “We won’t hurt you. You have to LET US IN. We don’t have a gun.” According to Bethel, the boy was implying that they didn’t NEED guns. He started pulling at the door and demanding to be let in. With the courage he managed to find, Bethel pushed his car into reverse and sped home, leaving the boys where he found him.

CCTV camera footage shows a man having to stop on his motorcycle when he sees what looks to be a girl in the middle of the road. Then things get a little eerie. A lot of people are saying it’s a ghost, others saying black eyed child, others say hoax. What do you think ? Let us know⬇️ follow @beastly_pumpkin to join the discussion on all creatures, monsters and cryptids. 🎃 🎃 🎃 🎃 🎃 #ghostsighting #ghosthunter #mystery #scaryvideo #eerie #creepy #scary #spooky #ghost #ghosts #paranormal #caughtoncamera #caughtontape #creatures #monsters #cryptids #blackeyedchildren #losttapes #realorfake #monstersarereal #thingsthatgobumpinthenight #ghostly #cctv #haunt #haunting #poltergeist #haunted #nightshift

Fast forward to November 14. 1998, and Brian has an update for his ghost hunting blog/ email list. He apparently didn’t talk too much else about the BEK after the first post- even though his audience was hounding him with questions. The next one to encounter the kids is his friend, Jon. Jon Northwood was one of Brian’s online friends who was a pagan rights coordinator for an Oregon organization called “SPIRIT”. Brian Bethel claims that he never told this friend about his encounter. Yet, this is an interaction they had towards the end of the same year. It takes place over chat. It starts with Jon asking the chat if they “really believe in ghosts or “kids with funny eyes” and then launches into his own anecdote with a group of black-eyed kids.

Since then, the accounts have slowly grown. They reached an all-time high in 2013 when they made the news thanks to a Weekly Strange video submitted to MSN. A video was uploaded giving an alleged look at them. It was, however, quickly discredited, which only increase the mystery and curiously shrouding the mysterious children. To date, there have been many claims, conversation threads, countless videos and even a book by author David Weatherly. An indie director, Nick Hagen directed a horror film incorporating the eerie characters into the plotline. It’s called “Black-Eyed Kids” and incorporates a Youtube series he was working on called “Sunshine”. The movie was released on 12-21-12, right before the world was slated to end according to the Mayan calendar. For that extra spooky feel, ya know?

So, What Are They?

No one really knows what these kids are. The people who claim to see them (and spend their free time hunting ghosts) swear they’re legit. Others aren’t so convinced. The most interesting theory concerning the children’s origins I’ve come across was this one. It comes from a book, Your Haunted Lives: The Black-Eyed Kids. According to this legend, the kids may be something called “Otkon” spoken of in ancient Iroquois Indian legends.

?The Iroquois Indians believed in a dark power called the Otkon that could take over children and an ?Evil One? who would mate with human females to produce black-eyed, chalky skinned, children. These children were killed by the tribe soon after birth and burned to stop them from resurrecting. Children wandering alone in the woods could also be taken over by Otkon and would re-emerge with black eyes and pale skin acting nervously while repeating themselves over and over. Their goal was to destroy the tribe and infect all of the people with Otkon.?

Are you a believer? Naturally, do with this information what you will. I personally take everything I see on the internet with a grain of salt. However, I will say this. Good Ol’ spooky season is almost upon us, my friends. So, beware.