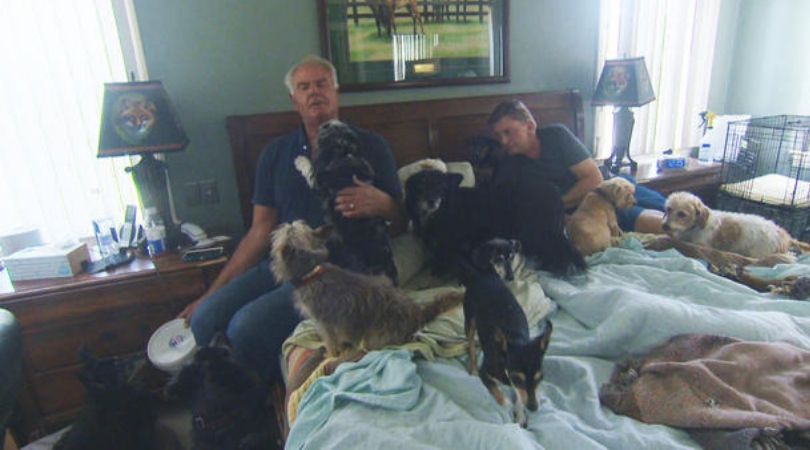 A South Carolina couple has decided to do the unthinkable, and will now have to buy unlimited amount dog food for the next few months! Ron Danta and Danny Robertshaw from South Carolina, have adopted over 11,000 dogs since 2005, in an effort to save dogs from being euthanized, and currently, live with 86 rescue dogs in their loving home.

The couple stated they share a king-size bed with 15 to 18 dogs a night, commenting on how they are “the guests” of the house. Following Hurricane Katrina, the couple provided daily care and shelter to homeless or stray dogs left after the storm and eventually opened up their own rescue shelter. The animal shelter, now called “Danny & Ron’s Rescue”, provides a home for puppy mill dogs, shelter pets and bait dogs, and is located in their home in Rembert, South Carolina.

The couple had only planned to rescue some dogs for a couple weeks, but there was always one more dog who needed help, which is how they got to where they are now. Over ten years and a thousand dogs later, the two are now having a film made about their lives due to them saving these animals! What a special treat!

The film, “Life in the Dog House” is said to open in select theaters this year, on September 12. It explores the tribulations and trials, and the joy that comes along with housing thousand of rescue dogs in your home. What’s even better than the film? All net proceeds will be donated to rescue charities all around the country! Let’s all aim to be like them, animal lovers for the win!