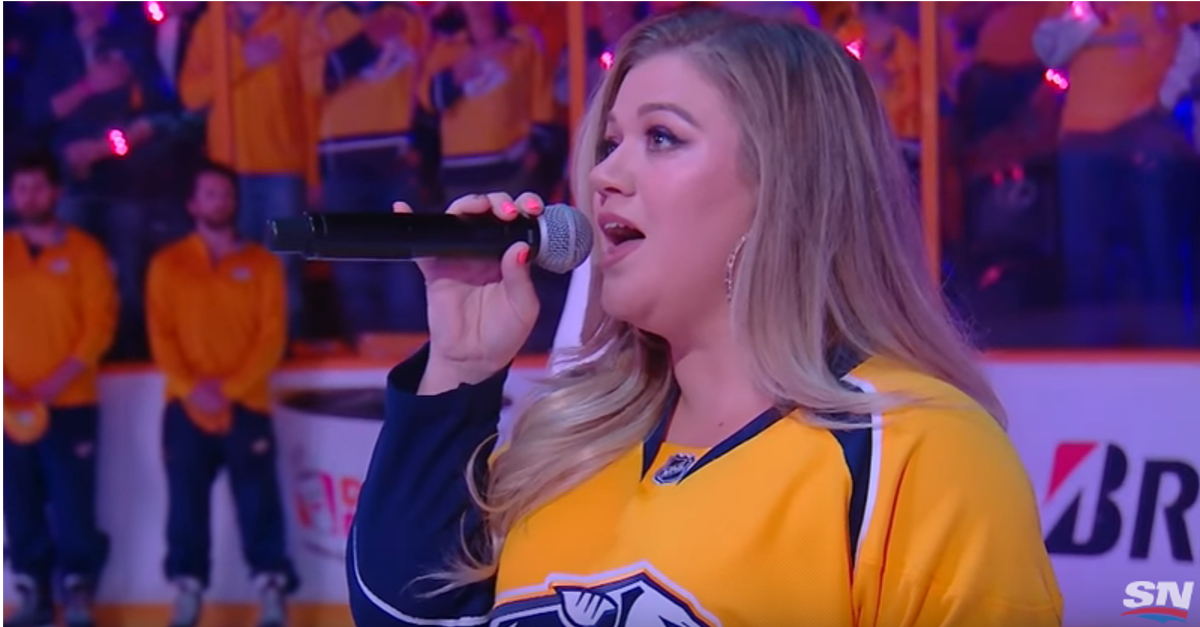 Kelly Clarkson continued the country music tradition of honoring the Nashville Predators with the national anthem on Thursday, May 18.

The 35-year-old powerhouse stepped onto the ice at Nashville’s Bridgestone Arena ahead of Game 4 of the Western Conference final between the Predators and the Anaheim Ducks.

For her performance, Kelly appropriately paired her denim jeans with a Predators jersey. The Smashville crowd roared with excitement, as she beautifully put her signature pipes on the famous song. Kelly didn’t take part in the ceremonial towel-wave prior to the NHL playoffs game though. Instead, that role went to Rock band Kings of Leon.

Kelly’s performance of the “Star-Spangled Banner,” follows a string of other country artists who sang the anthem as part of the Preds entry into the Stanley Cup Playoffs. Prior to her rendition, it was Keith Urban, who performed the song. Other big-named artists like Lady Antebellum, Luke Bryan, Vince Gill, Little Big Town and Carrie Underwood also put their vocals on the tune earlier this year.

After her anthem performance, Kelly took to Twitter with one request. She tweeted, “Dear @PredsNHL please win, or people will blame me! #ANAvsNSH Go Preds!”

Despite her wish, the Preds lost the game in overtime. The Ducks emerged victorious in a final score of 3-2.

RELATED: Kelly Clarkson’s idea of a girls’ getaway isn’t what you might expect

“We are so sad we lost BUT what a great game!! #meandriverrose #GoPreds,” Kelly Instagrammed, along with an adorable picture of herself and her daughter, River Rose.

We are so sad we lost BUT what a great game!! #meandriverrose #GoPreds

We are bummed about the loss too! But, we are so loving that picture!