Something seemed fishy to Carrie Underwood, and she let Twitter know about it 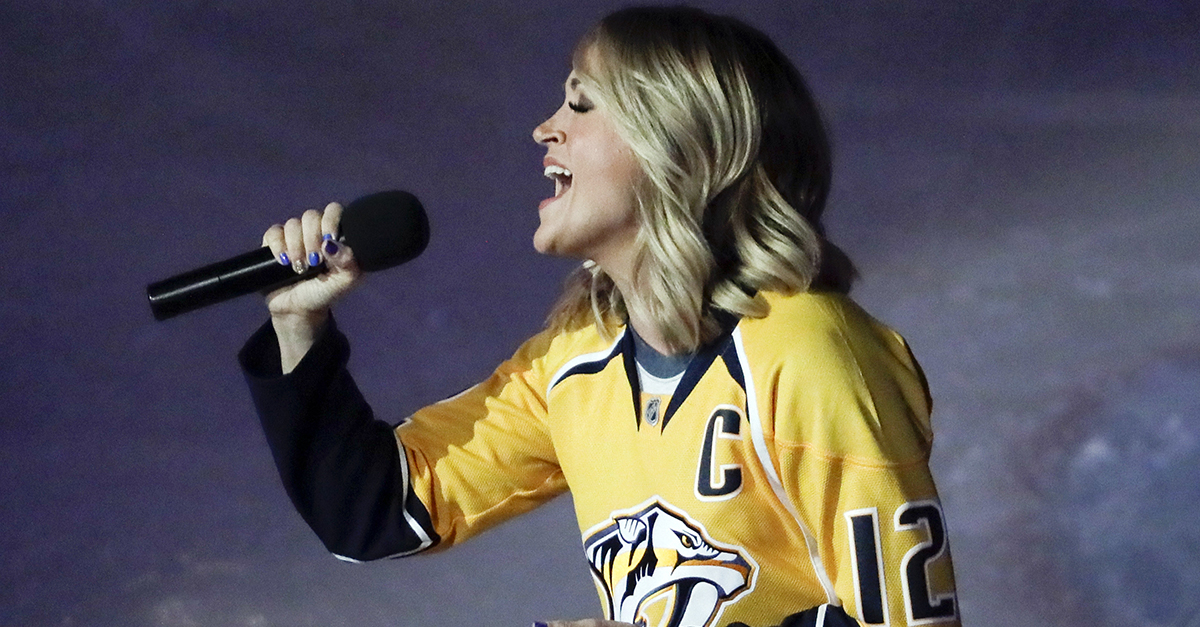 Things haven’t been great for Nashville’s hockey team, the Predators, in the Stanley cup playoffs. Their opponents, the Pittsburgh Penguins, have proven to be formidable foes and are leading the series two-to-one. And Carrie Underwood, wife of Preds captain Mike Fisher, is taking a touch of blame for this most recent loss.

If you missed Game 1 of the playoffs, then let us catch you up to speed. A young man, Jake Waddell, was evicted from the game after throwing a catfish onto the ice. This is a good luck tradition for the Predators, but the Penguins were so staunchly against it that Jake was charged with possession of an instrument of crime.

This didn’t sit well with Preds fans, who established a GoFundMe page to help with the young man’s legal defense. Ultimately, the charges were dropped, but the groundwork was already laid for another catfish to make an appearance. And Fox Sports reporter, Clay Travis, decided the responsibility for the appearance should fall on Carrie, and he tried to hit her right in her soft spot—her heart.

Clay posted a challenge on his Twitter page offering $10,000 to the charity of her choice if Carrie was the next one to toss a fish onto the ice at Game 2 on May 31. Others who saw the post, including PGA golfer Brandt Snedeker, radio personality Bobby Bones and Orca coolers, offered their two cents: $10,000 to up the ante until a total of $70,000 was reached.

We're in for $10,000 too @BrandtSnedeker… told @ClayTravis we would even provide the fish, heck we'll throw in the cooler too! #GoPreds pic.twitter.com/veYeJE2Roe

Clay also offered to pay to defend anyone else who might attempt the precarious fish toss.

We will also defend anyone for free who is able to get a catfish on the ice tonight during Preds-Penguins. #Smashville #dbap

Carrie did step up to her challenge, but in her own way. The fish she put on the ice was husband Mike Fish-er.

Unfortunately, the Preds bowed to the Penguins in a jarring 4 to 1 loss and Carrie took it pretty hard, tweeting her anguish throughout the game.

How was that not a penalty?!

This game is being called so insanely awful, I can't even…

Just told my manager that she might have to lock me out of my own twitter! 🤐🤐🤐😂 #PredsPride #IJustLoveMyHusband 💙💛

But in the end, she was gracious.

Thanks, @PPGPaintsArena for having us & to all the Pens fans who were super sweet to us!

RELATED: Carrie Underwood is adorably caught getting her groove on

And when Clay teased the country star about her part in the defeat, she took it on the chin.

This is what happens when you don't throw a catfish on the ice.

Obviously, all of the challenges, jokes and teasing were done with a smile and a spirit of levity and good sportsmanship. However, that doesn’t mean that Carrie isn’t ready for her home team to throw down when they face off against the Pens in Game 3 on June 3 in Nashville.

And who knows — that fish may fly from Carrie’s hands when she’s on her home ice.