The cast of the Netflix series “Stranger Things” was awards the Screen Actors Guild award for Outstanding Performance by an Ensemble in a Drama Series Sunday night.

Accepting the award on behalf of the group, actor David Harbour, who plays Chief Jim Hopper in the series, gave an impassioned and rousing speech, commenting indirectly on the political events of the last week, and moving the audience to their feet.

RELATED: Not even an hour in to the SAG Awards and all of the celebrities are taking shots at President Trump

“In light of all that’s going on in the world today, it’s difficult to celebrate the already celebrated ‘Stranger Things,'” he said, calling the award a call to arms for fellow actors to “go deeper and through our art battle against fear, self-centeredness, and exclusivity of our predominantly narcissistic culture.”

As we act in the continuing narrative of ‘Stranger Things,’ we 1983 Midwesterners will repel bullies. We will shelter freaks and outcasts, those who have no home. We will get past the lies. We will hunt monsters! And when we are at a loss amidst the hypocrisy and the casual violence of certain individuals and institutions, we will, as per Chief Hopper, punch some people in the face when they seek to destroy the weak and the disenfranchised and the marginalized! And we will do it all with soul, with heart, and with joy. We thank you for this responsibility.

The speech moved the crowd to their feet, vigorously cheering for Harbour.

Please don’t miss the faces being made by actress Winona Ryder during the speech. 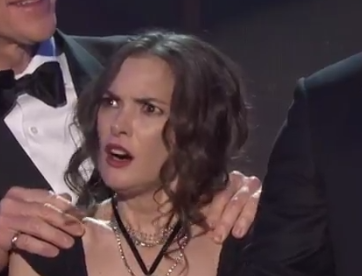 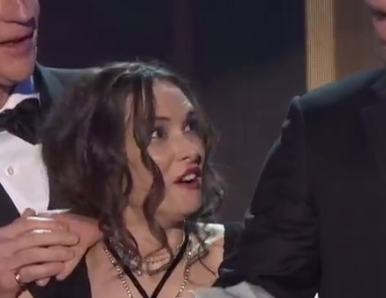