Texas Grandmother Dies in the Stands at Grandson’s Football Game 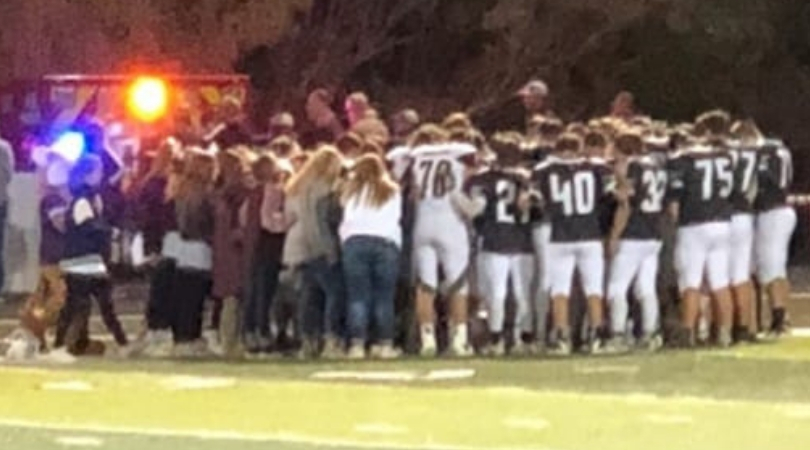 A Hawley football player is receiving support from his team and friends after losing his grandmother during one of his football games. 18-year-old Ethan Davis has been dealing with more grief in the last year than any high school senior should have to. Davis lost his mother to cancer last fall and has been living with his grandmother since.

On Friday, November 3, his high school was playing against Forsan, when Ethan caught a 2-point conversion late in the first quarter, to extend the Bearcats’ lead to 16-0. Moments after his big play, the crowd gasped in shock, after his grandmother, who was watching from the stands, suffered a heart attack.

Paramedics quickly rushed to the scene and transported 74-year-old Dolly Joyce Dodgen to a hospital in Big Spring. The game was immediately delayed while players and fans waited on the ambulance. To help Davis in a moment of hurt, a mother posted a Facebook picture of both teams coming together, praying for the health of Davis’ grandmother.

“In the midst of the unknown and the worry, our Forsan Buffaloes walked across the field to join the Hawley players and they all prayed together. So many times these kids/young people are criticized for the way they are, but last night they showed us how things are done.”

The post shows a sense of unity and hope for other high school students, reflecting on how even though they are enemies on the field, as humans we must all come together in times of hardship. Unfortunately, Joyce Dodgen passed away at the hospital during the third quarter, with Ethan by her side.

Forsen Elementary extended their deepest condolences to the family. Her obituary reads she was a devoted wife mother and grandmother to her family and worked in the field of medical transcription. She enjoyed cooking for her family and send daily text filled with love and laughter to her grandchildren and daughters. The 74-year old was ” the complete example of a lady, and her contagious smile will be missed daily by all of us.”