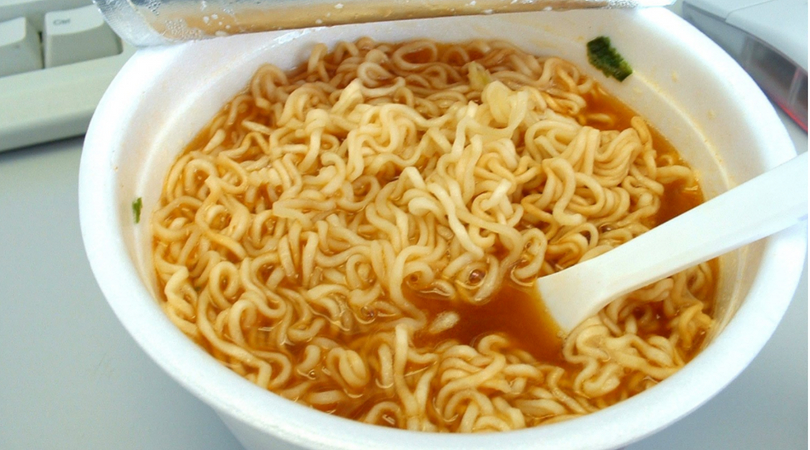 “How do you plan on becoming rich?” said Tim while eating a sandwich next to a Burger King bench.

Okay, maybe that exact conversation didn’t go down, but authorities are looking for a man with a hankering for ramen soup. Police in Fayette County, Georgia is on high alert after someone stole nearly $98,000 worth of ramen noodles inside a trailer. According to Fox 5 Atlanta, a 53-foot trailer was parked at a Chevron on the northbound side Georgia Interstate Highway 85 and was packed with ramen noodle packages.

The theft allegedly occurred sometime between July 25 and August 1. The local sheriff said the large trailer had been ‘secured’ at the time and did have permission from the owner to park at the gas station. Fayette County Sheriff?s Office Deputies are looking for the culprit in multiple car break-ins, a stolen motorcycle, and the nabbed noodle trailer.

Okay, but like, my question here is, what does someone do with so much ramen?

Who the heck knows! Especially since authorities won’t tell us if they are Maruchan or Top Ramen, which is pretty important! You see, one pack of Maruchan goes for 29 cents, according to Target, so multiply that, divide that, add that, whatever you want to do, to get that $98,000. Now, in the case of Walmart, a case of 25 packs of ramen costs a little bit less than $12. If you do the math, that meant the truck could have easily been carrying more than 8,100 cases of ramen noodles- or at least 200,000 individual packs! Jeez, Louise! What a smart noodle crook, huh?

Watch: What Are Bacon Bits? A Look at the Ingredients in 3 Popular Kinds