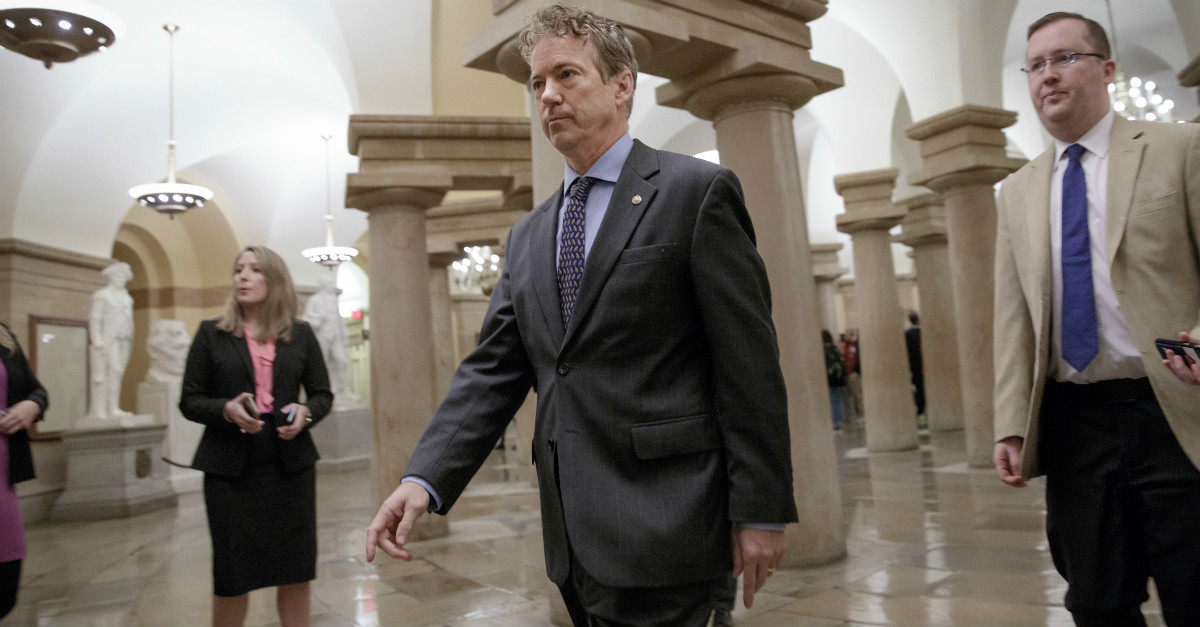 AP Photo/J. Scott Applewhite
Sen. Rand Paul, R-Ky., a member of the Senate Health, Education, Labor, and Pensions Committee, walks to a room on Capitol Hill in Washington, Thursday, March 2, 2017, where he charges House Republicans are keeping their Obamacare repeal and replace legislation under lock and key and not available for public view. (AP Photo/J. Scott Applewhite)

Sen. Rand Paul’s (R-Ky.) amendment that would sunset the war authorizations that give the president the ability to engage in virtually unlimited military intervention was blocked on Wednesday.

The vote on Paul’s amendment to the National Defense Authorization Act was tabled, 61-36. If it had passed, it would have repealed the 2001 and 2002 Authorization for the Use of Military Force passed after 9/11 six months after the bill became law. Paul argued that Congress would have time to properly debate foreign policy within those six months –  a legislative reclamation of the ability to declare war from the executive branch.

“I don’t think that anyone with an ounce of intellectual honesty believes that these authorizations from 16 years ago and 14 years ago … authorized war in seven different countries,” Paul said on the senate floor before the motion to table.

“I am advocating a vote … on whether or not we should be at war,” Paul added. “It should be a simple vote. It is like pulling teeth.”

Opponents of Paul’s amendment worried that it might inhibit America’s ability to wage war.

Sen. Jack Reed, (D-RI), worried that not having a replacement immediately would hurt U.S. military capabilities. “You can’t replace something with nothing, and we have nothing,” Reed said. “This would be a different debate and a different vote if we had an AUMF before us that would supersede the existing authorities.”

Paul pushed back on this argument, “Do your job, this is your constitutional role.” He added, “Let [2001 and 2002 AUMFs] expire and, over the next six months, let’s debate whether we should be at war and where.”

The only two Republicans to join Paul in supporting his amendment were Mike Lee of Utah and Dean Heller of Nevada. 13 Democrats also voted to kill Paul’s amendment.

But some of the most progressive senators – including Bernie Sanders and Elizabeth Warren – voted in favor of Paul’s bill.

It’s long past time for Congress to do right by our troops & the American people, which is why I’m supporting @RandPaul’s AUMF amendment.

In a statement to Rare, Sen. Paul said even though his amendment failed, each senator is now on record.

“Today for the first time in 15 years, Senators were forced onto the record on our wars and their authorizations,” Paul said. “36 members voted my way, which means we have more work to do for constitutional government and to finally end these 16 year old wars.”

“I will not back down on either front,” Paul added.

The NDAA bill Paul attempted to amend is expected to pass on Wednesday.