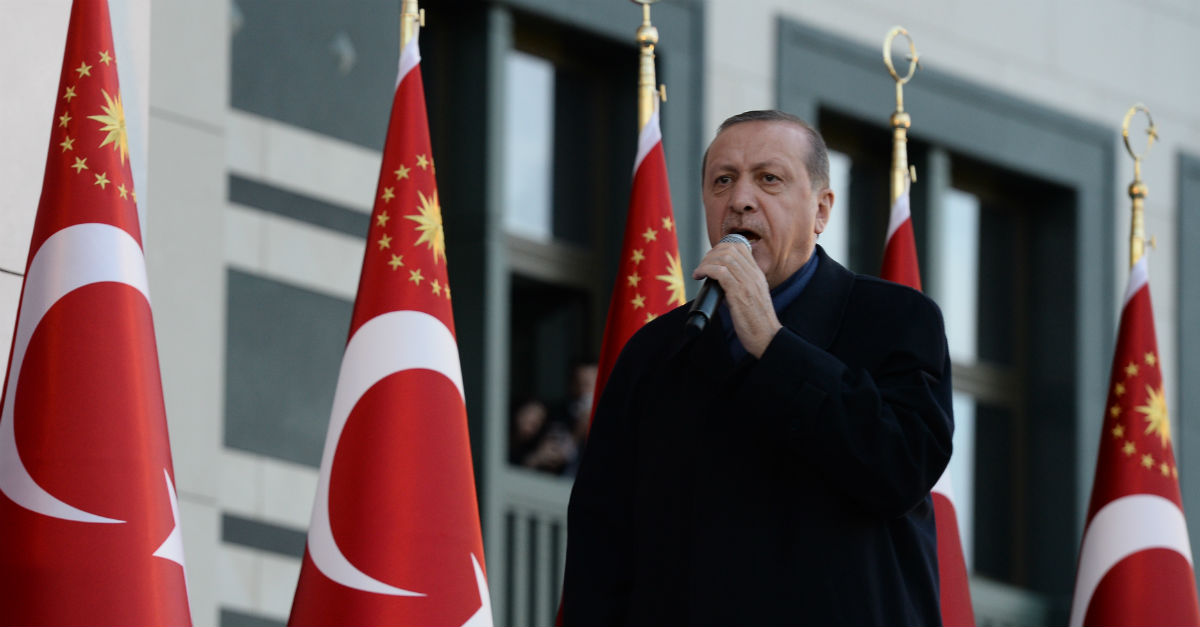 Gokhan Sahin/Getty Images
ANKARA, TURKEY - APRIL 17: Turkish President Tayyip Erdogan gives a referendum victory speech to his supporters at the Presidential Palace on April 17, 2017 in Ankara Turkey. Erdogan declared victory in Sunday's historic referendum that will grant sweeping powers to the presidency, hailing the result as a 'historic decision. 51.4 per cent per cent of voters had sided with the 'Yes' campaign, ushering in the most radical change to the country's political system in modern times.Turkey's main opposition calls on top election board to annul the referendum. OSCE observers said that a Turkish electoral board decision to allow as valid ballots that did not bear official stamps undermined important safeguards against fraud. (Photo by Gokhan Sahin/Getty Images)

This is INSANE. Erdogan’s goons rough up Kurdish protesters ON EMBASSY ROW, as D.C. cops valiantly try to stop them. https://t.co/xXQP1BzCxA

By Wednesday, the State Department acknowledged the attacks in a statement:

The letter stated a “concern” for the violent incident, especially at it pertained to the First Amendment right to the freedom of speech and assembly.

WATCH: @StateDept confirmed Turkish security personnel were involved in the fight with protesters outside Turkey’s embassy in DC: pic.twitter.com/ROFu3Hp3Z3

US officials confirm to NBC News men who beat protesters outside Turkish Embassy in DC are Pres. Erdogan's bodyguards https://t.co/jaxfflCu7G