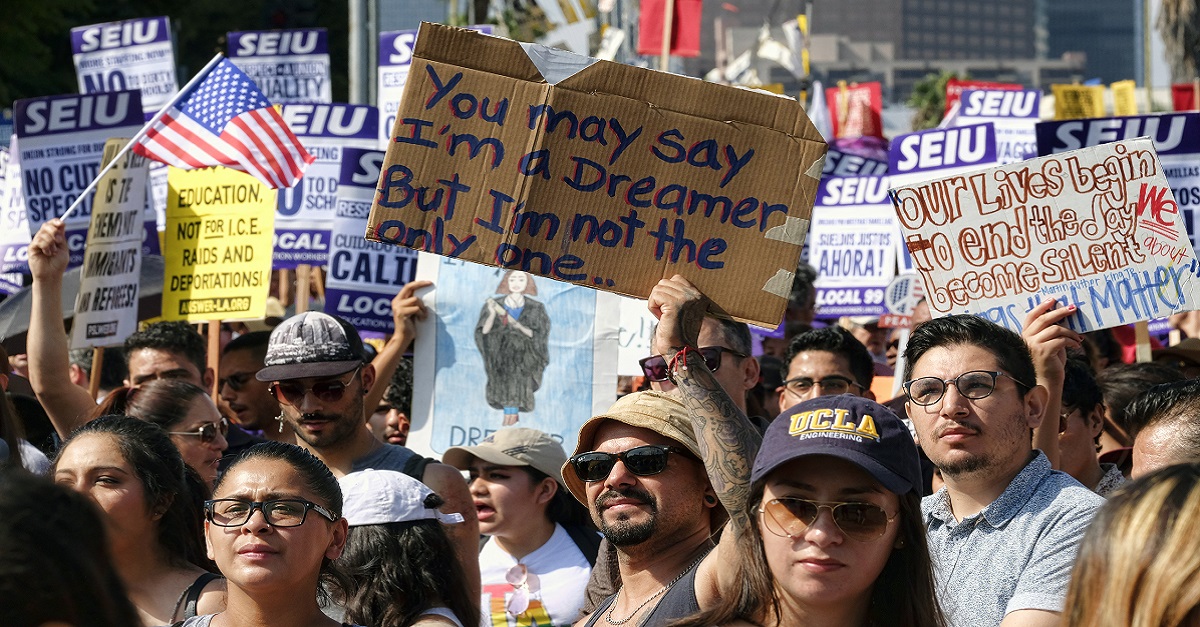 AP Photo/Richard Vogel
Supporters of the Deferred Action for Childhood Arrivals, or DACA chant slogans and hold signs while joining a Labor Day rally in downtown Los Angeles on Monday, Sept. 4, 2017. President Donald Trump is expected to announce this week that he will end the Deferred Action for Childhood Arrivals, but with a six-month delay, according to two people familiar with the decision-making. (AP Photo/Richard Vogel)

Congress has six months to figure out what will become of the nearly 800,000 young people, colloquially called Dreamers, brought to the U.S. as children by their undocumented immigrant parents. But lawmakers? strategy is, so far, anyone?s guess.

Tuesday?s announcement started the clock ticking for Congress to preserve the program’s protections and set a way forward before DACA protection recipients begin losing their status on March 5, 2018. DACA — the Deferred Action for Childhood Arrivals program — was an Obama administration program, without which the Dreamers could face deportation to countries they do not even remember.

Minutes after Attorney General Jeff Sessions made the formal announcement of the program?s end, saying it “deliberately sought to achieve what the legislative branch specifically refused to authorize on multiple occasions,” House Speaker Paul Ryan (R-Wisc.) released a statement supporting Congress taking the reins on immigration but offering little detail as to what that would entail.

?It is my hope that the House and Senate, with the president?s leadership, will be able to find consensus on a permanent legislative solution that includes ensuring that those who have done nothing wrong can still contribute as a valued part of this great country,? Ryan said.

The Trump administration pitched the move as the “least disruptive” open path after facing a threat from 10 conservative state attorneys general to challenge DACA in court, anonymous senior administration officials informed press, according to CNN.

“Congress, get ready to do your job – DACA!” Trump tweeted Tuesday morning, as lawmakers returned to Capitol Hill from their annual August recess.

In a move many Republicans have since decried as going around Congress, President Barack Obama created DACA with an executive order in 2012 for people without serious criminal histories who came to the Unites States before 2007 and were younger than 16 at the time. The program allows eligible young people to seek protection for renewable, two-year periods starting at age 15. Immigration experts say the program could end up covering 1.3 million people if it continues, according to NBC. About 8,000 renewal requests are now being filed per week.