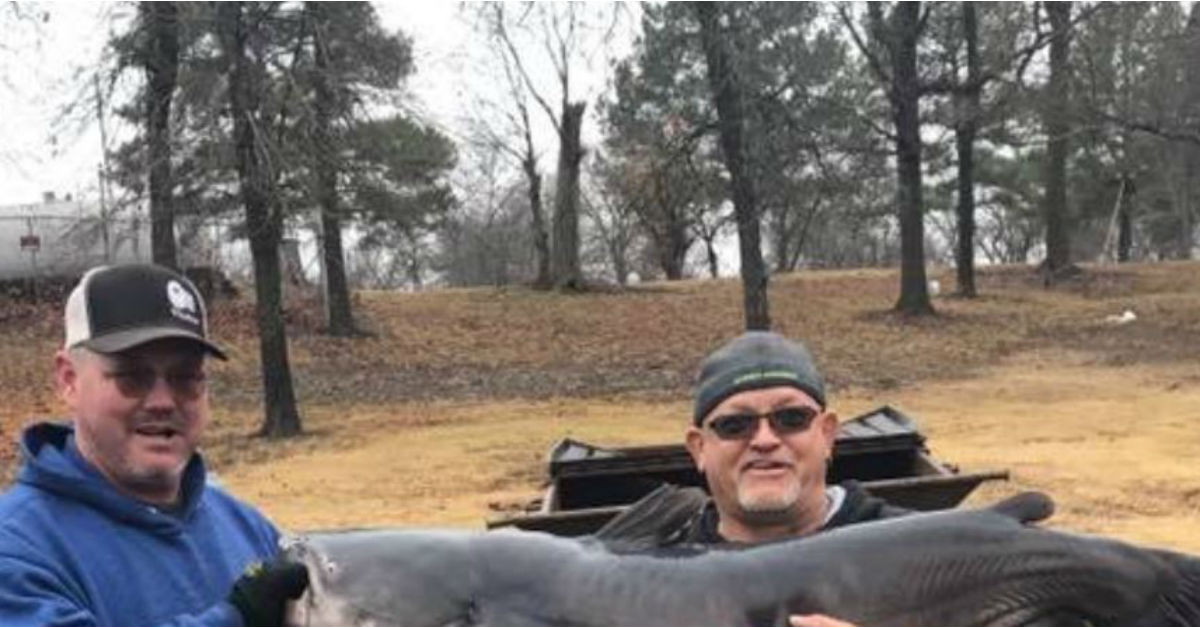 Bernie McBryde of Oklahoma has a fish tale that most of us will have a tough time believing –– but the skilled angler thought ahead and got a picture of his monster catch. And the unbelievable monster was almost too big for McBryde to hold by himself.

McBryde caught the 51-inch-long blue catfish in Fort Gibson Lake; when he put it on the scales, the gargantuan creature weighed in at 82.7 pounds — a whole eight pounds more than the previous record at Fort Gibson Lake. He told Tulsa World “When he come up and I seen the size of his head and his body, holy –– I’ve got a net you put a family of three in but we couldn’t get him in there.”

The Oklahoma fisherman was using a jug line (a method in which a hook and line are suspended from a floating jug), rather than a rod and he recalls that the fish kept his jug underwater for a long time but he couldn’t stay down forever. McBryde said, “he’d take it under and we’d have to wait on it to pop back up somewhere. I thought ‘oh boy, here we go.'”

But McBryde decided to do the noble thing and release the fish — he brought it on board and put it in his boat’s live well before getting it to a scale then releasing it. He told Tulsa World “I gave him a big old kiss and said ‘maybe I’ll see you again someday’ and let him go.”

While McBryde’s catch is enough to have you switching to jug lines for good, that whopper still isn’t as big as these animals get. The Indianapolis Star reports that in 1999, an Indiana man pulled in a 104-pound blue catfish in the Ohio River. That monster currently holds the Indiana record.