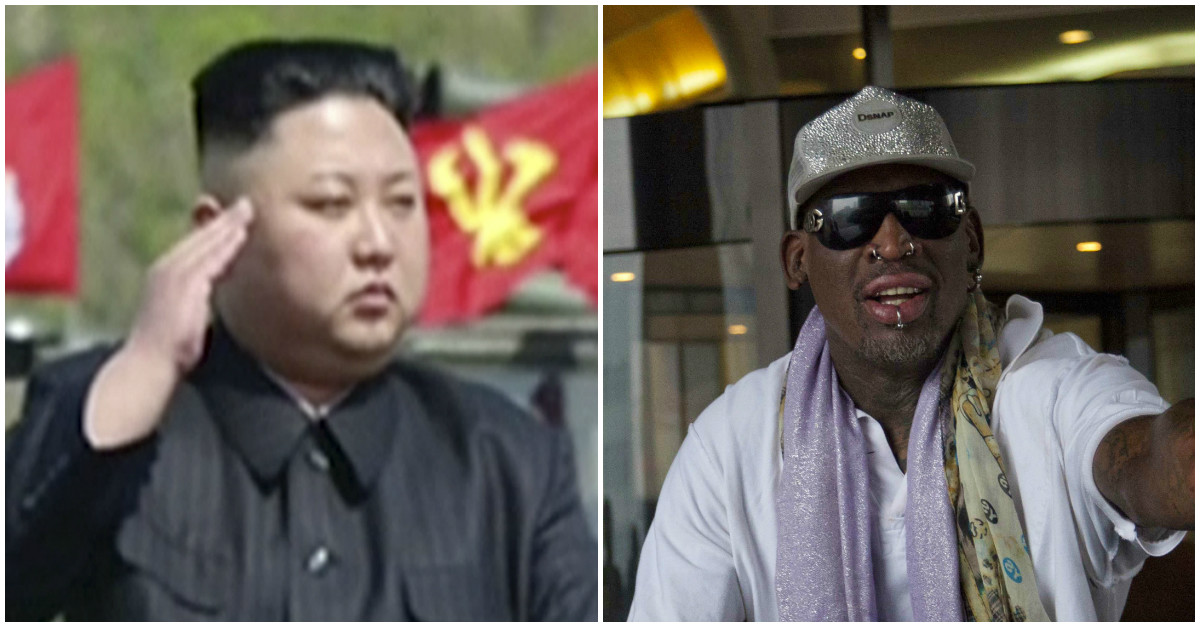 Former NBA rebounding machine and notorious tough guy Dennis Rodman is backing his dude Kim Jong-un and claims the dictator “jokes,” loves the “Rocky” theme song and is “just like anybody else.”

RELATED: Donald Trump just got a glowing endorsement from one of Kim Jong Un?s biggest supporters

In an exceedingly bizarre interview with DuJour Magazine, as if it would be anything other than bizarre, Rodman said that he believes Kim Jong-un is “for the people,” that “no one?s ever held his baby before but me,” that “Rocky” and “Dallas theme songs play for hours on end” and that North Korea “just want[s] people in America and the government to know they don?t hate Americans” and want to work with the U.S.

Rodman said North Korea doesn’t look as communist as it did when he first visited.

?When I first went there it was so […] communist. Dry and dreary […] like ?The Walking Dead.? But the third time I went there, wow. [Pyongyang, the capital] changed a lot,” he said “[Kim] is building all these new condos and hotels. He built the largest water park in the world, a ski resort and this big bowling alley.?

In almost the same breath, Rodman told a story of how he first met Kim Jong-un, wondering why people were bowing before “this f*cker* and crying for 25 minutes.

When asked if he was shocked by something he saw in North Korea, Rodman told this story:

It was only one thing. When I walked into that stadium [for the first game], I sat down, and this little guy walks in. The Harlem Globetrotters were playing, and I was sitting on the bench, and he sits right beside me. Seriously, I didn?t know who this f*cker was! People were sitting there kissing his hand and crying and giving their babies to him. I couldn?t believe these people?men and women sitting there crying for 25 minutes ? and this kid?s like yay tall! They had this little chant and all the people were on their knees bowing down to this guy. That?s what shocked me right there. I?ve been around ? I?ve seen a lot of leaders ? but not like that. That?s how I actually met Kim.

“I?ve never told this to anyone, but the last time I was there, they just came out and started saying stuff about what they want from Americans. How they want to rewrite the peace treaty, they want us to get the ships out of South Korea,” he said, claiming that the sour perception of U.S.-North Korea relations is just perception.

?[Kim’s] saying the reason why they have the nuclear bombs is because they know that Americans think they can take over. He says, ?I don?t want to bomb anyone. But we keep our nuclear weapons because we?re such a small country ? that?s the only way we can defend ourselves,'” he continued. “They just want people in America and the government to know they don?t hate Americans. They want to work with Americans.?

Missile parades, test launches — failed or successful — semi-regular bold public statements from sources named and unnamed inside the North Korean government through state-run media, and propaganda videos, however, seem to be sending a different message.

Rodman also mentioned that Kim Jong-un “loves Doors and Jimi Hendrix” and that a “live band [he saw there] only played two songs for four hours: the theme songs from Rocky and Dallas.”

You may recall that Rodman, who has visited North Korea multiple times, defended Kim Jong-un when the Sony hack and the movie “The Interview” was still controversial.

He called the dictator a “friend” and questioned that North Korea would hack Sony over a movie.

RELATED: Watch how Donald Trump responded to a question about Kim Jong-un and dealing with North Korea heading forward

@realDonaldTrump has been a great friend for many years. We don't need another politician, we need a businessman like Mr. Trump! Trump 2016