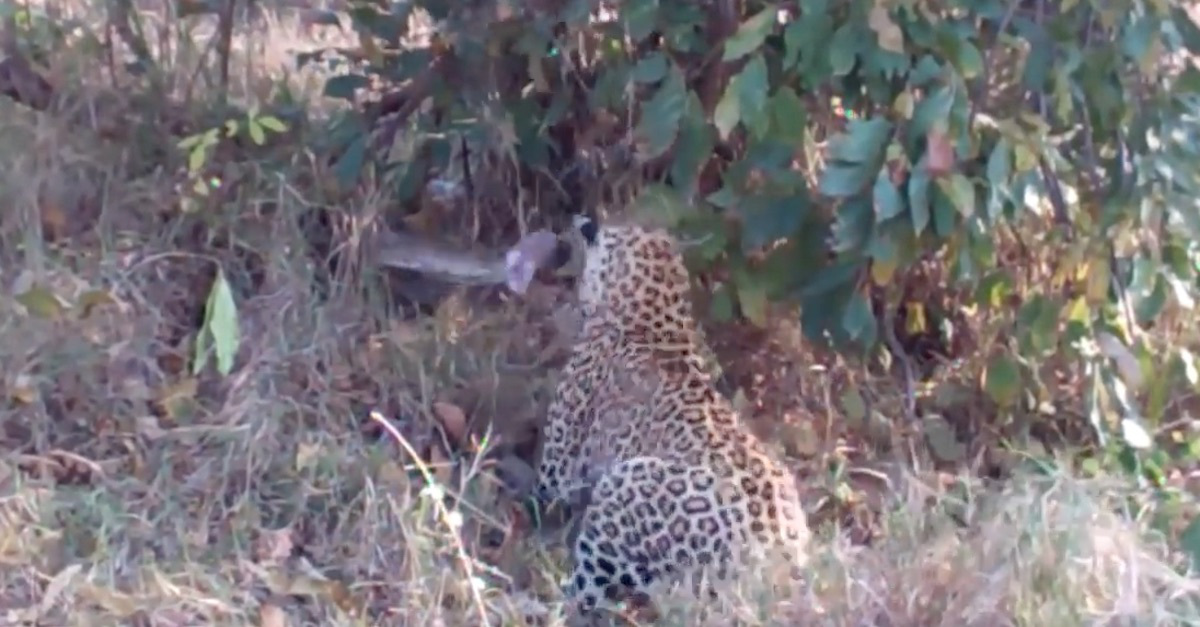 RELATED:  This heron looks like it?s surfing on water, but it?s really just riding a hippo

A rock python at Kruger National Park in South Africa used the old snake in the grass technique on a mother leopard named Metsi whose cub was in the vicinity and lost it all.

Although the rock python isn’t venomous it is still known for strangling huge animals — antelope and crocodiles, for example — and swallowing them whole.

When the mother leopard staked out the brush she knew contained a predator, the python makes a last-ditch leap forward with mouth agape.

The snake was promptly dispatched for eternity and turned into family dinner.

RELATED: A hunter stumbled upon a huge python strangling a deer to death and pulled off a crazy rescue

Here’s how the uploader summarized the intense encounter with nature, according to the Daily Mail:

This Leopard Mother and Cub combination went after a giant Rock Python.The Leopard cub soon gave way for his Mom to take over the attack on the snake.

While on safari in South Africa we witnessed a rare and unusual event. The morning started out with a bang – finding a female leopard (Metsi) in a tree, one of my favorite sightings. After a short while she climbed out of the tree and climbed upon a termite mound and began calling. Soon her cub came out of the brush to join her for a little bonding and motherly love.However, before long the cub was off exploring again and noticed something in the bush and curiously approached to see what it was. It turned out to be a huge Rock Python that began hissing at the cub. This is where the video begins and all bedlam breaks out with vehicles backing out of the way, the cub sitting on the sidelines, and the mother leopard and python squaring off in a battle to the death. Enjoy the show.

Our guide Khimbini, one of the best we have used, commented that the leopard was killing an endangered animal in the form of the Python. The interesting thing in this was watching mom after vanquishing the foe come around behind the cub, who sat intently watching the whole time, and gently push her towards the carcass. Very tentatively she reached out a paw with claws extended to touch the beast. Kind of comical but also incredible intriguing to see a real live lesson in surviving the dangers in the bush. The leopards fed on the carcass and then we were told a clan of hyena came in later in the day and ate the majority of it.”- Video Taker

Amazing Kruger Sighting for the visitors.

Near the end of the video you can see the snake dead in the grass with little leopard carefully approaching the scene of the crime.

The video was recorded during the Summer of 2016.