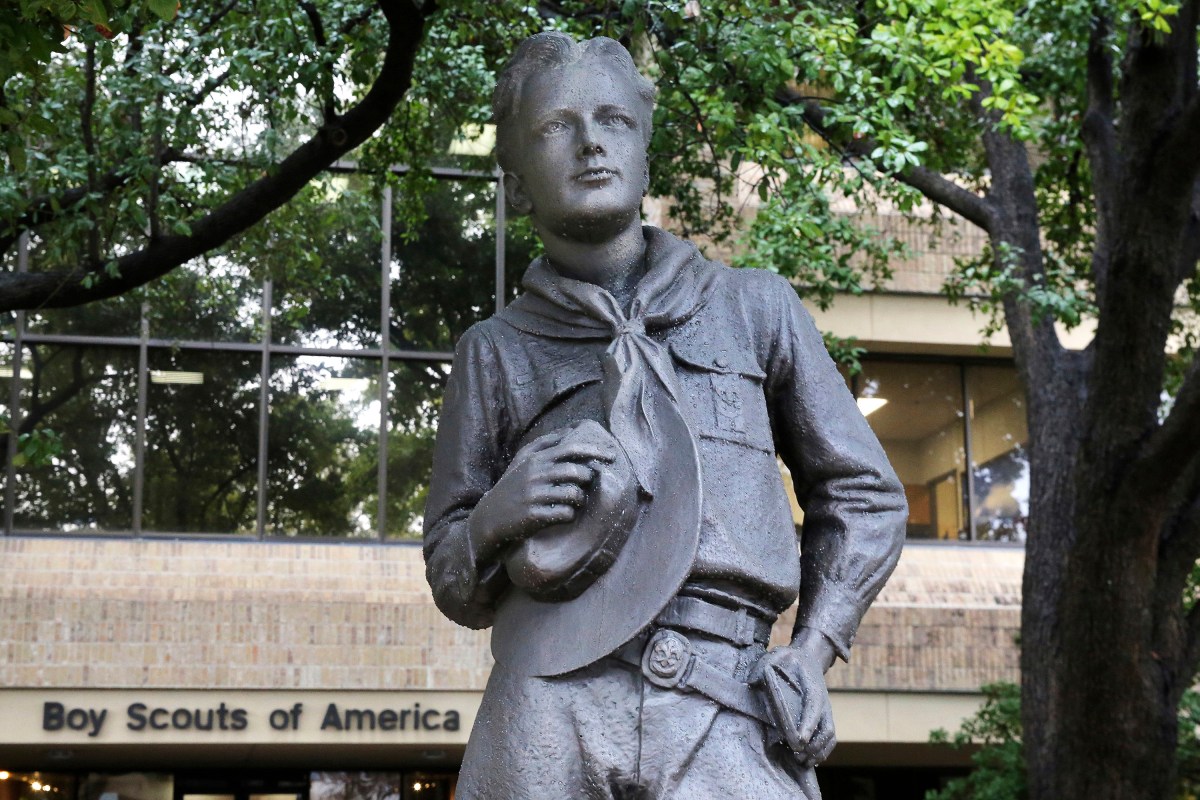 Barraged with sex-abuse lawsuits, the Boy Scouts of America filed for bankruptcy protection Tuesday in hopes of working out a potentially mammoth victim compensation plan that will allow the 110-year-old organization to carry on.

The Chapter 11 filing in federal bankruptcy court in Wilmington, Delaware, sets in motion what could be one of the biggest, most complex bankruptcies ever seen. Scores of lawyers are seeking settlements on behalf of several thousand men who say they were molested as scouts by scoutmasters or other leaders decades ago but are only now eligible to sue because of recent changes in their states’ statute-of-limitations laws.

Bankruptcy will enable the Scouts to put those lawsuits on hold for now. But ultimately they could be forced to sell off some of their vast property holdings, including campgrounds and hiking trails, to raise money for a compensation trust fund that could surpass $1 billion.

The organization encouraged all victims to come forward to file claims.

The bankruptcy petition listed the Boy Scouts’ assets at between $1 billion and $10 billion, and its liabilities at $500 million to $1 billion.

“Scouting programs will continue throughout this process and for many years to come,” the Boy Scouts said in a statement. “Local councils are not filing for bankruptcy because they are legally separate and distinct organizations.”

The Boy Scouts are just the latest major American institution to face a heavy price over sexual abuse. Roman Catholic dioceses across the country and schools such as Penn State and Michigan State have paid out hundreds of millions of dollars in recent years.

The bankruptcy represents a painful turn for an organization that has been a pillar of American civic life for generations and a training ground for future leaders. Achieving the rank of Eagle Scout has long been a proud accomplishment that politicians, business leaders, astronauts and others put on their resumes and in their official biographies.

The Boy Scouts’ finances have been strained in recent years by declining membership and sex-abuse settlements.

The number of youths taking part in scouting has dropped below 2 million, down from a peak of more than 4 million during the 1970s. The organization has tried to counter the decline by admitting girls, but its membership rolls took a big hit Jan. 1 when The Church of Jesus Christ of Latter-day Saints ? for decades a major sponsor of Boy Scout units ? cut ties and withdrew more than 400,000 scouts in favor of programs of its own.

The financial outlook worsened last year after New York, Arizona, New Jersey and California passed laws making it easier for victims of long-ago abuse to file claims. Teams of lawyers across the U.S. have been signing up clients by the hundreds to sue the Boy Scouts.

Most of the newly surfacing cases date to the 1960s, ’70s and ’80s; the organization says there were only five known abuse victims in 2018. The Boy Scouts credit the change to an array of prevention policies adopted since the mid-1980s, including mandatory criminal background checks and abuse-prevention training for all staff and volunteers, and a rule that two or more adult leaders be present during all activities.

Many of the lawsuits accuse the organization of negligence and cover-ups, mostly from decades ago.

“We are outraged that there have been times when individuals took advantage of our programs to harm innocent children,” said Roger Mosby, the Boy Scouts’ president and CEO. “While we know nothing can undo the tragic abuse that victims suffered, we believe the Chapter 11 process, with the proposed trust structure, will provide equitable compensation to all victims while maintaining the BSA’s important mission.”

Among other matters to be addressed in bankruptcy court: the fate of the Boy Scouts’ assets; the extent to which the organization’s insurance will help cover compensation; and whether assets of the Scouts’ 261 local councils will be added to the fund.

“There are a lot of very angry, resentful men out there who will not allow the Boy Scouts to get away without saying what all their assets are,” said lawyer Paul Mones, who represents numerous clients suing the Boy Scouts. “They want no stone unturned.”

Amid the crush of lawsuits, the Scouts recently mortgaged major properties owned by the national leadership, including the headquarters in Irving, Texas, and the 140,000-acre Philmont Ranch in New Mexico, to help secure a line of credit.

Founded in 1910, the Boy Scouts have kept confidential files since the 1920s listing staff and volunteers implicated in sexual abuse, for the avowed purpose of keeping predators away from youth. According to a court deposition, the files as of January listed 7,819 suspected abusers and 12,254 victims.

Until last spring, the organization had insisted it never knowingly allowed a predator to work with youths. But in May, The Associated Press reported that attorneys for abuse victims had identified multiple cases in which known predators were allowed to return to leadership posts. The next day, Boy Scouts chief executive Mike Surbaugh wrote to a congressional committee, acknowledging the group’s previous claim was untrue.

James Kretschmer of Houston, among the many men suing for alleged abuse, said he was molested by a Scout leader over several months in the mid-1970s in the Spokane, Washington, area. Regarding the bankruptcy, he said, “It is a shame because at its core and what it was supposed to be, the Boy Scouts is a beautiful organization.”

“But you know, anything can be corrupted,” he added. “And if they’re not going to protect the people that they’ve entrusted with the children, then shut it down and move on.”

Critics of the Boy Scouts charged that the bankruptcy filing is aimed in part at preventing the disclosure of further damning details.

“This bankruptcy is not about finances,” said Scott Coats, who sued in New York last month over abuse he claimed to have suffered in the 1970s. “This bankruptcy is about the reputation of the Boy Scouts of America and about silencing victims and keeping the truth away from the eyes of the public.”

Mike Pfau, a Seattle-based attorney whose firm is representing scores of men nationwide, said that while the Boy Scouts’ local councils are not included in the bankruptcy filing, the plaintiffs may go after their property holdings, too.

“We believe the real property held by the local councils may be worth significantly more than the Boy Scouts’ assets,” he said. He said one question will be whether the Boy Scouts transferred property to its local councils in hopes of putting it out of the reach of those suing the organization.

Watch: The Girl Scouts Are Suing The Boy Scouts

About the author: David Crary
David Crary is a National Writer for the Associated Press.
View More Articles