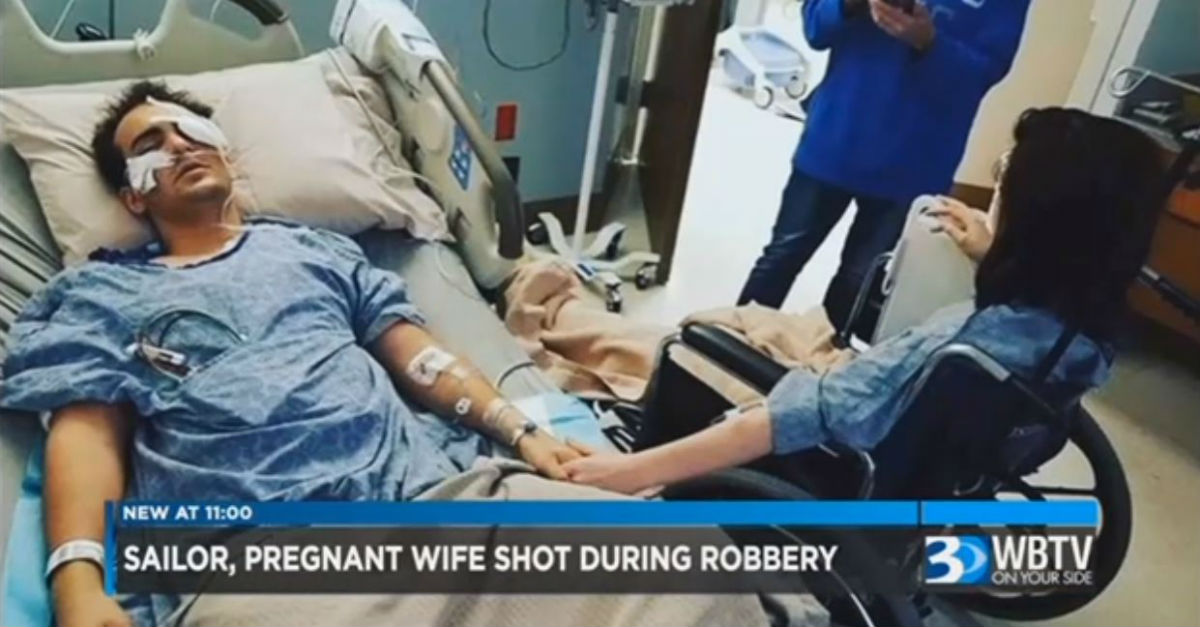 A Navy sailor and his pregnant wife were trying to buy a cell phone from a girl they met online when they were ambushed by multiple men wielding guns. Both were shot several times by the would-be robbers and are now in the hospital recovering.

The couple, identified as Frederick and Emily, are childhood sweethearts, who recently married and moved to the Portsmouth, Virginia area where Frederick is stationed. On Saturday night, they went to meet an 18-year-old girl on the app OfferUp, which allows users to buy and sell goods. But, when they got to her house, they immediately knew something wasn’t right. Ten people surrounded the car, one of whom started firing shots, WGN reports.

Frederick was shot in the arm, chest and temple. His wife was shot in the chest. Fredrick’s sister Cate told WSOC that her brother says that the woman did not come outside and that the men started firing shots without asking for money. Their family set up a GoFundMe page and has raised over $9,400 dollars so far. On the page, they speculate that Fredrick and Emily may have been victims of a gang initiation ritual.

RELATED: The moment this fallen sailor returned home to her family moved an entire airplane to tears

Fredrick lost vision in one of his eyes and underwent surgery on Sunday night to save his other one. His father told WGN that the bullet “missed [Emily’s] heart by centimeters.” In the hospital, the couple refuses to leave each others’ sides.

Portsmouth Police say they’ve seen a rise in crimes stemming from instances where citizens were “lured to secluded neighborhoods.” The department has set up a safe meeting place, outside of the police department, for individuals meeting to sell and buy through OfferUp. They also posted the app’s suggestions for OfferUp buyers.