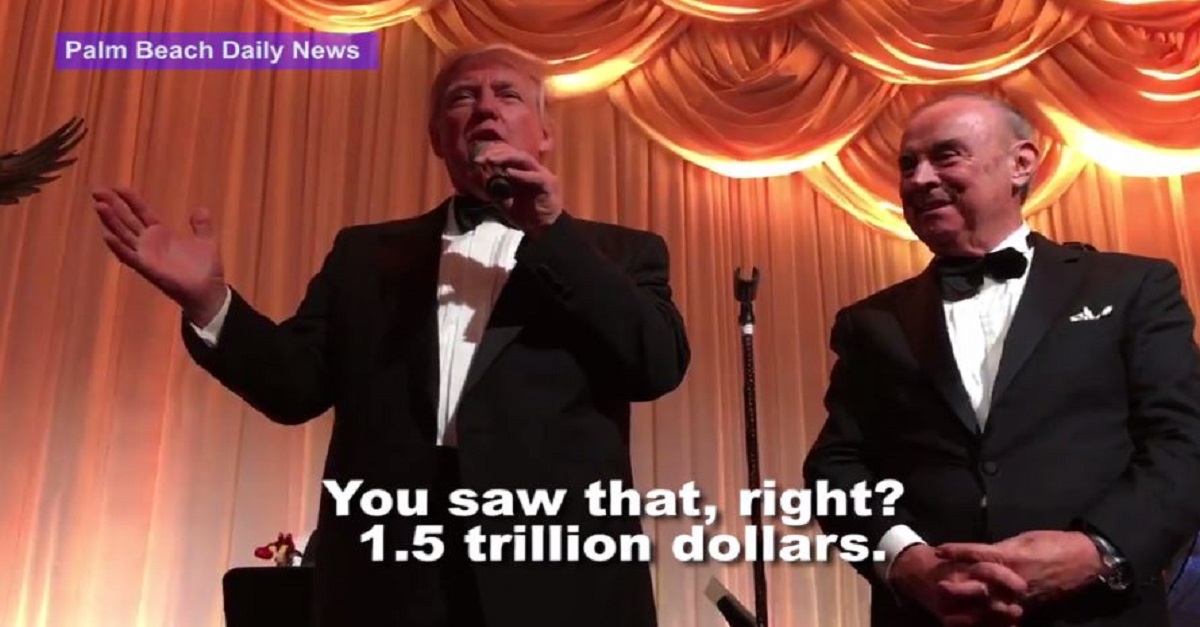 During his speech, Trump touched on Obamacare, the attack that occurred in Turkey that killed 39 people, taxes and regulations and the wall he plans to build.

“And now we have a contract, the F-35 fighter, you saw that, right?” Trump began. “1.5 trillion dollars. But it’s slightly over budget, like 400 million. These numbers are crazy.”

RELATED: Donald Trump?s ?Happy New Year? tweet has cast doubts upon any hope that he?ll put an end to his insults in 2017

New Years Eve with Donald and Melania. On their way to the Grand Ballroom. pic.twitter.com/yx3niSOgoj

Aside from Trump’s family, over 800 people were expected to attend the event, including actor Sylvester Stallone and Quincy Jones, POLITICO reported.

Earlier in the day, Trump tweeted a message wishing everyone a Happy New Year, including his enemies.

?Happy New Year to all, including to my many enemies and those who have fought me and lost so badly they just don?t know what to do,? he tweeted. ?Love!?

Happy New Year to all, including to my many enemies and those who have fought me and lost so badly they just don't know what to do. Love!

2016 was such an incredible year for our entire family! My beautiful wife @LaraLeaTrump made it even better! 🇺🇸🇺🇸 pic.twitter.com/M0SuRGn0il

And just in case you were wondering what the event looked like, here are some gorgeous shots:

On New Year’s Day, Trump tweeted another message to Americans:

TO ALL AMERICANS-#HappyNewYear & many blessings to you all! Looking forward to a wonderful & prosperous 2017 as we work together to #MAGA🇺🇸 pic.twitter.com/UaBFaoDYHe

“Well, the New Year begins. We will, together, MAKE AMERICA GREAT AGAIN!” Trump wrote in a tweet early Monday morning.