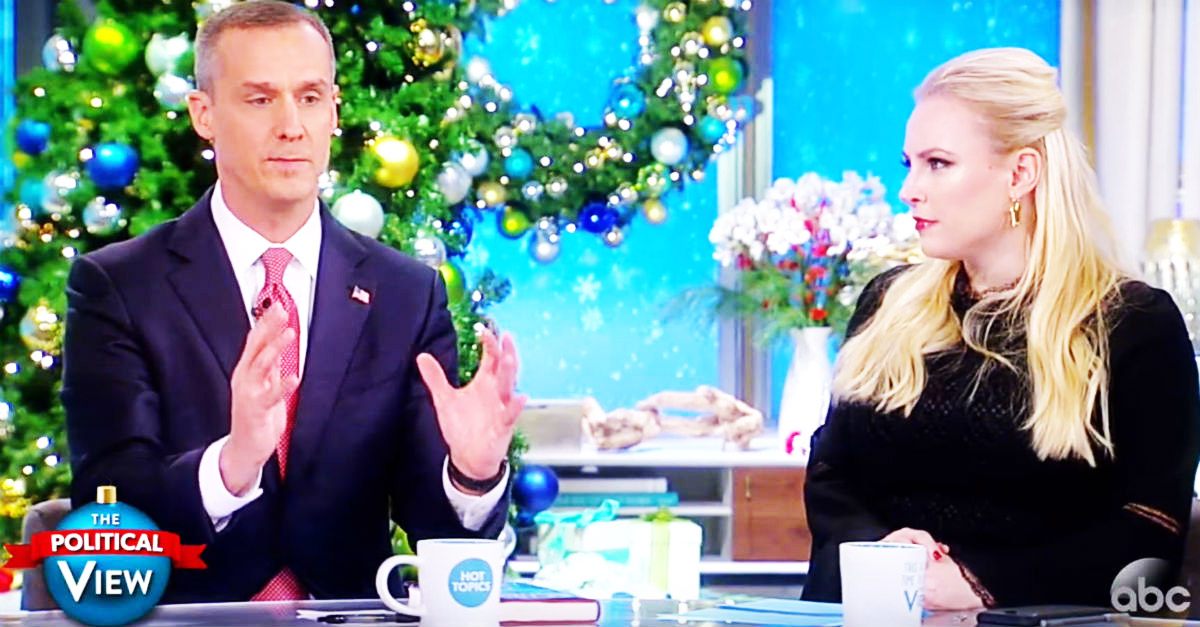 Corey Lewandowski’s Tuesday appearance on “The View” brought on one of the more electric episodes in recent memory. Trump’s former campaign manager (who is now promoting a book) was on the attack.

Lewandowski joined Joy Behar, Sunny Hostin and Meghan McCain, and the conversation got testy. At one point, the guest was going back and forth with Behar when he bellowed “he’s a killer! I want a killer as president! I want to make sure that we are the toughest, greatest nation in the world and that we are safe.”

Moments later, Lewandowski admitted that he “failed” the president as campaign manager, saying “he deserves perfection, he demands it. He wants you to work harder than you’ve ever worked.”

Less than 2 weeks before our new book is released. Let Trump Be Trump – The Inside Story of His Rise to the Presidency – will make a great Holiday gift. Preorder today at Amazon. pic.twitter.com/MtGBfvDooL

Later, Lewandowski defended his former boss against accusations of racism, saying “not only is he not a racist or a misogynist, he’s the exact opposite. Look, I’ve had the privilege of sitting next to him and he doesn’t care if you’re white, green, blue or orange–he doesn’t care if you’re a male or a female.” When asked Hostin asked a follow-up, Lewandowski showed off his inner politician, pivoting to the Kate Steinle trial, and saying “this week, we had a terrible tragedy of justice in my opinion.”

When the women asked Lewandowski about the pedophilia allegations facing Roy Moore, he responded “it’s going to be up to the people of Alabama, it’s not up for me decide.” He also used the opportunity to blast Senator Al Franken (D-Minn.) who has been accused of groping women.

Lewandowski was one of the first people to come on board the Trump campaign when it was still a tiny group. In the early stages of the campaign, he, Paul Manafort and Roger Stone worked together to get the news out that Donald Trump was serious about the Oval Office. He was tossed in June 2016, as Trump’s political allies turned their attention to Hillary Clinton and became skeptical of Lewandowski’s inexperience, per a New York Times report from that summer.

The 44-year-old’s book is entitled “Let Trump Be Trump” and was released on Tuesday. The Washington Post was able to get their hands on an advanced copy and pulled some of the more eyebrow-raising quotes like “sooner or later, everybody who works for Donald Trump will see a side of him that makes you wonder why you took a job with him in the first place.” At one point in the book, Lewandowski and his co-author David Bossie (another top Trump aide) admitted that we “both had moments where we wanted to jump off Trump Force One.”