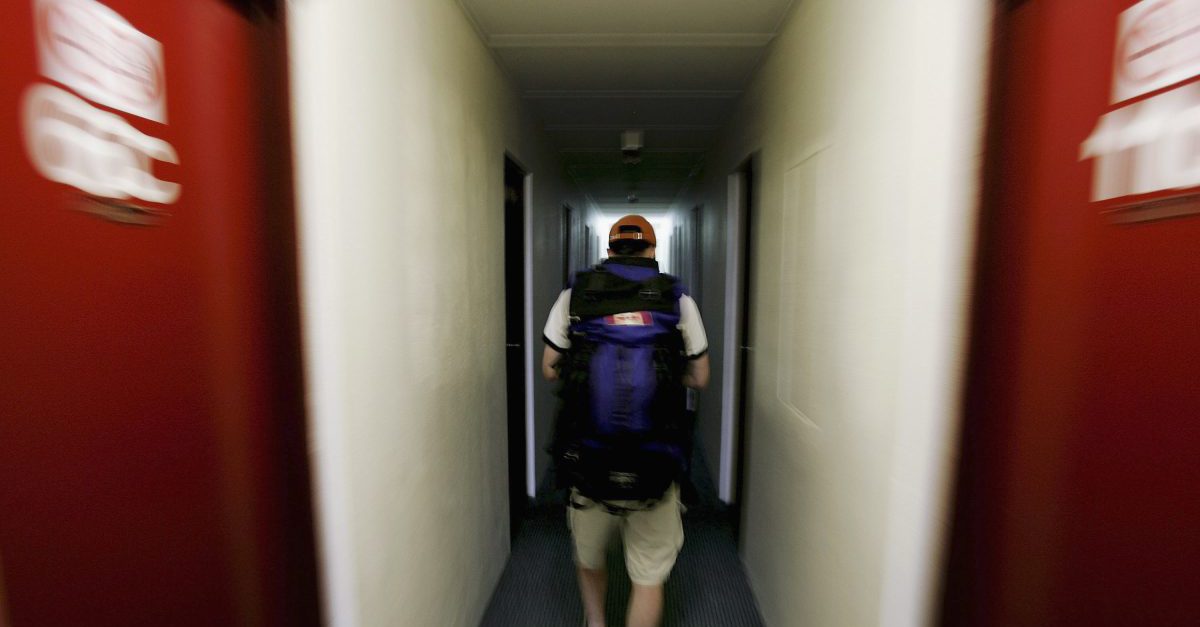 Ian Waldie/Getty Images
DARWIN, AUSTRALIA - OCTOBER 15: Traveller Craig Weather from Canada walks through a dormitory corridor as he arrives at a backpackers hostel October 14, 2005 in Darwin, Australia. The backpacking industry in Darwin, the capital of the Northern Territory is thriving as many travellers decide to begin their jouneys from there. Some backpackers take organised trips to places of interest like Kakadu National Park and the Katherine Gorge while others take local work in the hospitality industry or picking fruit to subsidise their travelling expnses. The popularity of backpacking in the region has not been affected by the publicity of the Falconio murder trial, which begins next week. The case centres around British travellers Peter Falconio and his girlfriend Joanna Lees who were allegedly abducted on a remote road while travelling through the Northern Territory in 2001. The body of Peter Falconio was never found. (Photo by Ian Waldie/Getty Images)

Michigan State University (MSU) requires students to undergo training on cultural sensitivity and inclusiveness, and has a strict anti-discrimination policy. But they’re now taking the fight to whiteboards, which Kat Cooper of MSU Residential and Hospitality Services says have become spaces for harassment.

Under the policy, public-facing whiteboards (such as those on dormitory doors) are banned. Whiteboard surfaces inside dorm rooms are permitted.

RELATED: Reports of sexual assaults on the rise at military academies

Cooper told the Detroit Free Press that the use and functionality of whiteboards “used to outweigh the downsides,” but that’s “not happening anymore.” As students now communicate digitally, whiteboards remain as places to write offensive messages.

Students interviewed by the Free Press see the ban as an institutional bandage over a deeper and more complicated problem.

Yamani Vinson is a junior at Michigan State. She says people can “write racist words on anything […] Are we supposed to get rid of those things too? ” She calls the ban “foolish,” and says taking away whiteboards is an “easy” option when the alternative is to admit and graduate students who hold values that don’t include vandalizing whiteboards with offensive words and symbols.

Aaron Stephens, another student interviewed for the story, agrees. He told the Free Press, “The bigger issue is the fact that someone that’s part of our community would feel the need to use hateful language in the first place. That needs to be addressed further.”