Almost a week after the date, and well after the rest of the country resumed their lives, Donald Trump, President of the United States of America, remains committed to disproving factual statements about the size of his inaugural crowd.

Press Secretary Sean Spicer and White House Chief of Staff Reince Priebus and Counselor to the President Kellyanne Conway already hosted the Administration’s first press briefing and took to “the shows” over the weekend. All of them attempted to check members of the media who were using side-by-side photographs taken from the same vantage point to illustrate their arguments.

That wasn’t sufficient. Today, Trump tweeted a photograph of a photograph added to the walls in the White House. 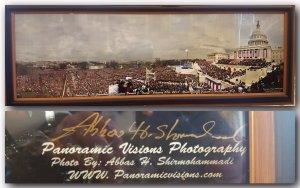 At least the crowd looks nice.