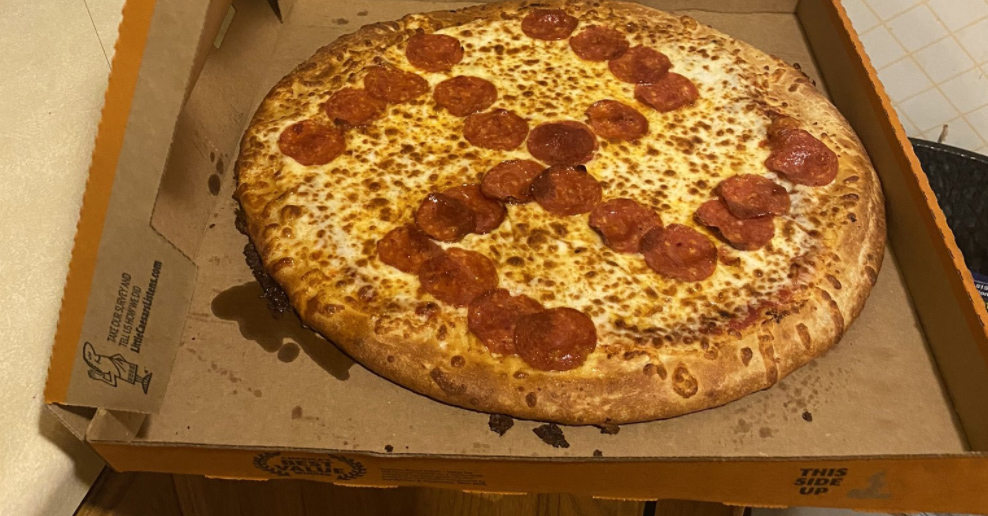 There aren’t a whole lot of ways to make pizza terrible but one Ohio couple got a heaping, hot ‘n ready helping of one such way when they opened their Little Caesars pizza and were greeted with a pepperoni Swastika.

Jason Laska visited the Little Caesars near his home in Brook Park, Ohio to grab dinner for himself and his wife Misty Laska. When he got home and his wife opened the box she was taken aback by the poor — and racist — pepperoni distribution.

So my husband stopped at #LittleCaesars for a quick bite, husband brings this home! I’m truly disappointed. This is truly saddening and disturbing and not funny at all! These aren’t funny jokes and shouldn’t be made period and on company time?! 🤯🤯🤯🤯✊🏻✊🏿✊🏾✊🏽 pic.twitter.com/zQaXecN2se

The couple immediately called the store, which had just closed. The Laskas declined to eat the pizza, opting instead to keep it intact as evidence. Misty Laska posted a picture of the pizza to her Twitter, writing, “So my husband stopped at #LittleCaesars for a quick bite, husband brings this home! I?m truly disappointed. This is truly saddening and disturbing and not funny at all! These aren?t funny jokes and shouldn?t be made period and on company time?!”

Laska later followed up on Twitter, writing, “Racism and hatred is REAL. I?m not a fake. I have no reason to lie. Racist/Hateful jokes are NOT FUNNY and ALOT of y?all are showing your RACIST TENDENCIES! ????? don?t shoot the messenger!”

After the incident, the Laskas received a call from both the store’s owner as well as the Little Caesars corporate office. The store owner explained that the pizza was never intended for the Laskas, or anyone else. It had been made as a joke in poor taste between employees and was accidentally served to a customer. The store owner also informed the Laskas that the employees responsible for the pepperoni Swastika had been fired.

Little Caesars also released a statement on the incident, saying, ?We have zero tolerance for racism and discrimination in any form, and these franchise store employees were immediately terminated. We?re deeply disappointed that this happened, as this conduct is completely against our values. We have also reached out to the customer to discuss this personally with him.?

The Laskas, however, has vowed not to eat at that or any Little Caesars again.

Watch: Trump Vows to Stop Bases Named After Confederates From Being Changed