Out of my way! Trump appears to shove a prime minister as he makes his way to the front of the group 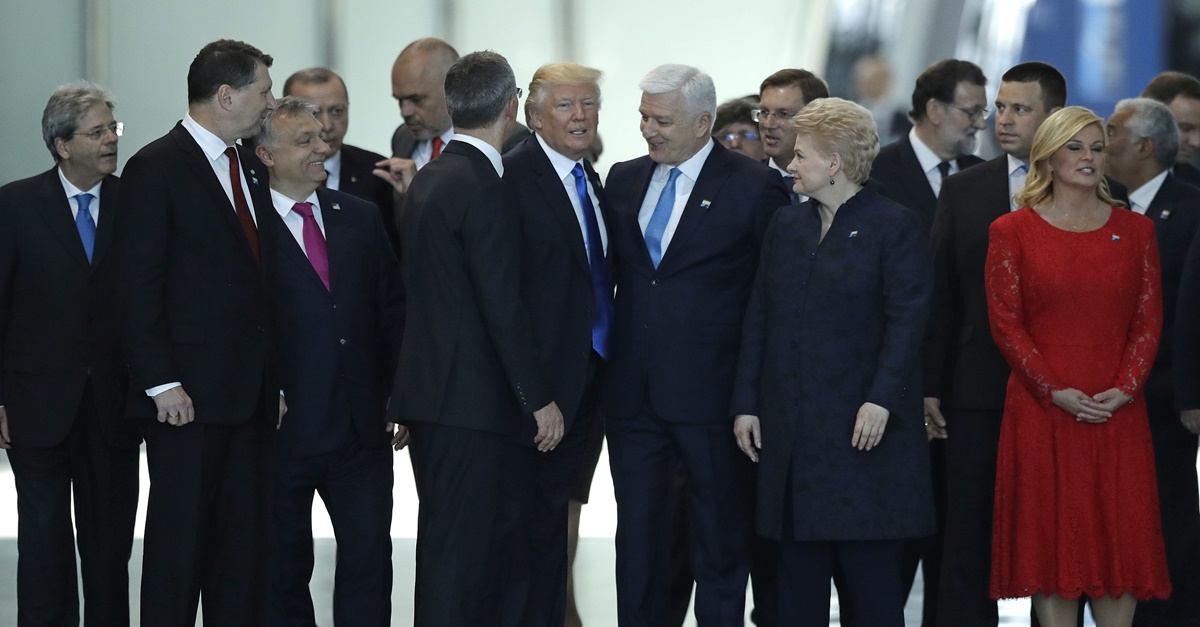 (AP Photo/Matt Dunham)
Montenegro Prime Minister Dusko Markovic, center right, smiles after appearing to be pushed by Donald Trump, center left, during a NATO summit of heads of state and government in Brussels on Thursday, May 25, 2017. US President Donald Trump inaugurated the new headquarters during a ceremony on Thursday with other heads of state and government. (AP Photo/Matt Dunham)

A newly released video clip appears to show President Trump shoving the prime minister out of the way as he makes his way to the front of a group of NATO leaders during a trip to NATO’s headquarters in Brussels, Belgium, on Thursday.

At the beginning of the clip, Trump can be seen in the middle of the group until he suddenly moves Markovi? out of the way and positions himself at the front.

Did Trump just shove another NATO leader to be in the front of the group? pic.twitter.com/bL1r2auELd

Slo-mo: Trump appears to push aside/shove another NATO leader to get to the front of the group. pic.twitter.com/K0OC6QnEL4

While no one can be 100 percent sure what exactly happened – Prime Minister Markovi? himself might not even know – Twitter users had a lot to say about Trump’s barge to the front:

Dear Montenegro: We Americans do not all act like entitled playground bullies. With apologies for our classless president. #Trumpshove #NATO

America’s 45th president was at NATO’s headquarters to deliver a speech at a ceremony to dedicate a memorial to NATO?s resolve after the 9/11 terrorist attacks on the United States. During his speech, Trump criticized NATO members that weren’t paying their fair share in defense funding, saying that it wasn’t “fair” to the U.S. taxpayers.

RELATED: French president Macron just beat President Trump at his own game in a handshake showdown for the ages