A Pennsylvania public school district is apologizing to offended parents for a math homework assignment that included a sex abuse equation problem.

Here’s what the question said: “Angelou was sexually abused by her mother’s ___ at age 8, which shaped her career choices and motivation for writing.”

Below is a screenshot of two questions from a worksheet the teacher downloaded from the internet that sparked complaints from parents at Pennridge High School. 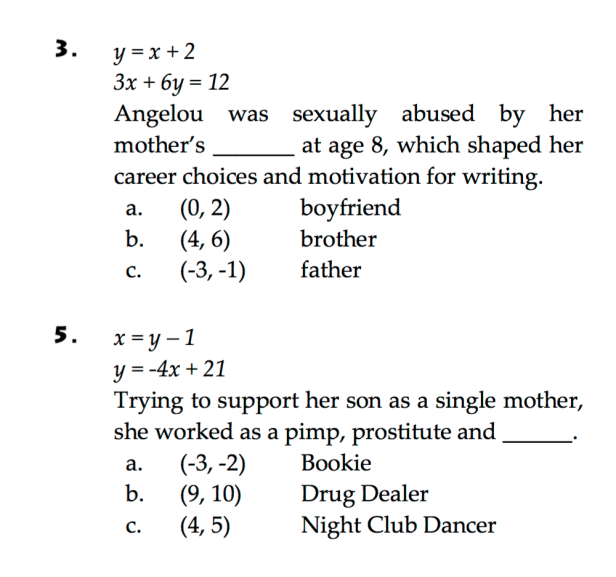 The Angelou referenced here is poet Maya Angelou, and the list of questions were all focused on her life as detailed in her autobiography, “I Know Why the Caged Bird Sings.”

According to NBC 10, the assignment was not part of the approved school curriculum, and the superintendent has apologized to parents.

@PennridgeSD this is far from appropriate & saying it was just downloaded from the net is irresponsible & #nonpology https://t.co/cSTLq23ObQ

“We have received a number of complaints from parents and members of the community regarding a recent high school math homework assignment which contained adult content without a proper context,” Pennridge Superintendent Jacqueline Rattigan said. “The homework worksheet in question was downloaded from a website that allows teachers around the world to share educational resources. It is not part of our approved curriculum.”

“We apologize to anyone who was offended by the content of the assignment and have taken steps to avoid such occurrences in the future,” she added.