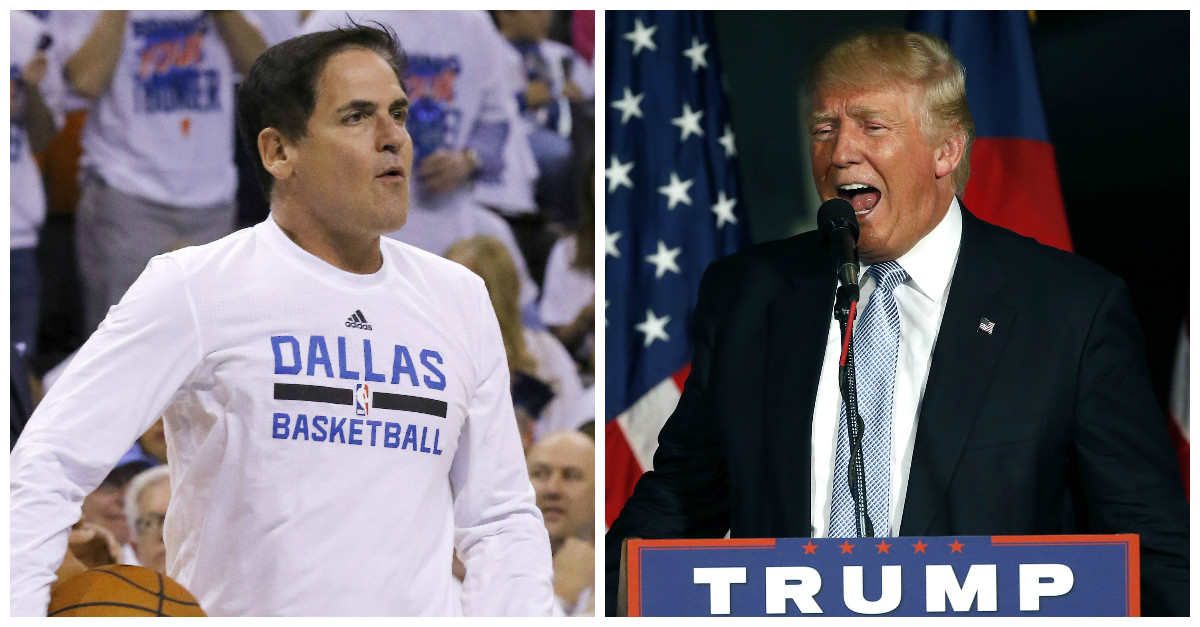 Billionaire Mark Cuban has written a “Dear Mr. President” post in the hopes that the man he criticized throughout the course of his presidential campaign, at times in colorful language, listens to his suggestions about infrastructure spending.

1)With all the dramatic changes coming in driving & transportation,Infrastructure dollars spent on roads/bridges will be misspent.

2) We need to invest in infrastructure that supports and enables the future, not projects that tie us to a less competitive past

3) Technological changes are accelerating. We need to invest in leading the way, not spending on supporting 20th century technologies.

4) I like @POTUS business ideas. It's everything else that concerns me. Homerun Headlines/Exec Orders are easy. Execution/Leadership is hard

RELATED: Mark Cuban buries the hatchet with Donald Trump in a statement that might surprise you

Cuban in recent days has been in a more collaborative mood when it comes to President Trump.

Most recently, Cuban hoped for the best.

Cuban would add that there’s “no reason to rush to judgment.”

“He’s who we put our hopes and dream with. Now it is easier because we haven’t played a game yet,” he said. “No reason to rush to judgment or come to any conclusions now. Let’s see what happens starting Jan. 21 and we’ll go from there. I hope he’s a superstar.”

Before that, Cuban said of a Trump nomination, “I think it’s great. I was an anybody but [Ted] Cruz guy. I like Donald.”

Soon after that, Cuban called Trump a “goddamn airhead” and said he’s “that guy who’ll walk into the bar and say anything to get laid.”

Cuban said Trump was the “best thing to happen to politics in a long time” and that he didn’t “care what his actual positions are” or “if he says the wrong thing.”

He praised Trump for “say[ing] what’s on his mind. He gives honest answers rather than prepared answers. This is more important than anything any candidate has done in years.”

Then, in an interview with Extra, he said Trump was getting “stupider” before our eyes.

“You know what? It’s rare that you see someone get stupider before your eyes, but he’s really working at it […] You have to give him credit. It’s a difficult thing to do, but he’s accomplished it,” Cuban said. “Donald has been at this a year, but you don’t look at him and say, ‘Wow, he’s gotten so much smarter on this topic or that topic.’ In fact, you look at him and say, ‘What the hell are you talking about?'”

In June, Cuban said Trump was no billionaire.

“We know without any question that, as of May 27, [FEC filings show] Donald doesn’t have more than $165 million in cash and securities and bonds,” he said. “[I’m] willing to bet dimes against dollars that that’s pretty much what he’s got.”

Cuban predicted that if Trump won, the market would tank.

“In the event Donald wins, I have no doubt in my mind the market tanks,” Cuban told Fox Business’ Neil Cavuto. “Mark Cuban — if the polls look like there’s a decent chance that Donald could win — I’ll put a huge hedge on that’s over 100 percent of my equity position and my bond position as well that protects me just in case he wins.”

RELATED: After months of hammering Donald Trump, Mark Cuban has made his endorsement

I happen to be a fan of the government investing money into what is commonly called infrastructure projects. I strongly believe that any reasonable businessperson, even one who works for the government, should be able to invest money at 1% interest rates and get a better than 2% return on taxpayer money. But I think its time to rethink how we spend a big chunk of that money.

If it was me spending the money, I would take 100 billion of the proposed $ 1 Trillion dollars in infrastructure investment and invest it in Robotics.

I would invest it in the companies that do R&D, software, and design for robots and every other facet of the Robotics Industry.

Unfortunately, none of the companies that actually make the robotics are based here in the USA. That’s a problem that needs to be solved. We need to help develop domestic companies much like we did the electric car and wind and solar industries. Even if it means trying to help pick winners.

We have to win the robotics race. We are not even close right now.

A new report says China is spending far more on Robotics than we are. China, Korea, EU are offering billions in credits to support their robotics industry. We spend about $100mm. That ain’t gonna work.

The good news, if there is any, is that according to the report China is only spending $ 3B dollars a year on robotics. We need to quickly pass them by.

Why is this so important? Because technological change always accelerates. It never stagnates over time. Which means we are going to face the fact that if nothing in the States changes, we will find ourselves dependent on other countries for almost everything that can and will be manufactured in a quickly approaching future.

We have to face the fact that countries are going to lose jobs to robotics. The only question that needs to be answered is which country will create and own the best robotic technology and have the infrastructure necessary to enable it.

Right now it’s not the USA and that needs to change.

Our “infrastructure” spending should look forwards, not backwards so that we can be the robotics hub of the world.