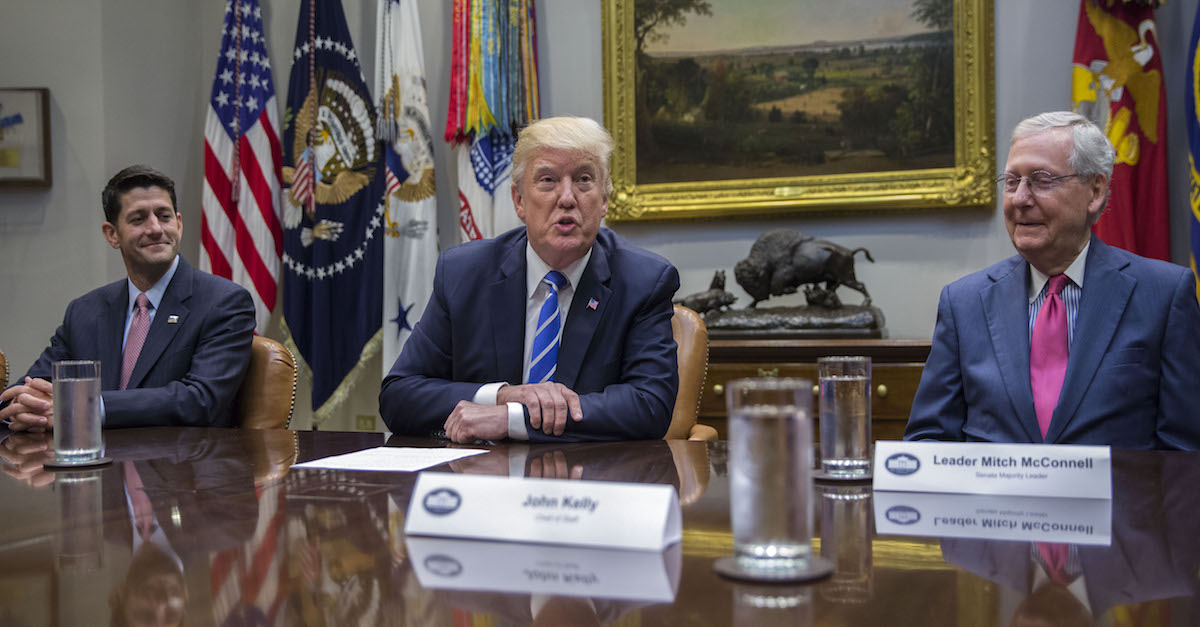 Shawn Thew-Pool/Getty Images
WASHINGTON, DC - SEPTEMBER 05: US President Donald Trump (C), with Speaker of the House Paul Ryan (L) and Senate Majority Leader Mitch McConnell (R), delivers remarks during a meeting with members of Congress and his administration regarding tax reform in the Roosevelt Room of the White House on September 5, 2017 in Washington, DC. (Photo by Shawn Thew-Pool/Getty Images)

White House representatives brushed aside new reports that speaker of the House Paul Ryan is looking to exit his position in the next year.

A Thursday report from Politico alleged that the 47-year-old Wisconsin Republican had told John Boehner that being speaker would be “his last job in politics” and it wouldn’t be a longstanding role. According to the publication, Ryan had shared with confidantes that he was looking to exit following the 2018 midterms and retire entirely. Ryan reportedly did not want his current position and felt like he was “running a daycare center” — but he wouldn’t want to leave without ushering final entitlement reforms and seeing in a new GOP class, Politico reported.

The outlet hypothesized that Ryan — 47 years old and a father of three sons — wanted to spend more time with his family in light of his own father dying at 55. Additionally, Politico reported that Ryan was looking to avoid sharing a ballot with President Trump in the next general election.

White House Press Secretary Sarah Sanders addressed the report during her daily briefing Thursday and denied any allegations that Ryan was looking to step down.

“The speaker assured [President Trump] those were not accurate reports and they look forward to working together for a long time to come,” she said.

Ryan joined Congress in 1999 and only succeeded Boehner in 2015, but according to the dozens of lawmakers, aides and lobbyists interviewed for the outlet, none see the committed Republican holding on even though he’s recently helped the Trump administration in lawmaking successes, NY Daily News reported.

From @SpeakerRyan's office: "Speaker Ryan is fully committed to advancing a bold conservative agenda in 2018 and protecting the majority. Any gossip to the contrary is completely baseless and without merit.” #PaulRyan #Politico #notretiring

The speaker maintained his commitment, pushing back on rumors of his retirement during a press conference on Thursday. A statement from his representatives said, “Speaker Ryan is fully committed to advancing a bold conservative agenda in 2018 and protecting the majority. Any gossip to the contrary is completely baseless and without merit.”