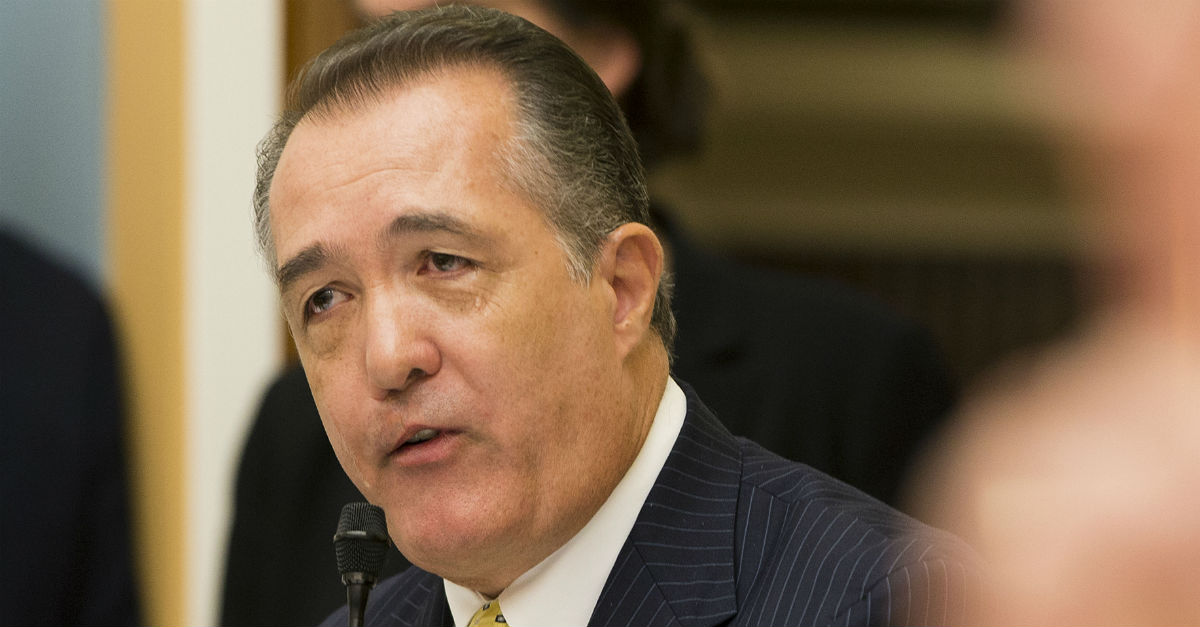 AP Photo/Pablo Martinez Monsivais
A tear begins to run down the cheek of Rep. Trent Franks, R-Ariz., as he delivers his remarks before the House Judiciary Committee hearing at the Capitol in Washington examining the abortion practices of Planned Parenthood, Wednesday, Sept. 9, 2015. Today's hearing is Congress' first since the Center for Medical Progress, a small group of anti-abortion activists, began releasing videos in July showing Planned Parenthood officials casually describing how they sometimes obtain tissue from aborted fetuses for medical researchers. Backed by analysts it hired, Planned Parenthood has said the videos were dishonestly edited to distort its officials' remarks and has denied any wrongdoing. (AP Photo/Pablo Martinez Monsivais)

After announcing that he would resign in late January, Representative Trent Franks stepped down from his position as an Arizona Congressman on Friday immediately after new revelations about his past inappropriate conversations with staffers came to light.

According to reports, Franks repeatedly pressured a former aide into carrying his child — even offering her $5 million to act as a surrogate. The former staffer indicated that he asked her on four different occasions to act as a surrogate in exchange for money after discussing his and his wife’s infertility problems with her.

Additional sources told Politico they had also been approached by Franks about surrogacy while working for him. Both women were concerned that the congressman was asking them to have sexual relations with him, as it was unclear whether he was proposing to impregnate the staffers through sexual intercourse or in vitro fertilization because he reportedly opposes procedures that discard embryos.

RELATED: Rosie O’Donnell and Donald Trump Jr. weigh in on Al Franken’s resignation after the Minnesota senator resigns in disgrace

The representative denied the allegations on Friday via a spokesperson, but acknowledged the previous day that he had indeed discussed surrogacy with staffers and apologized for it. He insisted, however, that he “absolutely never physically intimidated, coerced, or had, or attempted to have, any sexual contact with any member of my congressional staff.” Afterwards, he indicated that he would resign at the end of January — a process that has clearly been sped up a great deal since.

House Speaker Paul Ryan was alerted of the initial accusations two weeks ago when someone contacted his office with “troubling” information about Franks’ behavior toward a former employee. Ryan’s team interviewed the staffer and briefed the congressman on her story. He then urged Franks to step down.

Franks announced the news of his immediate resignation in a mysterious statement that failed to address the allegations and instead pointed to his wife’s recent hospitalization as the reason for his sudden departure:

Arizona Governor Doug Ducey is expected to wait until Monday to announce the dates for a special election for a midterm replacement for Franks.