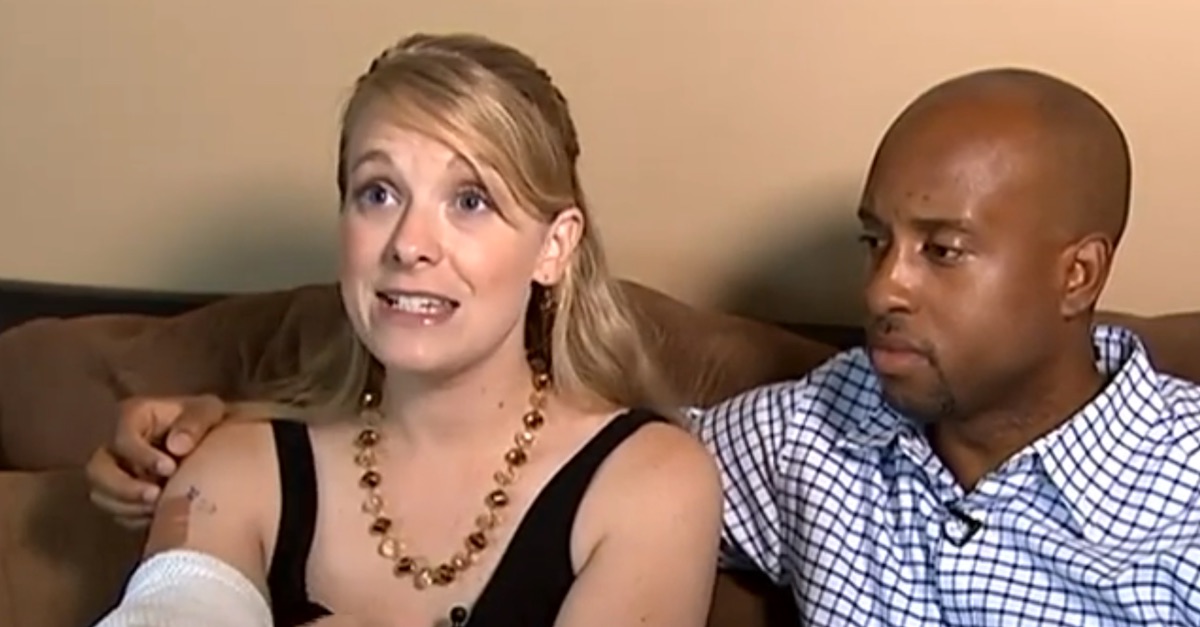 Tiffany Johnson lived to tell the tale of staring down a shark and watching as her arm was torn “clean off.”

RELATED: He ran to the water for a closer look and freaked out at the 14-foot beast of the deep bleeding out

The North Carolina mom of three appeared on camera to talk about the cruise in the Bahamas that she went on last week with her husband, a cruise that would cost her an arm.

Johnson is taking the loss of her right arm surprisingly well.

“I’m just so thankful. I’m thankful to be here,” she told WSOC-TV. She said that while she was snorkeling with her husband James she felt a “bump” under water. When Johnson turned around, she realized this was no mere bump.

A shark was gnawing her arm “clean off.”

Eerily, Johnson described feeling no pain and experiencing “tangible peace” as she stared down the shark that was tearing her arm off.

“I wasn’t in pain, it just felt like I had bumped into something so I just casually turned to my right to look to see and that’s when I was face to face with the shark,” she said. “He had my whole arm in his mouth and he was just floating there, just staring at me.”

Johnson got free from the shark by losing her arm.

“The last time I yanked he had cut [my arm] clean off so I was able to actually get free,” she said. “I felt this tangible peace on me and it was so thick, that I was just calm.”

Johnson is thanking God that she’s lived to see another day and is preparing to get a prosthetic arm.

RELATED: It’s a shark-eat-shark world: fishermen were stunned when a little shark was swallowed up before their eyes

“I’m thankful to be able to share this story and I hope, and I know, that it’s going to change people’s lives because you can’t hear this story and not see God in it,” she said.